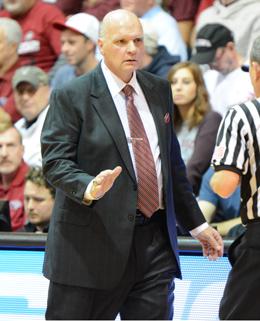 Phil Martelli (above) wasn't thrilled about his team's performance after a win over Maine on Sunday. (Photo: Josh Verlin/CoBL)

A win’s a win, but against a 3-8 Black Bears team, Martelli was looking for a more polished showing from his side. The Hawks had lost two straight Big 5 contests to Villanova and Temple coming in, and they didn’t quite respond to the wake-up call.

“We’re not really walking out of here and saying ‘yeah, that was crisp, that was sharp, that was good enough for the Atlantic 10,’” Martelli said.

Martelli complained about his team’s shot selection in particular. The Hawks have failed to crack 40 percent shooting in half their games, and they came into Sunday shooting just 41.3 percent from the field, one of the 50 worst marks in Division I hoops.

In those sub-40 percent games, St. Joe’s is 2-3. The two wins have come against Sacramento State and Maine; against the majority of D-I teams, those performances aren’t good enough.

The Hawks had much higher expectations entering the season, ready to take on a weak Atlantic 10 conference with five returning starters from last year. Instead, they’re 5-5, with injury problems.

After placing third in the A-10 preseason poll, St. Joe’s had its sights set on the program’s first NCAA tournament appearance since Isaiah Miles and DeAndre’ Bembry led the Hawks to a conference title in 2016. Right now, however, the team is looking awfully frail.

Senior guard Shavar Newkirk, who recovered from a torn ACL in time for the opener, is leading the team in scoring, but his 35 percent field goal shooting is a sharp decline from the 47 percent mark he put up through 12 games last year.

Against Maine, Newkirk scored 19 points to go along with four assists, but that came on a 6-of-18 (33 percent) clip from the floor.

“Some of his decisions were poor today, but he was more forceful and he has been more forceful,” Martelli said. “I’m going to have a long discussion with Shavar about [how he’s] got to step up…he’s still not there yet.”

Martelli was upset about a lack of focus from his team on both ends of the floor. On the defensive end, the point of emphasis was that the Hawks, and Newkirk specifically, allowed too many easy drives to the hoop.

“When you’re fighting to be a respectable team, you can’t give up straight line drives,” Martelli said.

Early on against Maine, that wasn’t the only defensive issue. St. Joe’s allowed Isaiah White to score 11 straight points for the Black Bears. Maine, normally a 30-percent shooting team from deep, made seven of its first nine triples.

It’s finals week, but more than the tests themselves, Martelli thinks that having an empty campus is affecting his players.

“I still have to get their attention,” Martelli said. “They’re kids. They all want to go home.”

The Hawks still have a game to play before they can go home for Christmas. Wednesday’s contest at the Basketball Hall of Fame Holiday Showcase in Uncasville, Conn. won’t be against one of the bottom 20 teams in the country.

Coached by Chris Mullin, the Red Storm is now at 9-2 with wins over UCF and Nebraska. The Johnnies will want to close out their non-conference schedule with a win over St. Joe’s.

After Christmas comes conference play for the Hawks. They open A-10 play at George Washington on Dec. 30, so gaining momentum starts to become crucial at this point in the season. Going into the holiday with a win over St. John’s certainly could be the spark St. Joe’s needs.

The flip side is obvious.

“If we do the same on Wednesday, we’re going to lose and everybody’s going to be hanging their head and you’re going to be stomping your way through Christmas,” Martelli said. “I don’t want to do that.”