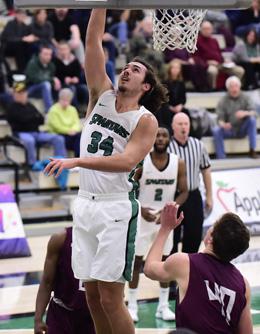 Dalton Myers (above) and York stayed unbeaten against Division III opponents with a win over previously-unbeaten No. 14 Swarthmore. (Photo courtesy David Sinclair Photography)

YORK — When you’ve got a number of guys up and down the roster who can really shoot the basketball — and from deep, too — it’s easy to flash the green light repeatedly.

Especially when those area-code looks continue to fall with regularity.

Using their prowess from the perimeter repeatedly, especially since the opponent was determined to take away all sorts of things in the paint, York popped and popped. So, bagging a season-best 15 treys — from seven guys wearing white uniforms — the unbeaten Spartans bounced out of Charles Wolf Gymnasium Wednesday night with an 83-79 victory over previously perfect Swarthmore.

Swarthmore came into Wednesday night’s encounter as the No. 1 team in City of Basketball Love’s Division III regional rankings, one spot above the host Spartans.

Swarthmore also made the trip west from Philadelphia’s Main Line as the No. 12 squad in D3hoops.com’s latest national poll.

So, in other words, it was a sparkling result for a program that’s been on the rise the past few years. Particularly since final exams begin Thursday morning on a two-part campus that some 60 years ago was still home to the Country Club of York before that entity relocated.

Dalton Myers netted a team-best 22 points  — 17 in the second half — while Matt Scamuffo pocketed 20 more. The Spartans (8-0), who trailed by as many as seven (30-23) with 7:08 remaining in the opening half, also picked up 12 points apiece from Blayde Reich and Jared Wagner.

“It’s always good seeing one go down,” said Scamuffo, who missed several early opportunities from deep before finally getting dialed in. “That kind of just boosts your confidence. We’ve got shooters on our team. We’re gonna shoot them and we’re gonna make them.”

And while the visiting Garnet was holding a 63-62 lead with 6:01 to go when Cam Wiley drained both ends of a 1-and-1 opportunity, Scamuffo’s 3-point pop from the left corner off a Mike Frauenheim dish pushed the Spartans back in front to stay. Six consecutive freebies — four by the 6-7 Myers and two more from the 6-5 Reich — capped a 9-0 spurt that had York up 71-63.

“We have people that can score the ball with ease,” added Scamuffo, who moved into 19th place on York’s all-time scoring list (1,126 career points). “Just wearing them down and making baskets.”

While Swarthmore was able to pull within a deuce on Yonda’s conventional three-point play at the 2:20 mark, Myers made the front end of a two-shot look. An instant later, after Reich slapped the offensive rebound back out front, Wagner canned the last of York’s 15 3-balls.

A Myers jump hook and three freebies enabled the Spartans to close out their latest success.

“We have a lot of people that can shoot 3s,” said Myers, who moved into a tie for 16th place on York’s all-time scoring list with 1,152 career points. “We knew what kind of defense they were going to play. If they double the post, they’re going to be open for 3s and that opened me up at the end of the game.

“That’s just a successful equation if you’ve got people shooting and it helps me out.”

Yet it was York’s ability to bang away from the perimeter that enabled Matt Hunter’s club to erase and build leads throughout a game that went back-and-forth for 40 minutes and featured 12 lead changes.

“It was two pretty good teams going after each other,” said Hunter, who is in his sixth season. “It was a game of little mini-runs. There were a lot of 6-0, 7-0 spurts, and we kind of got the last one there.

“And we made enough free throws to wrap it up.” 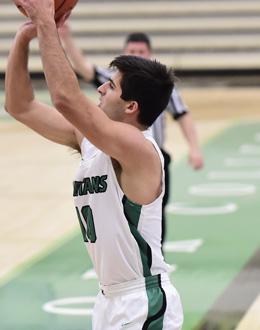 Frauenheim and West Chester Henderson product Jason Bady added one trey apiece for a balanced York club that typically prefers the 4-out and 1-in alignment that Villanova prefers.

So, ball movement is key.

“It gets somebody open,” Myers admitted. “If I get the ball in the post and somebody’s dropping in — that’s what they did in the beginning of the game is double the post — having so many shooters out on the perimeter it leaves somebody open. If we have an open 3, you shoot ‘em.

“We have people that can knock them down every time. It’s a good way for us to run stuff.”

Unselfishness is another critical component of the Spartans’ attack.

“Hopefully, it’s really difficult [to defend us],” Hunter said. “Our guys have done an awesome job of embracing ‘I don’t care if I score, as long as we get a great shot.’ That’s what our mentality is. We’ve done an unbelievable job of figuring out where the ball needs to go and when it needs to get there and being ready to do your job when it’s your chance.”

And those treys were necessary because of Swarthmore’s physical inside triumvirate of Zac O’Dell, Robbie Walsh and Nate Shafer. Since Walsh and Shafer were able to lean on York’s bigs in the paint — Myers and/or Reich — the painted area wasn’t a productive source of points.

Until late, when O’Dell and Shafer fouled out.

Just one example of York’s flexibility arrived just past the midway point of the second half when Myers buried a trey — off a Bady delivery — and then worked inside for a jump hook set up by Wagner’s slick inbounds pass. Space had been created just by the mere threat of York cashing in from deep.

York also needed those efforts from deep because Swarthmore outscored the Spartans 38-14 in the paint and had 27 second-chance points to the hosts’ seven. Hey, whatever works.

Yet to be 8-0 — and hopefully climbing — really is special to Myers and Scamuffo. Especially since both players suffered through 5-20 seasons when they first arrived in York.

“Coach Hunter always talked about the process and taking a page out of the Sixers’ book,” Scamuffo recalled. “It’s all attributed to Coach Hunter and the players that he brings in. Once everyone buys into the system, we could say that we beat the [12th-ranked] team in the country.”

Myers, who redshirted last season following shoulder surgery, actually went through a pair of 5-20 campaigns as Hunter was just piecing together his first few recruiting classes.

“When he recruited me, he talked about a culture he was trying to build here and that I’d fit into the culture,” Myers said. “I came here and there were people on the team that you could tell weren’t bought in. Every year, those people either left or we gained more that just added to the culture.

“We have a family right now. The culture’s high and everybody’s bought in.”

Life in the Capital Athletic Conference also was extremely difficult.

Right now, however, York is the lone unbeaten in league play with a 4-0 mark. The Spartans last season finished 17-10, reaching the CAC semis before falling to Salisbury.

“I’d be lying if I said if it was anything but exciting,” Hunter said. “Those guys deserve a ton of the credit. They battled through a couple of years where we didn’t string together results like this. So those seniors deserve it as much as anybody. I couldn’t be happier for them that results have changed.

“We do focus on the process and we don’t want this to be our best month of the season. We have to find ways to continue to improve and playing our best basketball in February. So it’s finding ways to challenge the group and finding things to get better at and keep working at that.”

Still, these guys are mighty effective at staying in the moment.

And figuring out how to put the ball in the basket when the Spartans make the relatively short drive to Carlisle to play Dickinson College — one of Swarthmore’s Centennial Conference playmates.

“That’s another great challenge against a team that’s been really good within the region since [head coach Alan Seretti] has been there. So, it’s figuring out what can we do to be effective.”

“We might be 8-0, but we’re 0-0 for the next game,” Myers admitted. “We’ve got to get better for next time and there’s stuff we need to work on from this game. We came in knowing that they were 8-0 and we had a chip on our shoulder to beat them. That’s over now and we’ve got to move on.”