Though the PIAA is still a week and change away from its official start of competition, the first high school basketball in the Keystone State is getting ready to tip off.

The Inter-Academic League and Friends’ Schools League, the two major independent school leagues in the Philadelphia area, allowed their teams to start competition last week, with several inter-league games taking place, though neither has started league play just yet.

Here’s a brief look at each of the leagues, and how we expect their races to break down over the course of the season: 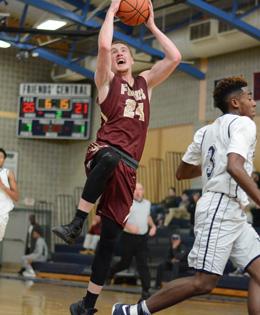 Christian Ray (above) and the Haverford School are in search of the program's first title since 1999. (Photo: Josh Verlin/CoBL)

Favorites
For the last five years, the Inter-Ac has been controlled by Germantown Academy. The Patriots’ split the title with Episcopal last season, but they stood alone atop the six-team league the four years prior. This year looks like it could finally be the one to snap that streak.

The Haverford School returns its entire roster from a year ago, and third-year head coach Bernie Rogers knows he’s got the talent to win the school’s first league title since 1999. Leading the way are 5-10 senior guard Kharon Randolph, a USciences commit who averaged  16.2 ppg, and 6-5 junior Christian Ray, a tough wing forward who led the Fords with 17.6 ppg last year. Joining those two are 6-0 junior Jameer Nelson Jr., 6-1 junior Gavin Burke, 6-3 junior Asim Richards, 6-1 senior Nasir Smith and 5-10 senior Joe Dignazio, all back from last season.

Certainly, the Fords are not a lock to win the league, there are a few other teams that they’ll have to overcome to win the 10-game round-robin for the first time in nearly two decades. But considering they finished one game behind the leaders last year at 7-3 in league play (19-7 overall), and considering those two teams above them each graduated no fewer than three key seniors, there’s a clear void for Haverford School to step up into.

Dark Horses
Just because Germantown Academy graduated seniors Evan-Eric Longino (23.7 ppg) and Kyle McCloskey (20.5 ppg), along with Cole Storm, Josh Brownstein and Andrew Towne, don’t count Jim Fenerty’s Patriots out of it. They’ve won at least a share of the last five league titles, and the 29th-year head coach has led his teams to 17 championships in his time at the Fort Washington school. They’re going to have to lean heavily on versatile 6-5 junior Brian Basile, but look out for Jordan Longino -- the younger brother of Evan-Eric is a 6-3 wing guard with an advanced game for his age; he has the potential to be one of the best prospects around in his class. But they’re going to need a bunch of former JV players to step up immediately in their first year in the Inter-Ac; if any program can rely on that and thrive, it’s GA.

The team that tied with the Patriots for last year’s Inter-Ac title at 8-2 in league play, Episcopal Academy also has to replace some program stalwarts in forward Nick Alikakos and Conner Delaney. Alikakos, a 6-7 forward, finished his career sixth on the EA scoring list with 1,547 points; he’s now doing a prep year at the Hill School. Delaney, a 6-0 point guard, is now the starting guard at D-III Johns Hopkins after averaging 18.8 ppg as a senior at EA. Now, head coach Craig Conlin will have to rely on a pair of scoring wings, junior Matt Dade and Alex Capitano, plus sophomore guard Colin Chambers to keep it rolling in 2017-18.

Under the direction of fifth-year head coach John Harmatuk, Malvern Prep has been lurking in the wings for a few years now, but unable to break through. They’re still young, but this could be the year the Friars make a good leap up the standings after finishing fourth at 5-5 a year ago. They have two 6-5 seniors in Billy Corcoran and Brady Devereaux, but both of them will be pitchers in college; it’s the underclassmen that are the true basketball players. Sophomore Deuce Turner was the team’s leading scorer a year ago (19.3 ppg), but his classmates Isaac White, Spencer Cochran and Rahdir Hicks -- who’s reclassifying into the 2021 class -- all hit double-figures with regularity. It’s the most talent Harmatuk has had to work with in his time at Malvern, now it’s time to see what he can do with it.

Players to Watch
Episcopal Academy’s Matt Dade is a versatile 6-4 junior scoring wing with a solid post game, and he can hit tough shots off the bounce. He’ll benefit from the arrival of Alex Capitano, also 6-4, and the reclassified sophomore is a smooth 3-point shooter with good athleticism and a nose for the rim. ...The top freshman in the league looks like Germantown Academy’s Jordan Longino. An athletic 6-3 guard, he’s already got a smooth jumper and sees the floor well to make plays. Junior Brian Basile is a versatile 6-5 wing forward who can score inside and out, with a developing handle. ...Haverford School’s Christian Ray is a double-double machine, a 6-5 wing with an unending motor and terrific offensive touch, especially within 15 feet though his outside shot is coming around. Kharon Randolph is a 5-11 point guard with a scorer’s touch from all three levels, he’s compact but talented. Junior guard Jameer Nelson Sr., son of the former St. Joe’s standout, could be in for a breakout season after the 6-0 guard came on strong during the summer.  ...Malvern Prep’s impressive sophomore group is led by 6-3 guard Kieves “Deuce” Turner, an athletic slasher who could blossom into one of the area’s top scoring guards before long. Point guard Rahdir Hicks, a reclassified freshman, is a shifty 6-0 lead guard who can drive and kick. Isaac White and Spencer Cochran, two more sophs, could be double-digit scorers as well. ...Penn Charter features senior guard Mason Williams, a bouncy 6-3 wing guard who loves the mid-range jumper but won’t hesitate to pull up from deep. Sophomore guard Ryan Holmes is a steady 6-2 combo guard who will have the ball in his hands a lot more this season. ...SCH Academy will rely heavily on a pair of talented sophomore guards, Ke’Shawn Williams and Delonce Hines. Both slight and speedy, the two can get up and down the court in a blur and don’t fear contact en route to the rim. 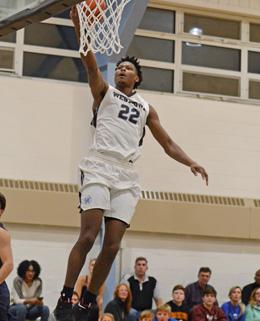 Favorites
For the last four years, the Friends’ League has belong to Westtown. The Moose are 39-1 in the FSL over that span, and are coming off an undefeated run through the league that saw them capture the title with a 28-point win in the 2017 championship game over Shipley. And yes, it’s true that they’re no longer graced by the presence of Mohamed Bamba (Texas), Brandon Randolph (Arizona) and Anthony Ochefu (Stony Brook). But just because Seth Berger lost a Lamborghini and a Ferrari doesn’t mean he doesn’t have a few more stashed in the garage.

Once again, the Moose are stocked with high-level talent. It all starts, of course, with Duke commit Cameron Reddish, the ultra-talented 6-8 guard who will be in the NBA in two years’ time. He and Indiana commit Jake Forrester are the two Division I-bound seniors, but there’s more; their classmate, Harrison Eichelberger, will see a significant role off the bench. Junior guard Jalen Gaffney is new to the mix, as a transfer from Lawrenceville Prep (N.J.), while sophomores Noah Collier, Seyon Kapaan and T.J. Berger (Seth’s son) will see big steps up in contribution as well. They’ve got a huge target on their backs, but that’s nothing new.

Dark Horses
Certainly the team with the best chance to dethrone Westtown is the only other one in the league with a Division I commit. Shipley School senior guard Sam Sessoms has already declared his pledge to Binghamton, but before he goes he’s got his eyes on leading his Gators to an upset or two. He’s one of four returning starters for Shipley, along with big man Ray Somerville, senior wing Tommy Sobelman and sophomore Khai Champion. They also add athletic wing Chaz Owens, a 6-3 Wissahickon transfer and re-classified junior, who will help out a ton on the glass and with some inside toughness and scoring ability.

Friends’ Central certainly took a hit with the loss of athletic wing Justin Steers to Rocktop Academy -- the 6-6 senior is sidelined anyways after knee surgery -- but Ryan Tozer still has some punch in the tank. Senior wing forward Touré Mosley-Banks and transfer forward Josh Friday give the Phoenix size inside, and juniors Bryce Spriggs and Myles Robinson give them more size and versatility on the perimeter.

Players to Watch
The gem of the 2018 class locally for several years, ever since he played varsity ball for Haverford School as an eighth grader in 2013-14, it’s now finally Cameron Reddish’s final season on the local prep scene. The 6-8 wing guard, ranked No. 3 in his class by ESPN, can play all five positions, though he’s best on the ball, where he can play makes and hit shots with the best of them. ...Reddish’s classmate, Jake Forrester, is a super-bouncy 6-9 wing forward who loves to run the floor and play above the rim on both ends …Westtown’s Noah Collier is a 6-7 lefty wing who is a big-time threat in the open floor, and John Camden is a 6-6 freshman with range to the NBA 3-point arc. …Shipley’s Sam Sessoms is as shifty as they come with the ball in his hands, as the 5-10 guard knows how to change speeds and use hesitation moves to find space. ...Shipley big man Ray Somerville is 6-9 and strong, with several Division I offers under his belt. This year will be critical for his development. ...Gators sophomore Khai Champion is a very good shooter with feel and spots all over the court; his brother Chuck Champion is a sophomore at Loyola (Md.). ...Friends’ Central’s Toure Mosley-Banks is headed towards scholarship territory, as the 6-6 forward is versatile within 15 feet and a good athlete. ...FCS junior Myles Robinson is a 6-4 wing working his way back from an ACL tear that cost him his sophomore season. His classmate, Bryce Spriggs, is a solid-bodied 6-2 guard with an improved scoring touch. ...Germantown Friends senior big man Pietro Berghella is a solid offensive weapon with good hands and a tough rebounder, and at 6-9 gives them real size in the middle.