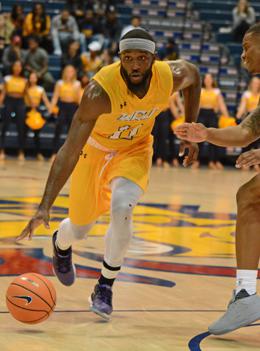 As Frank Rokins started practicing with the West Chester Golden Rams basketball team this past summer, he noticed how intense the practices were, and how hard the team worked day in and day out.

Coming from Essex County College, a junior college in Newark, New Jersey, Rokins played on one of the best defensive teams in the nation amongst Division II-level JUCOs.

Conversely, West Chester was struggling through a 14-15 season (11-11 PSAC) in which it ranked 277th defensively in the NCAA’s second division in scoring defense. Rams opponents were scoring on average 84.2 points per game while shooting 45 percent from the field.

That’s a dropoff from a year prior, when they gave up 72.8 points per contest while making it to the PSAC championship game.

“Last year, we felt we lacked a lot of toughness and on the defensive we gave up too many easy baskets,” West Chester head coach Damien Blair said. “Our goal was to go out there and find the toughest guy out there that had some offensive skills.”

Rokins was contacted his sophomore year by the Rams’ coaching staff after Blair, a tenth-year coach at WCU, heard about him through word of mouth. As a sophomore at St. Mary’s High School (N.J.), Rokins tore his meniscus. At the time of his graduation from high school, he was being recruited by local D-II programs Bloomfield and Georgian Court, among others.

The stocky guard averaged 10.6 points and 7.6 rebounds per game last season at Essex. After working hard on developing his shot and ball handling skills, Rokins decided he would join the West Chester program.

“Unlike other coaches that were recruiting me, [Blair] wanted to make me better,” Rokins said. “I felt like coach Blair was very meaningful. He knew my weaknesses, and he came to me and talked about my leadership role on the court, and not the athleticism part the other coaches did.”

After a 10 point, six-rebound performance off the bench in the team’s first contest of the year against Wesley, Rokins was inserted in the starting lineup, and hasn’t looked back. So far this year, he leads the Rams in rebounding (8.6), blocks (1.3), and steals (1.7) and is third on the team in scoring at 11.0 points per game.

“He’s doing a heck of a job,” Blair said on Rokins’ impact so far this season. “Not many guys coming from high school or coming from JUCO can transfer over into college and be a major impact. He’s done a great job picking up our defensive philosophies, and offensively, he picks up everything and he’s a leader on the team.”

So far this season, West Chester is allowing 65.1 points per game, good for third in the PSAC. They also rank second in offensive rebounds in the PSAC.

Both stats are thanks in part to Rokins’ play. He’s been an animal on both sides of the floor, fitting in well with his new system.

Marking both guards and forwards alike, Rokins used all of his 6-3, 220-pound frame to battle down low with the opponents, and doesn’t let his size affect how hard he plays.

“I just feel like no one can rebound with me if I play hard,” Rokins said. “It’s not about height, it’s about toughness and who wants it more.”

“When we saw him play the first time, we were like ‘wow he’s undersized, but he’s really good,’” Blair said of Rokins. “He can guard a 6-10 guy in the post, and he go guard a point guard. That’s what makes him really good.”

Rokins’ defensive ability fits in nicely in the Rams’ system, matching the versatility of 6-5 guards Jackson Hyland and Tyrell Long. Each are able to switch off guards and big men without a huge drop-off and are forces at rim with their scoring and rebounding. The trio accounts for over half of the Golden Rams’ points, rebounds, and blocks so far this season.

Long is leading the Rams with 21.3 points per game, while Hyland averages 18.7. Both guards have an advantage over opponents with their heights, and Rokins has been a pleasant complement to their play styles so far this season.

“When they’re (Hyland and Long) going to the basket it’s nearly impossible to stop,” Blair said of his blossoming core. “If you’re gonna press us, we’re going to get a lot of opportunities to attack the basket and finish and then Frank (Rokins) is cleaning everything up that they miss.”

In just seven games, Rokins has helped elevate a team missing its leading scorer from a year ago, Malik Jackson (19.2 ppg) to an unbeaten start. Throughout the process, Rokins has shown a level of talent that Blair believed he could perform at before Rokins ever donned a West Chester uniform.

“If he was an inch taller, we probably wouldn’t have gotten him, and he would’ve been a Division I basketball player,” Blair said. “I still think he is a Division I basketball player but people passed on him because he’s probably an inch shorter than the guys they have on their team. He’s a very talented kid that’s unselfish and he’s the glue that's holding us together.”