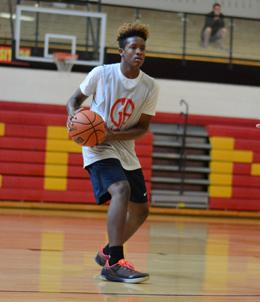 Jim Fenerty has always enjoyed the “climb” more than he has actually arriving at the “mountaintop.”

Fenerty has won 17 Inter-Ac titles in his 29 years at Germantown Academy, but the run to claiming those titles, he says, has been the most rewarding part.

Take last year, for example, as his team started the league slate 2-2, including a 51-44 loss in its first matchup of the season with Episcopal Academy. If the Patriots were going to win another Inter-Ac title, they would ultimately have to win out -- and that’s precisely what they did.

They finished out the regular season with six straight victories, one of which was a payback win over the Churchmen, to clinch at least a share of the Inter-Ac crown for the fifth consecutive year. Fenerty harkened back to his focus on the ascent.

“We’ve been to the mountaintop a lot of times,” he said, “but the climb, with all the adversity we faced, when you do get to the top it’s even better.”

Germantown Academy (22-7, 8-2) owed much of its success last season to two of the most accomplished players in program history.

Add on the contributions of fellow seniors Cole Storm, who averaged 5.5 points per game and continued his basketball career at Washington College (Md.), Josh Brownstein and Andrew Towne and Fenerty had yet another strong senior class in a recent run of them. The Patriots season ended with a loss to Westtown in the Pennsylvania Independent Schools Athletic Association semifinals.

All five starters from a year ago are gone and Fenerty knows he has a younger team than he has been accustomed to. Many players on this year’s team were on last year’s roster but Fenery has always been steadfast in how he distributes playing time with a class as deep as the class of 2017.

“People would say, ‘You’re starting five seniors. You should throw a couple of the young guys in there,’” said Fenerty, who also eclipsed 600 career wins last year. “The bottom line at GA is the best players play and those five seniors were the best combination of leaders.”

Fenerty has awarded three players the right of captain this season: Brian Basile, Colten Smith and Jordan Keys. Basile, a 6-5 junior wing, was the Patriots’ sixth man last year, averaging 3.1 ppg. Smith, a 6-1 junior guard, is committed to the University of Pittsburgh for baseball. While he did “dress varsity” last season, as Fenerty said, he should see a lot more minutes this season. Keys, a 6-3 forward, is the lone senior on this year’s team and Fenerty notes that “his leadership has been outstanding.”

Basile has seen his role change from a year ago but has enjoyed the transition it has brought on.

“It’s definitely a change from last year going from the sixth man to a captain,” Basile said. “I’ve had to become a leader. Coach Fenerty has pushed me to mature more as a basketball player and lead this team. It’s harder but I’ve embraced it.”

While Evan-Eric may be gone, Fenerty still has the opportunity to coach another member of the Longino family. Jordan Longino, a 6-4 freshman, is the Patriots starting point guard and Fenerty has already seen what should make him a tremendous player in his program.

“He’s pretty smooth and polished. He loves to play the game,” Fenerty said. “He’s a different player than Evan-Eric in that he’s not as physical but he’s very smooth. He’s going to play point guard for us as a freshman. I have high expectations for him.”

Fenerty’s team should get a big boost inside with the return of 6-5 junior forward Elijah Wroten. The First Team All-Inter-Ac offensive lineman with the Patriots football program returns to the hardwood after taking a year off. He played as a freshman but sat out last season after his football recruitment picked up. He recently went on official visits to Notre Dame and Penn State in the fall.

Three other members of the football team, 6-4 sophomore forward Hans Lillis, 6-4 junior forward Tayshaun Mack and 5-9 freshman Lacey Snowden should be in the mix for minutes this year. Lillis is the type of player that “likes to rebound and play defense” and “goes against bigger guys and doesn’t back down,” as Fenerty describes.

Two other players to watch are 6-4 sophomore forward Lucas Traina, who had five points vs Penn Charter last season, and 5-9 sophomore guard Zach Anderson, who Fenerty said “needs playing time and experience because he has all of the skills.”

Fenerty has said “it’s the youngest team that I can remember having here at GA” but Basile feels there is a lot of talent on this team to be competitive in the Inter-Ac even with such an inexperienced squad.

“People were a little worried about how we were going to be especially losing Evan-Eric and Kyle,” Basile said. “They were two of the best players in the area but we’re ready to come out and prove a lot of people wrong. We have a lot of talent and determination to succeed this year.”

The Patriots impressed in their season opener as they downed Cristo Rey, 67-52 behind 22 points from Basile, 20 from Longino and eight from Anderson. The non-league slate also includes matchups with Perkiomen, St. Joe’s Prep, Cardinal O’Hara, Abington Friends and Friends’ Central. From there, they will open the Inter-Ac portion of the schedule against Malvern Prep on January 5.

Fenerty will be the first to admit he has not discussed or referenced the possibility of winning a sixth straight Inter-Ac title, because each team he has had is different and each season brings about a new set of challenges.

“We have not talked about championships at all and I never do,” Fenerty said. “When we walk off the court at the end of game, we want to be a better team than when we started and that’s exactly what we’re going to do.

“We have our work cut out for us and we know no one is going to feel sorry for us. They’re tired of us winning the league and I don’t blame them. We’re going to show up and play hard.”