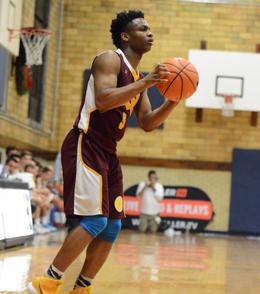 Posh Alexander (above) led Our Saviour Lutheran to a win over Westtown to close out the PSA Showcase. (Photo: Josh Verlin/CoBL)

The Pro Scholars Athletics (PSA Cardinals) program took over the Hill School for the second year in a row on Sunday, with a prep school showcase featuring teams from the Philadelphia region all way up into New England. Four games were regular-season matchups between out-of-state or private school teams that had already begun their seasons, two others, involving PIAA schools, were scrimmages with resetting scoreboards after each quarter.

Here are our staff’s picks for standouts from the day’s six games/scrimmages:

Posh Alexander (Soph./Our Savior Lutheran, N.Y.)
Widely touted as one of the top lead guards in the 2020 class -- he was invited to the USA Basketball U16 training camp this summer, though he didn’t make the team -- Alexander did plenty to entertain in Lutheran’s 66-56 win over Westtown to close out the day. The 5-11, 165-pound lead guard got things going with a between-the-legs bounce pass behind him to a teammate for a layup, but that was far from the only impressive dime he made. Alexander also showed off his scoring chops, with a smooth outside jumper and a fearless driving/finishing ability. He finished with 15 points, seven assists and three steals, though he sat out most of the fourth quarter.

Cole Anthony (Jr./Archbishop Molloy, N.Y.)
Anthony has basketball in his blood. The 2019 guard is the son of former NBA player Greg Anthony. He is currently the top-ranked point guard in the 2019 class and is ranked No. 6 overall by ESPN. Anthony contributed in every single way for Archbishop Molloy in the team’s scrimmage with Neumann-Goretti. On offense, he scored 21 points and added five assists. He also had several other passes that led to foul shots for Molloy. Anthony was also all over the place on defense. He picked up three steals and one block. The 6-foot-2 guard even grabbed nine rebounds.

Tyler Bertram (Jr./Vermont Academy)
While sharing the floor with teammate Simisola Shittu, one of the top players in the 2018 class, Bertram still found a way to stand out on Sunday in Vermont Academy’s game against the Hun School. The 6-foot-3 guard was arguably the top shooter at the event. He poured in 16 points, making four shots from three-point range. This is Bertram’s first season at Vermont Academy after transferring from Cooperstown (N.Y.), where he scored 1,879 points in three seasons.

Moses Brown (Sr./Archbishop Molloy, N.Y.)
Brown stood out the moment he walked into the gym on Sunday. The 7-foot-2, 260-pound center had a size advantage on Neumann-Goretti’s 6-foot-9 forward Marcus Littles and capitalized. Brown, who is ESPN’s No. 17 recruit and No. 2 center in the 2018 class, had 19 points, grabbed eight rebounds and blocked two shots. He could have had an even bigger day offensively, but after making three of his first four free throws, he went 2-of-10 from the line in the second half.

Jake Forrester (Sr./Westtown School)
Forrester, a 6-foot-9 forward with some guard skills, is one of the main reasons Westtown is so fun to watch. His incredible athleticism gives him the ability to throw down a jaw-dropping dunk in a moment’s notice and he did not disappoint on Sunday. Forrester scored 18 points and grabbed 10 rebounds for a double-double. Most impressive from his performance on Sunday may have been his defense in the low post, where he swatted away four shots and disrupted several others. 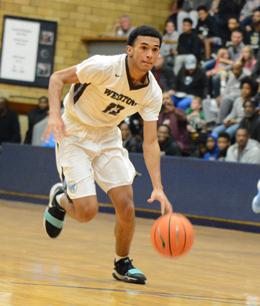 Jalen Gaffney (Jr./Westtown School)
The matchup between Gaffney and Alexander was one of the most fun to watch on Sunday. With Cam Reddish sidelined, Gaffney had the ball in his hands quite a bit. The 6-foot-3 guard was instant offense for Westtown. Gaffney scored 21 points and added nine assists, including seven in the second half. The highlight of his day came when he drove down the middle of the lane and dunked over two Our Savior Lutheran defenders. Gaffney made two threes, but also did a great job of attacking the rim. Nine of his points came from the free-throw line.

Mikeal Jones (So./Girard College, Pa.)
An athletic 6-8 forward, Jones did most of his work in the paint on Sunday. The versatile forward finished with 25 points on the day, most of which came in the second half. Jones displayed an improved touch around the rim, and looked much more confident in his mid-range jumper. He also served as a rim protector for Girard, rejecting some of Peddie’s shots around the rim, and altering the ones he didn’t block. One of the more physically imposing players in the matchup, Jones was having his way on both ends of the court. Schools such as Villanova and VCU had assistants on hand to watch Jones lead Girard in their scrimmage.

Jordan Kellier (Jr./Redemption Christian, Ma.)
Only 6-4, Kellier played in the paint for Redemption, grabbing rebounds and scoring on second chance points. The Jamaican native finished with 12 points, all of which came in the paint. Kellier finished well with both hands around the rim, and was using his body very well on the defensive end to create space to pull down rebounds. When he wasn’t putting back missed shots, Kellier was setting up his teammates with passes out of the post. He played a big role in keeping Redemption in the game, making big plays when Phelps would go on a run.

Terrell Prince (Sr./Peddie School, N.J.)
A native of College Park, Georgia, Prince was attacking the basket at will against Girard. A 5-11 guard, Prince used his built frame to bully his way to the basket, where he finished strong over the Girard frontline. He was also disruptive on the defensive end, leading the way for the Peddie full-court press. His quick feet and hands lead to many deflections and turnovers. The speedy guard lead Peddie with 19 points on the day, all of which came in the paint. Whenever Girard looked like they were making a run to get back in it, Prince was seemingly always there to keep peddie on top.

Jared Rhoden (Sr./Our Savior Lutheran, N.Y.)
Rhoden struggled with his jump shot at times on Sunday, but he still finished the game with 21 points, including 13 in the second half. Rhoden also had five assists, five rebounds and three steals to pad his stat line in Our Savior Lutheran’s win against Westtown. The 6-foot-5 wing was tough to stop in the lane, especially in the second half when he made five free throws. The ESPN three-star recruit is set to play at Seton Hall next year. 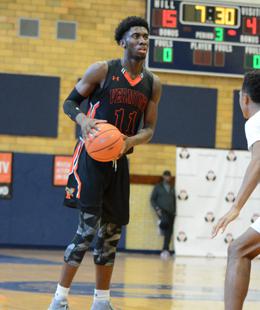 Simi Shittu (above) was arguably the most impressive player in the gym on Sunday. (Photo: Josh Verlin/CoBL)

Simi Shittu (Sr./Vermont Academy, Vt.)
The No. 6 player in the 2018 class according to ESPN, Shittu was a dominant two-way force as Vermont Academy handled the Hun School (N.J.) by a 40-point margin. A 6-9 forward with a powerful, athletic build, Shittu finished with a game-high 29 points in the win, adding in at least a double-double’s worth of rebounds (rebound stats were not kept for this game). Shittu got quite a bit of that production on dunks, whether of his own creation on drives or thanks to an alley-oop lob from a teammate. More than just a run-and-jump athlete, Shittu displayed terrific court vision, making several cross-court and no-look passes to his teammates; not all were right on the mark, but the play-making aptitude is clearly there. He’ll be playing at Vanderbilt next fall, and certainly has one-and-done potential.

Aquil Stewart (So./Girard College, Pa.)
Only standing 5-foot-6, a whole foot smaller than his teammate Jones, Stewart showed no signs of backing down on Sunday morning’s scrimmage against the Peddie School, as he nailed his first four 3-point attempts. Peddie’s pressure helped Stewart sneak behind the defense and find himself open beyond the arc. He hit a floater late in the second quarter to put him up to 14 points, which he ended up finishing with. With Girard playing without key contributors Brandon Smith and Daiquan Copeland, Stewart was looked to as a scorer today, and certainly didn’t disappoint. The Cavaliers are state runner-ups, and Stewart looks to be an x-factor for them this season.
~~~