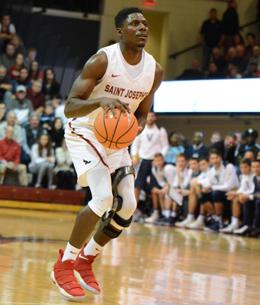 Shavar Newkirk (above) and St. Joe's had another rough night from the field in losing to No. 4 Villanova. (Photo: Josh Verlin/CoBL)

After hanging around for the first 16 minutes against No. 4 Villanova, the Hawks let down their guard, falling 94-53 in a rivalry game dubbed the “Holy War.”

Here are some thoughts and takeaways on St. Joe’s, which falls to 4-4 on the year:

Protecting the ball hasn’t been a problem for the Hawks this season; coming into Saturday, the team ranked third in the nation with 8.7 giveaways per game.

What has been an issue for St. Joe’s is getting the ball in the basket.

On the season, St. Joe’s is now shooting 40.9 percent on field goals and 32.4 percent from beyond the arc.

St. Joe’s head coach Phil Martelli thinks the team’s shot-making woes are a combination of rushed shots and not shooting with conviction.

“I think we go a little fast, in our shot routine. Instead of stopping and shooting comfortably, I think we have guys that rush to get the ball out of their hands,” he said. “This was about shot makers and not shot takers. We had a lot of shots taken, but not with the intent of making that shot.”

With Villanova pressing the majority of the game, St. Joe’s often lost a good 10-12 seconds off the shot clock, which could explain players feeling rushed to fire up shots.

Those extended possessions also led to a slower tempo for the game, and as a result, the Hawks took 30 shots in the first half and 64 in the game, less than Martelli would have hoped.

“I never thought that we comfortably got into offense,” he said. “We had a specific way that we wanted to run offense and it was more based on skill and we come out of the first half with six turnovers...to have six in the first half meant that some of our skills met really good defense, really aggressive defense.”

This lack of shooting efficiency will really start to hurt St. Joe’s once the conference schedule rolls around, but the Hawks have plenty of time to get the ball rolling in the right direction before then.

As for methods to reverse the trend, there are a few things that will come into play.

Firstly, St. Joe’s is waiting on a couple of health concerns. Shavar Newkirk, who averaged 20.2 ppg on 46.6 percent shooting last season before tearing his ACL in December, is still not at 100 percent, and right now is averaging 16.5 ppg on 36.2 percent shooting. Sophomore Charlie Brown has yet to take the floor the Hawks, and he will be a major factor in the team’s offensive gameplan.

Shooting also involves lots of up and down swings. The team hasn’t found its rhythm yet, and the main approaches to finding it are getting up shots in practice and getting stops on the other end.

“Shooting is about a rhythm game, and I feel like we relied too much on our jump shots,” Newkirk said. “A lot of us are putting in effort, but we’ve just got to play at our pace, get transition buckets to help us with our outside game.”

The Hawks haven’t gotten many transition buckets this season. Against ‘Nova, they were outscored 9-0 on fast breaks.

“When you get stops, you get to run out to get easy layups to get your momentum going,” Newkirk said. “That’s what he have to work on.”

St. Joe’s next game is Dec. 9 at Temple, so Martelli has a week to work on finding that rhythm before the Hawks’ next Big 5 clash. They’ll be hoping to score more than 53 points in that one. 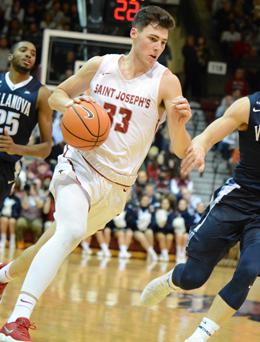 Taylor Funk (above) continued the strong start to his freshman season with a 13-point outing against 'Nova. (Photo: Josh Verlin/CoBL)

Freshman Funk continues to star off the bench

The Hawks’ shooting bug doesn’t seem to have affected freshman Taylor Funk in the slightest.

Funk came into his first Holy War with 22 made three-pointers, 39th in the nation, and he added three more triples to that total against Villanova, going 3-of-7 from deep and 5-for-9 overall en route to a 13-point showing against the Wildcats.

His 14.6 ppg rank third on the team, but they are by far the group’s most efficient.

Through his first eight college games, Funk is shooting 51.9 percent from the field and 48.1 percent from 3-point range. His freshman season has drawn comparisons to Jameer Nelson from Martelli, and it so far has been one of the more successful in program history.

“I play with a lot of confidence and that’s what every basketball player should do,” Funk said “If you think the shot’s going in, it’s probably going in. If you throw it up to just throw it up, just to get a shot up, it’s probably not going to go in.”

Offense certainly isn’t a problem for the 6-9 forward; his defense is the reason he hasn’t yet nudged his way into the starting lineup.

Despite his size, Funk has largely played on the wings for St. Joe’s, and when fellow big men Pierfrancesco “Cecco” Oliva and Anthony Longpré are on the floor, that creates a defensive matchup against a smaller, faster player.

As a result, Funk has had to guard wings for the first time in his career. It’s been a struggle.

“I’m getting put in some situations where I have to guard a wing and I’ve never done that before in my life because I was always a big guy. I was always guarding the big guys,” he said. “Anthony’s bigger than me, Cecco can guard bigger than me, and I’m stuck on the guards…That’s on me, that’s not on anyone else.”

Despite coming off the bench, Funk played 28 minutes against Villanova, second-most on St. Joe’s, and is averaging 25.5 mpg.

He’s getting starter’s minutes, so as far as he’s concerned, it doesn’t matter which five players start the game.

“I’m getting starting minutes and that’s good enough for me,” he said. “It doesn’t matter who starts, it just matters who’s out there.”

“What’s the difference? If you’re going to play the second-most minutes, who cares who starts?” Martelli added. “You’re a player, go out there and be a player.”

For weeks now, Martelli has been giving the same spiel regarding sophomore Charlie Brown: despite his three PhDs, he’s not medical. When the doctors tell him Brown’s ready, he’ll play.

Brown, who is still recovering from a left wrist fracture, sat out his eighth straight game to start the season against Villanova. After having surgery on Oct. 24, his timetable seems to continue to lengthen.

Martelli was frustrated with rumors he has seen via email and social media about Brown’s status, saying people are “chasing false narratives around.”

Ultimately, he’s still leaving it up to the doctors.

“When the doctors tell him he’s cleared, his conditioning will be fine, and he’ll play.”