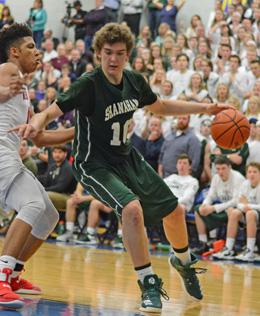 Too often, Doyle said, Dodds would look to pass. Even though the 6-7 forward is an able an willing passer with a high basketball IQ and always running motor, the Eagles head coach wanted his forward to be more selfish.

Dodds averaged 12.7 points and 7.8 rebounds per game last season, but Doyle thinks the Eagles’ senior forward can soar to even higher heights this season. He’s been a varsity player all four years of high school.

“I’ve been constantly working out and training to ensure I have the confidence to make shots and produce,” Dodds said. “I’m always making sure I’m the hardest worker, that everyone can look to me and see that I’m pushing myself.”

This offseason, Dodds has worked to develop his interior offensive game, his scoring ability, and his mentality when he has the ball in the post. Instead of always looking to pass, Dodds has showcased his all-around ability, catching the eye of multiple Division II programs.

“He’s made huge strides in the spring and summer, taking on the leadership role,” Doyle said. “He was always strong defender and great rebounder, but he’s continued to develop his offensive game to become the go-to guy we’ve been looking for.”

Dodds announced his commitment to Gannon on November 11, ahead of his senior season at Shanahan. He first heard from Gannon head coach John Reilly over the summer during showcase camps. After visiting the school, seeing the business program, and meeting the team, the rising senior decided that Erie, Pa. is where he would spend his next four years, studying business.

“When I went down to visit I really did like the city of Erie,” Dodds said. “It looked like a great business school, and every player seemed liked they loved playing there.”

Last season, Gannon finished 18-10, with a 15-7 record in the PSAC. The Golden Knights lost in the conference semifinals to Kutztown in overtime. When Dodds arrives on campus in the fall of 2018, he’ll be playing alongside senior big man Evan Phoenix, who will be the only returning player from Gannon’s starting five. Phoenix is averaging 16.0 points and 9.2 rebounds per game on the low block through six games this season, while the Golden Knights have a 4-2 record.

Before he’s off to Erie, Dodds has unfinished business in high school. Shanahan turned heads last season with its performance in the Ches-Mont. The Eagles finished second in the league with a 19-9 overall record, 10-2 in the league. They came up just short from a league title, losing in overtime to Coatesville.

Much is expected of Shanahan this season as they return a trio of seniors. With Dodds, point guard David Angelo, and wing Thomas Ford all back for one last season, the Eagles will look to go even further than last season in the playoffs, when they lost to Martin Luther King in the first round of the 5A state playoffs.

“We’re just trying to build off of last year,” Doyle said. “As much as we did achieve, we fell short of what our goals were, which were to try to win the league.”

One of the biggest improvements Doyle is hoping for this season is having someone he can turn to in the biggest moments when the Eagles need a score. Doyle said he hopes Dodds can be the leader Shanahan needs to take the next step. To win a league title, to make a states run, the offense runs through Dodds.

“Sometimes, you have to be a little more selfish as one of the best players on the court, and take the ball a little more,” Doyle said. “We’ve been working with Kevin to do that.”

With his new and improved confidence and offensive ability, Dodds says he’s ready for the challenge.