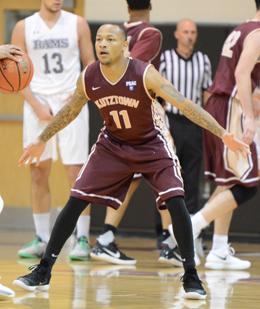 Rafiq Marshall (above) has endured a tough journey to get to his senior year as a starter at PSAC powerhouse Kutztown. (Photo: Josh Verlin/CoBL)

Rafiq Marshall has had the odds stacked against him.

As a freshman in high school seven years ago, his father was shot and killed. After transferring high schools a couple times, Marshall was not allowed to play basketball during his senior year, costing him an opportunity to get recruited to play in college.

The Philadelphia native has persevered through it all.

Now, in his senior season at Kutztown, Marshall is hoping he can be a role model for others with similar stories. He scored a season-high 15 points in Tuesday night’s win at Jefferson with his two younger brothers in the stands.

“I’m just doing this for them, my family,” Marshall said. “Just trying to go as far as it takes me.”

Marshall spent his first two seasons in high school under coach Isaiah Thomas at Sankofa Freedom Charter. The Overbrook Park native then played his junior year at the now-closed Robert E. Lamberton High School. He transferred to Simon Gratz before his senior year, hoping to end his high school career there.

However, Marshall never got the opportunity to finish out his high school career. He was deemed ineligible by the Pennsylvania Interscholastic Athletic Association and despite his best efforts, which even included a trip to the PIAA’s office in Mechanicsburg, Pennsylvania, he wasn’t allowed to play his final season.

With no team to play or practice with, Marshall continued to train. He said he regularly woke up at 6 a.m. before school to work out. When he got home, he said, he worked out again.

“I knew I was going to be alright,” Marshall said. “Just from my work ethic, I was pretty confident.”

After high school, Marshall had some thoughts of entering the workforce, but his mother and basketball pushed him to go to college.

Maranetta Marshall told her son he needed more than a high school degree and that she would help him financially if he continued his education. Marshall knew some people at Cheyney University, and the location close to home was a good fit.

Rafiq Marshall walked-on to the team before eventually earning an athletic scholarship. Maranetta said the loss of his father was part of Rafiq’s motivation throughout.

Marshall scored 664 points and tallied 160 assists during his three-year tenure at Cheyney. He led the team in scoring with 14.6 points per game last season. However, he wanted a change for his final college season.

Kutztown coach Bernie Driscoll recruited Marshall out of high school and the two continued to have a relationship throughout Marshall’s first three seasons at Cheyney. When Marshall was granted a release from Cheyney, he decided to transfer to Kutztown.

“Rafiq’s a good kid,” Driscoll said. “He’s had some really awful, awful events in his life and he’s, you know, he’s got a great core about him, he cares about people. He’s got a little chip on his shoulder, which is understandable, which is truly, truly understandable and what we’re trying to do, and what we’ve tried to do with Rafiq, is just get him to start focusing that energy in a way that is positive.”

Cheyney went a combined 5-74 in Marshall’s tenure there, never winning more than two games. He wanted to experience a winning environment to end his college career.

Kutztown is coming off a season in which it won 26 games and made it to the Pennsylvania State Athletic Conference championship game. They’ve made four NCAA Tournament trips under Driscoll, now in his 18th season as head coach.

Driscoll has made a habit of picking up players like Marshall, who perhaps weren’t the highest-recruited in high school, but have become successful college players.

“Our nickname for our team is the Land of the Misfit Toys,” Driscoll said. “That’s what we are. You look at us. We don’t have a lot of scholarship money and we keep competing at a pretty good level. These guys...they welcomed him with open arms but they also hold him accountable, too.”

With the transfer, Marshall knew he was going to have a reduced role. He was averaging just 4.3 points per game heading into Tuesday night’s game. He is getting used to playing without the ball in his hands as he tries to help in other ways to get the Golden Bears back to the PSAC title game.

Marshall is majoring in business administration. He is not sure what his plans are after graduation, but he said he would like to play overseas. His mother helped him get a passport for his 23rd birthday on Nov. 19.

If he decides not to pursue a professional basketball career, he has his degree to fall back on, or he is possibly interested in getting into coaching. Marshall has already started to share his story with some of his brother’s friends. He also spoke to one of his friend’s AAU teams.

“My friends always told me...‘Yo, you got a good story to tell,’ I was just thinking like, ‘Yeah, I want to share my story any time I get the chance to tell little kids or even people my age that’s going down the wrong path,’” Marshall said. “I’ve seen too many things. I’ve experienced some things and just learn from them. I just share my story with them.”