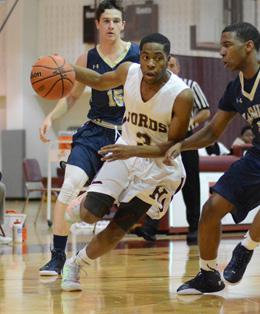 Kharon Randolph (above) committed to D-II University of the Sciences earlier this month. (Photo: Josh Verlin/CoBL)

Kharon Randolph had always been a shooting guard. Entering his sophomore year under new coach Bernie Rogers two years ago, the 5-foot-11 guard was more of a shooter and scorer than a passer. With his limited size, he had to learn to play the position effectively if he wanted to play at the next level.

Rogers taught Randolph how to play the point guard role, facilitating for teammates while still scoring at will from outside. He excelled throughout his junior season, and now the combo guard has announced his college decision.

Randolph credits Rogers for making him a smarter basketball player and a better point guard. Rogers himself, entering his third year as Haverford head coach, is the all-time assist leader at Archbishop Ryan. He also played collegiate basketball at Ursinus.

Randolph said he noticed a jump from sophomore to junior year, when he began to develop his point guard skills, adding facilitating to an already excellent outside jump shot and ability to get to the rim.

“We had to talk him through not only scoring but also making his teammates better,” Rogers said. “He’s really listened and gotten better as the years have gone on.”

The listening and improvements have paid off for Randolph, who announced his commitment to Philly’s own University of the Sciences on November 8, ahead of his final season at the Haverford School. He noted the school’s atmosphere and academic offerings among his reasons for choosing USciences.

“I felt like it was the best spot for me, especially academically, they have my major, exercise science,” Randolph said.

USciences is top 10 in the nation for average salary 10 years after graduation, according to the Department of Education. Randolph said the combination of academics and athletics is what drew him to the school. At USciences, he has the opportunity to enjoy collegiate basketball and be successful post-graduation.

“When I visited the school, I loved the campus and the people,” he said. “With their graduation rate and how everyone succeeds after graduation, that really helped my choice.”

A member of the Central Athletic Collegiate Conference (CACC), USciences last made the NCAA Tournament in 2014, behind D-II Player of the Year Garrett Kerr. Last year, the Devils went 13-15 overall (11-8 CACC), and are off to a 4-3 start this year.

USciences’ 18th-year head coach David Pauley first approached Randolph after watching him play in a showcase camp over the summer, Pauley then saw him again at team camps over the summer, before eventually offering.

Another reason USciences was appealing to Randolph was his ability to walk in as a freshman and earn play time.

With starting guard Flo Da-Silva graduating after this season, USciences will have to replace both his minutes and points. Da-Silva leads the team in minutes per game with 38.3. He also is fourth in scoring with 12.8 points per game and leads the team in assists averaging five a game. As a junior at Haverford, Randolph was second on the team in scoring, behind Christian Ray, with 16.2 points per game. Ranked seventh on the scoring list in the Inter-Ac, he was awarded first team all-league honors.

Randolph said he noticed a jump from sophomore to junior year, when he began to develop his point guard skills, adding facilitating to an already excellent outside jump shot and ability to get to the rim.

“We had to talk him through not only scoring but also making his teammates better,” Rogers said. “He’s really listened and gotten better as the years have gone on.”

While Randolph works in the weight room now to get stronger ahead of this upcoming season, he noted that he’ll need to make more improvements athletically to compete at the collegiate level. His leadership will be required this year on and off the court as the Fords look to avenge critical losses to Germantown Academy, Episcopal, and Malvern Prep down the stretch in conference play last season.

“I have to get stronger before entering college basketball,” Randolph said. “That’s really my focus before this season, and it’s going to be my focus headed into college.”

Randolph and his Fords’ teammates are on a mission. The Fords started Inter-Ac play 5-0, sweeping the first round of the double round robin. However, Haverford dropped three of its final five games, finishing one game back of co-champions Germantown and Episcopal.

“We let a couple things snowball as a young team,” Rogers said. “We let one mistake turn into two mistakes and this year we need to stick together and play through adversity.”

With the entire team returning, led by Randolph, Ray, and Jameer Nelson Jr., the Fords are favored to win the league, which Haverford has not done since 1999.

“Everything we work for is the Inter-Ac, that 10-game stretch,” Randolph said. “Going through that last year, we know what to expect, everyone is back stronger and better.”