Stark, McTamney stepping up for Ursinus 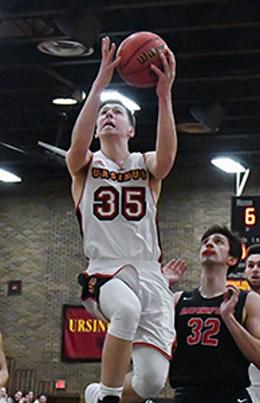 Ryan McTamney (above) and is one of two Ursinus sophomores who played high school hoops at La Salle. (Photo: David Morgan/Stylish Images)

Two hours before Ursinus was slated to host Haverford College in the season opener of the Centennial Conference on Tuesday night, Bears head coach Kevin Small decided to go for a run in the fieldhouse adjacent to the school’s gym.

When he walked in the fieldhouse, he saw sophomores Ryan McTamney and Shane Stark playing P-I-G on the open court, something the two friends do in their free time, and have been doing since their days at LaSalle College High School.

Stark and McTamney play 1-on-1 games often, whether they’re in the post or on the perimeter. They play these competitive-but-friendly games to help improve each other’s abilities, and just because they’re really good friends.

“These two are like brothers,” Small said. “In great ways, they drive each other crazy.”

The pair of teammates looked sharp on Tuesday, combining for 31 points in Ursinus’ 95-77 win over the Fords.

McTamney went 7-7 from the charity stripe, en route to 17 points. Stark finished with 14 and nine rebounds. He got off to a hot start, scoring 10 of his 14 in the first five minutes in the game.

McTamney, a 6-foot-6 wing, is the more versatile of the duo. His outside jumper still needs some improvement, but his long frame helps him glide to the rim easily when attacking from the wing.

Stark is more likely to be found in the paint, where he took all of his shots on Tuesday. Also 6-6, Stark has bulked up to 225 pounds after being 205 at this point last season. His soft touch around the rim allows him to move around opponents under the basket and finish through contact.

Stark remembers playing baseball in grade school against McTamney, but the pair first actually started their relationship each other during their freshman year at LaSalle College HS.

Neither one of them started playing meaningful minutes for the Explorers until junior year, but by senior year, they had both cracked the starting lineup and were two of LaSalle’s primary scoring threats. The Explorers fell one game short of the Catholic League final four at the Palestra.

McTamney was receiving some Patriot League interest thanks to his terrific senior year where he averaged 17 points, earning all-Catholic honors. He was still hearing from local D-III’s, but he wasn’t sure what level he would end up at. 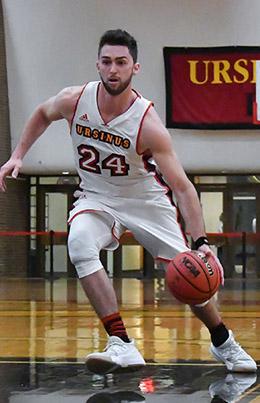 Stark had pretty much narrowed his decision down to D-III’s Scranton and Ursinus. He lives about five minutes from the Ursinus campus, and he was looking for a school with good academics, where he could also play basketball.

“We recruited both of them together,” Small said. “Both are special kids. With these guys we were pretty transparent up front that, ‘we are recruiting both of you and you will have to make decisions on if you want to play together or not.’”

After being heavily recruited by Ursinus in December of his senior year, Stark pulled the trigger and verbally committed to the Bears. He immediately started recruiting McTamney to join him, with his pitch being, “we can play four more years together.”

McTamney became being pursued more seriously towards the end of the basketball season, and noticed the opportunities Ursinus provided, and realized he didn’t want to turn down the opportunity to play with his friend.

“The number one thing was the family culture here,” McTamney said. “It was a huge part. The guys would text me every day and check in to see how I was doing. That’s what drew me in. Even the coaches were so welcoming.”

The pair were roommates during their freshman year, both noting it felt good to know another incoming freshman, on and off the court.

McTamney played in 26 games last year, averaging 4.7 points per contest. Stark, despite not seeing as many minutes as McTamney did, still averaged 5.5 points and 4.7 rebounds a game.

So far in three games this young season, the duo is off to a terrific start. Stark is scoring 12.3 points per game, and hauling in 9.3 rebounds. McTamney is averaging 15.3 points.

“It’s paid off,” Stark said. “We have both improved in our freshman and sophomore year. It’s good that we’re both starting and playing a lot of minutes. We have that chemistry we built in high school and it’s showing off out on the court.”

In practice and games both this season and last, McTamney and Stark have displayed a unique level of chemistry. The duo seemingly knows where the other will be at all points, due in part to the fact they’ve been playing together for four years prior to Ursinus.

“You play with someone for four years, you know their game,” McTamney said. “He’s in the post, I’m outside. We have that chemistry, which is good, because we can use that on the court. It’s good to know what we’re good at. We know at all times what we’re going to do.”

“They’ve got great court awareness of each other’s games,” Small added. “You only get that because you’ve played together for that long. We were recruiting two kids with high IQ, we’re spoiled rotten because these two come way better coached than most high school kids because of Joe Dempsey. They not only have come well coached, but they’ve played together for so long.”

The Bears (2-1, 1-0) dropped their season opener to Staten Island last week 85-77, at the Rinso Marquette Tournament in Annville, Pa. They bounced back in their second game, downing New Rochelle 111-85, the most points scored by an Ursinus team since the 2004 season.

If Stark and McTamney can use their developed chemistry to power this Ursinus team, they could be a force to be reckon with this season on the local D-III hoops scene.