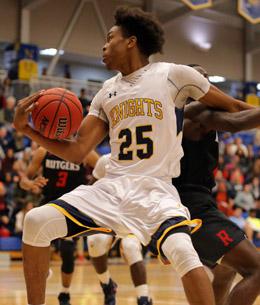 Aaron Johnson-Chavis (above) and his brother Kawaun Chavis are teammates for the first time this year at Neumann. (Photo credit: Neumann Athletics)

Michelle Chavis sat in the stands Tuesday night and couldn’t wipe the smile from her face.

Her sons, freshman forward Aaron Johnson-Chavis and senior guard Kawaun Chavis, had never played together before coming to Neumann this fall.

Tuesday night, she watched them share the court together for the third time this season. The brothers combined for 36 points in Neumann’s 84-71 win against Marywood on Tuesday night.

“You don’t understand the joy,” Michelle Chavis said. “To see both my kids play, and to start too, it’s a dream come true.”

The 6-foot-1 guard averaged 15.7 points per game last season at Johnson State, but he wanted to play somewhere closer to home in his senior season.

Johnson-Chavis, 21, spent his teenage years at prep school in North Carolina. He attended Kestrel Heights and played basketball for Bull City Prep, which is designed to help kids get recruited. The 6-foot-8 forward got a scholarship to play at Northeastern Oklahoma A&M College, but after a semester there, he was also looking for a new place to play after last basketball season.

“My brother told me he was coming here,” Johnson-Chavis said. “My mom loved that and this was a great school anyway.”

“It’s a great experience,” Chavis added. “Our family gets to come watch us play, and I love it.”

Johnson-Chavis has been a big help for the Knights in their 3-0 start, but Tuesday’s performance was his best of the season.

Rullo said some aspects of the freshman’s game remind him of Darian Barnes (Penn Wood), a 6-foot-9 forward who averaged 14.8 ppg, 10.9 rpg and 2.6 bpg last season as a senior.

“I think he’s got a tremendous upside and he’s a kid that I think is just scratching the surface of what he can do,” Rullo said. 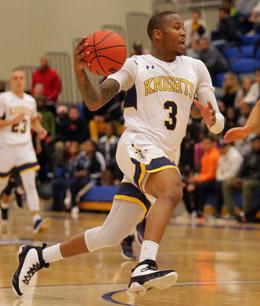 Kawaun Chavis (above) had 14 points in Neumann's win over Marywood on Tuesday to open CSAC play. (Photo courtesy Neumann Athletics)

Chavis scored a season-high 14 points in Tuesday’s win. Ten of his 14 came in nine minutes of action in the second half. He was especially effective attacking the rim as he drew nine free throw attempts, making eight of them.

The senior made a big play around the nine-minute mark when Marywood cut Neumann’s lead to three. Chavis came down the court and made a tough basket, plus the foul, to regain the Knights’ six-point advantage.

“He gives another element,” Rullo said. “Sort of like a DeShawn Lowman, that toughness from the perimeter player and I think it gives us a little more flexibility than we’ve had in the past.”

Michelle Chavis cried tears of joy to-and-from the game last Wednesday when Neumann beat Rutgers-Camden. It was the first time she had ever seen both her sons play, besides maybe a few rec games when they were little.

The Chavis brothers have a crowd of about 10 in the stands at every home game and sometimes even more. Michelle Chavis plans on getting shirts for everyone, including a “Chavis Mom” t-shirt for herself.

“I told my kids, make a name for yourselves,” Michelle Chavis said. “Y’all are the Chavis brothers.”