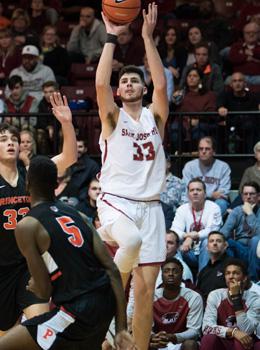 Taylor Funk (above) has scored more points through three games than all but one player in St. Joe's history. (Photo: Mark Jordan/CoBL)

When Taylor Funk arrived on Hawk Hill in the fall, Saint Joseph’s head coach Phil Martelli made one thing clear to him: he’s not a freshman, he’s a basketball player.

Martelli holds this mantra true for all freshmen that enter his program, and Funk is the poster child. As soon as he stepped on campus, Funk made Martelli happy with his choice to recruit the standout from Manheim Central (Pa.).

For Funk, those skills transferred immediately.

Through his first three games, the 6-9 forward is averaging a team-high 20.3 ppg. He’s an impressive 13-for-22 on 3-point attempts and 22-for-36 overall from the field, and his 16 rebounds are tied for second on the team.

Funk shot 5-for-6 from downtown and sunk his first four career free throws in the Hawks’ home opener against Princeton on Saturday night. He led the team with 23 points in just 24 minutes off the bench, keeping his composure the whole way through.

The Lancaster, Pa. native also knocked down a game-tying 3-pointer against Illinois-Chicago which sent the game to overtime. The Hawks won that contest, 86-82, in the extra period.

“My expectations were high, but no, I didn’t think it was going to be this nice,” Funk admitted.

“He’s so calm, like even the post-ups, the post-up baskets, he knew it," Martelli said. “It’s something to see, it’s what we see in practice though, so the players know it.”

Funk was named Atlantic 10 Rookie of the Week on Monday.

His 61 points through three games are second-most for a freshman in St. Joe’s history, behind Bernard Blunt’s 67 in 1990. Blunt averaged 18.8 ppg that season and went on to score 1,985 career points for the Hawks.

With the way his budding star has performed, Martelli was comfortable enough to make a pretty striking comparison following Saturday’s contest.

“It’s sacrilegious to say it, but in a way, it’s like Jameer [Nelson],” Martelli said. “When Jameer started, he was on a really good team and you just said okay, well he has the ball, so something is going to happen. And you knew the something wasn’t going to be bad, it was going to be good for us.”

Nelson, now a 14-year NBA veteran and former All-Star, led St. Joe’s to a perfect regular season in 2003-04, so that’s no light statement.

It does bring up the question, though, why isn’t Funk a starter yet? He’s averaging 27.7 minutes per contest, which is fourth on the team, so he might as well be.

“He’s close,” Martelli said. “He’s really a starter, it’s just that they can only announce five at a time.”

Funk is playing behind a pair of tall forwards in fellow freshman Anthony Longpré -- with whom he has developed particularly great rapport -- and redshirt sophomore Pierfrancesco Oliva. At 6-9, his official role is as a stretch-four, but because of his agility and outside shooting ability, he has played much more like a ‘2’ or ‘3’ guard -- even point forward at times.

When a player is shooting 59 percent from long range, you don’t want to force him to roam the paint. In Martelli’s offense, Funk has the green light to shoot as well as handle the ball a bit.

“Coach has me as a ‘4’ or ‘5’, but I’m a stretch-four so I can play the perimeter as well, go in and get a rebound,” Funk said. “I have the green light to take the ball up the court, start the offense, so coach has a lot of trust in us.”

“When he raises up, I think the ball is going in,” Martelli said. “Being who I am, I think at the other end, when he’s standing there looking at a guy, I think the other guy is going to get by him, and we’ve got to keep working on that.”

Defense is a legitimate concern for Funk. Because he plays so much on the outside, he gets matched up with smaller, quicker guards, and he doesn’t quite have the foot speed to stay on them.

“I have been working on my defense. We do a lot of defense in practice, working out with our trainer, just trying to get our legs stronger, so I can get a little quicker on the move,” Funk said. “They’ve got speed on me but that’s no excuse, got to guard those guys.”

It’s one of the weaknesses that comes with being a first-year collegiate player; Funk is still finding his exact place on the court and doesn’t have much experience working on his game with a college coaching staff.

Despite that fact, both he and Martelli expect him to hold a higher standard on the defensive end going forward.

“Coach always tells me and Anthony Longpré that we’re not freshmen, we’re players. So that’s no excuse,” Funk said. “If you can’t guard someone, no excuse like ‘oh, you’re a freshman.’ No, you’re not a freshman, you’re a player, you guys are very good players, so he expects a lot out of us.”

“He can be a freshman academically, he can be a freshman socially, but he’s a basketball player, and he’s in the rotation for a reason, because I expect him to be a productive player for us,” said Martelli, a coach with over three decades of experience at St. Joe’s alone.

By “productive player,” Martelli doesn’t mean that he expects Funk to make close to 60 percent of his shots the rest of the season -- that just isn’t reasonable to expect of anybody.

What he is interested in seeing, however, is how Funk will respond when the shots stop falling. Failing well can be the best show of character, and failing badly spells trouble for prospects of sustained success.

“The deal’s going to be, the day the ball doesn’t go in, will he take the next shot?” Martelli said. “Because that’s the only shot that matters. Nothing about his start means anything next Thursday in Anaheim. Nothing. Nothing about his three games. It’s that game and that shot and he’s got to be in that moment.”

There’s no doubt Funk will be a crucial part of the Hawks’ scoring gameplan for the rest of the season. St. Joe’s has on-ball minutes available after captain Lamarr Kimble was ruled out for the season, and Funk is in prime position to take advantage of that opportunity.

He’ll soon be playing alongside Charlie Brown, who set the Hawks’ rookie 3-point record and averaged 12.8 ppg last season, once Brown returns from a wrist injury, which could be as soon as Thursday’s game against Washington State in the Wooden Legacy tournament in Anaheim, Cal.

With yet another scorer in the mix, St. Joe’s has the potential to put up a lot of points.

“(When) we add another scorer with Charlie Brown, it’s going to be really interesting to see balls go in the basket,” Martelli said. “I like that, I like balls going in the basket. More than anything else in basketball, that’s what I like.”

So far, that’s something Funk has proven to be very good at.