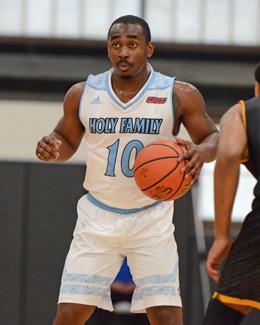 Holy Family's Mekhi Bryant (above) came right into the Tigers program and became one of its leaders. (Photo: Josh Verlin/CoBL)

In seven years as Holy Family’s head coach, R.C. Kehoe had never had a player tell him to be quiet.

Until Mekhi Bryant came along.

The junior guard arrived at the Northeast Philadelphia school this summer, after spending his first two collegiate years at Baltimore City (Md.) junior college. A 2015 graduate of Pennsbury High School, Bryant had been a four-year player for the Falcons who was always known for his maturity and presence on the court.

“I consider myself a natural leader,” Bryant told CoBL. “So it’s not trying to be a leader, it’s that I am a leader. So therefore, I don’t try to be dominant, I don’t do anything, I just talk.”

And so, while still in preseason workouts with his new program, Bryant tried to interrupt Kehoe when the coach had some choice words for some other players about their effort and toughness. Bryant said he could handle it.

Kehoe, possessing -- like his uncle Phil Martelli -- a strong personality, wasn’t ready for that.

To Bryant’s credit, Kehoe added, the guard didn’t exactly heed his coaches’ words, though he certainly started picking and choosing his spots to say something much more carefully. It took two or three more times of Bryant telling his coach to let him handle an issue before Kehoe relented.

“He says it in the most respectful way,” Kehoe said. “The other day in practice, I was ready to get into somebody, and Mekhi kind of grabbed me by my hip and said ‘coach, not right now, we’re good.’ And he was right. And I’ve never had that before.”

There’s a reason Mekhi Bryant was brought up onto the Pennsbury varsity team as a freshman, the only member of his class to do so, including future Division I guard Cameron Jones (Saint Peter’s).

A 5-foot-10, 195-pound guard -- he wasn’t much shorter as a freshman, though a few pounds lighter -- Bryant was a pass-first point guard and strong defender who could also knock down an open shot, though he was far from a gunner.

“He was always more physical, always a little more mature, and it translated into what you see now,” Pennsbury coach Bill Coleman said. “When you listen to what people are preaching, it makes you more prepared than others. And Mekhi’s always listened and always bought into what we were telling him at an early age.”

“I always took that from my father [Calvin Bryant] -- If I talk, I’ll be okay,” Bryant said. “He was like, ‘look you’re a small kid; if you talk, you’re going to play every single minute.’ And I wanted to play, so I kept talking, even at practice -- talk, talk talk, so now it’s second nature.”

Coming out of high school, Bryant had to go the junior college route to get qualified, so he went to Baltimore City to play under head coach Terry Maczko. He started all 31 games he played in as a sophomore, averaging 9.0 ppg, 3.5 apg and 3.2 rpg on a 20-12 team.

As the season wound down and he began to think about where he wanted to spend the last two years of his college career, Bryant knew he wanted to be closer to home. Several southern D-II schools had expressed interest, but it wasn’t mutual.

“I know me going down to Baltimore, I wasn’t stressed, but I was looking for my mom and dad out there in the crowd,” he said. “I knew if I came back here it would be easier, I would play better.”

Holy Family and Kehoe presented an obvious destination; they’d been the first program to offer Bryant, doing so when he was still a junior at Pennsbury, and had gotten back in touch during his sophomore year at Baltimore City. Mansfield also got involved in Bryant’s recruitment, but the appeal of playing just about 30 minutes from home was too great.

“They already knew how I played out of high school, we already had a relationship,” Bryant said of Kehoe and his staff. “So it was either go to a school I had a relationship with (and) know the coaches very well, or just come out, try to find a new coach, a new relationship.”

At Holy Family, Bryant joins a program that’s just two seasons removed from hosting a regional round of the D-II NCAA Tournament, though the entire rotation graduated immediately afterwards. Last year, the Tigers went 11-17, relying on a mixture of freshmen and junior college imports, but the chemistry was never right.

Kehoe and his staff kept some pieces from last year but yet again brought in a number of junior college transfers, as well as some freshmen that are sure to see minutes, as he tries to rebuild the program back to where it was.

Getting someone with Bryant’s leadership qualities was a crucial factor.

Holy Family lost its first two games to open the season, with Bryant starting and averaging 11.5 ppg over the pair. In giving up 71 points to American International and then 85 to Merrimack, both Kehoe and Bryant talked about needing to work on perfecting the 2-3 zone defense Holy Family has become known for under Kehoe, like a local D-II version of Syracuse.

Allowing opponents to shoot 38 percent from 3-point range won’t cut it. Bryant knows it’s at least partially on himself to make sure his teammates know their positioning, know their sides, even if he’s still learning the defense himself.

If Bryant can get the Tigers’ defense clicking the way Kehoe wants it, he won’t often have to be told to shut up by his coach anymore.

“The better he plays,” Kehoe said, “the more likely I am to listen.”