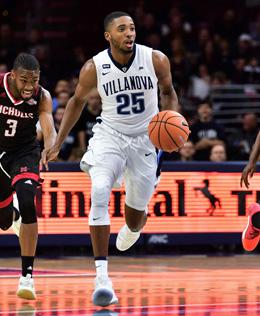 Mikal Bridges (above, #25) led Villanova with a career-high 23 points in the Wildcats' 113-77 win over Nicholls St. on Tuesday night.

Coming into the season, the one piece of criticism Mikal Bridges kept getting from scouts was that he needed to score more.

Already recognized as one of the better pro prospects in the nation, the 6-7, 200-pound Bridges is projected to fall somewhere in the first round of the 2018 NBA Draft.

Exactly where he’ll fall on draft boards — probably anywhere from top 10 to end of the first round, according to mock draft experts — will in large part be decided by his offensive performance for Villanova this season.

“What’s really unique about him [is that] he’s driven to be the best he can be and he really believes the best way to do that is be a great teammate, which is rare,” Villanova head coach Jay Wright said.

After stepping in for Phil Booth to start the Wildcats’ final 33 games, Bridges shared Big East Defensive Player of the Year honors with teammate Josh Hart and Creighton’s Khyri Thomas.

The Great Valley (Pa.) product averaged 9.8 ppg, 4.6 rpg, and 2.0 apg, and although he shot well – 54.9 percent from the floor and 39.3 percent from three – he didn’t shoot enough or create enough of his own shots to generate big-time draft buzz just yet.

Bridges’ performance in the postseason left much to be desired after scoring a combined 10 points in three conference tournament games and being held scoreless in the Wildcats’ Round of 32 loss to Wisconsin.

He had no such problems against Nicholls St. on Tuesday night, leading Villanova with a career-high 23 points in a comfortable 113-77 victory.

His previous best was 20 points, which came in a loss to Marquette last season.

“It’s something I don’t think about,” Bridges said. “I just go out there and try to play as hard as I can and I just try to defend, that’s what I’ve been doing since I got here, just trying to defend and rebound…like coach says, if you defend and rebound, good things will happen to you.”

Bridges scored his first points just four seconds into the game and shot 7-for-11 from the field and 4-for-7 from three-point range. He scored 17 of his 23 in the first half, during which he missed just a single shot and didn’t turn the ball over.

He rounded out a stuffed stat sheet with six rebounds, four assists, five steals, and a whopping four blocks – all of which came in the first half.

“He doesn’t need to be the star and he can do everything,” Wright said. “On nights that he’s not scoring, he’ll do everything else and be happy.”

“With every one of our players, we try to develop each guy into being complete, being able to do everything,” Wright added. “So with a guy like that, when you’ve got that body type, you’re 6-7, long, athletic like that, and then you can do everything, that’s a pro. It’s really just him developing like all our guys and then bringing his natural gifts to the table.”

A slew of other Wildcats got in on the block party, as the team set a school record with 13 blocked shots on the night. Omari Spellman registered four and Eric Paschall had two, while three other players pitched in one apiece.

There was one sequence around the nine-minute mark in the first half when Bridges blocked the shot of a Nicholls State’s Roddy Peters, blocked him again after an offensive rebound, and then Spellman blocked Tevon Saddler on another putback attempt, sending the 8,517-person crowd into pandemonium.

“We were playing good defense and we didn’t let up,” Bridges said. “They got the offensive rebounds, I stopped and Omari got the other block, so it was a lot of good energy and we were all fired up off of that.”

On the offensive end, Villanova (2-0) had six players in double figures. Donte DiVincenzo had 20, Jalen Brunson had 17, Phil Booth had 12, Paschall had 11, and freshman Collin Gillespie had 10. Spellman added nine points and six rebounds.

It was a much better shooting night than the Wildcats put up in their season opener against Columbia, a game in which they converted just 40.3 percent of their field goal attempts and were 7-32 from deep. Against Nicholls State, those numbers jumped to 57.5 percent from the field and 13-30 from three-point range.

The increase in efficiency was simply a matter of players passing up good shots to create better ones.

“There were guys that had good shots and it started early in the game,” Wright said. “Eric Paschall had a good one, he passed it to Collin who had a better one and he passed it to Mikal who had a shot in the corner.”

Tonight, Bridges was the beneficiary of the final passes. But in games going forward, Wright hopes, any of a number of players could end up leading the team in scoring.

“I hope through experience here that one night it’s going to be Mikal…tonight it was Mikal and Donte, the other night it was Eric and Jalen,” he said. “I hope that’s our advantage during the season.”