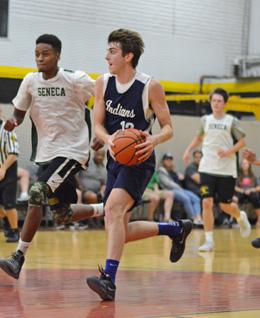 Brady Haggerty (above) and Council Rock North have to replace eight seniors from a year ago. (Photo: Josh Verlin/CoBL)

Council Rock North was playing at its best at the end of its regular season last year.

The senior-led Indians had won six of their last seven games, including big wins over Suburban One opponents Pennsbury and Neshaminy.

When the PIAA District One 6A rankings came out at the conclusion of the regular season, it was revealed that the Indians and first year head coach Jesse Krasna were seeded 25th in the district. They had missed the district tournament by one spot.

“We had eight seniors and they were really playing well towards the end of the season,” Krasna said. “They thought they could make some noise if we got in, but the younger guys coming up saw how close we were and we had so many one or two point games throughout the season. They got a taste of how close we were.”

Senior guard Matt McAlister, a three-year starter, is the only returning player with varsity experience. The rest of the roster will consist of mainly last year’s JV team, who confident with their ability to mold with their teammates on the varsity level.

“I think it’s extremely important because we know each other’s strengths and weaknesses,” said Brady Haggerty, a 6-3 senior who’s projected to crack the starting lineup after playing at the JV level last year. “We try to feed off of each other and try to pick each other up at the end of games. When games are close, we know how to keep each other up.”

Haggerty and the rest of last year’s JV team were coached by Rick Baxter, someone extremely influential to the Indians program, according to Krasna.

“He’s tremendous,” Krasna said. “He’s gotten those guys ready for varsity basketball. I know when those guys come up they’re going to be disciplined and work and play the right way. It’s nice from a coaching standpoint to have a guy like him.”

Last year McAlister was the main 3-point threat for the Indians, so you'd mainly find the 6-2 sharpshooter out on the wing. Ehlin, last year’s main offensive source, has since graduated, so look for McAlister to take on a bigger role in this year’s offense, attacking off of the dribble and orchestrating the way the Indians play.

Haggerty will play more of an inside role, considering that at 6-3, he's the team's tallest player. While he's more of a more unconventional scorer, Haggerty will annoy opposing players with his pestering defense and non stop motor. He's got a great touch around the rim, and he can stretch the floor to make the open jumper.

“I try to work hard, be the hardest worker on the team,” Haggerty said of his game. “I try to push everybody and let my defense fuel my offense. I try to be a great defensive player and attack the glass on every play.”

Angad Ahluwalia, a 6-2 senior forward, is a physical combo forward who will bring toughness to this Council Rock North team. The second guard spot will likely be filled by junior D.J Mischak. According to Krasna, Mischak has grown three or four inches over the past year, and is now up to about 6-1. 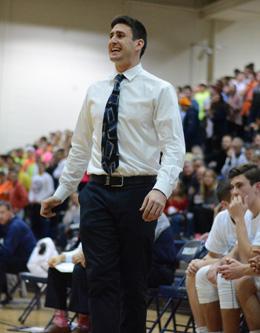 Krasna (above), who played at Pennsbury and Ursinus, is in his second year at CR North. (Photo: Josh Verlin/CoBL)

“I think the exciting part is that I’m getting to know the kids a lot better,” Krasna said. “I felt that everything was very rushed last year. We were putting in our system while getting to know the players, and while knowing I only had a year with them. I’m excited to have some chemistry between the coaches and players.”

Before accepting the CR North coaching job, Krasna played at nearby Pennsbury, where he was part of a Falcons program that won 60 consecutive league games, three straight league titles, and four consecutive state tournament appearances. He then went to Ursinus, where he scored 1,007 points and earned all-Centennial Conference honors as a junior and senior.

When Derek Wright left CR North for the head coaching position at rival CR South in 2015, the then 25-year-old Krasna jumped on the opportunity to lead a program he was already somewhat familiar with.

“I grew up like 10-15 [minutes] from CR North,” Krasna said. “So I know most of the families that are there. It’s pretty neat to be local and to be able to help kids in the area.”

Since the Indians will be young and inexperienced, CR North has been participating in as many leagues and tournaments it possibly could in the offseason.

“We started open gyms in april, played the spring league at William Tennett, summer league in Jersey and we’re in a fall league right now too over at Competitive Edge,” Krasna said. “Last year at this time we hadn't played nearly as many games. We thought it was pretty important that they get some on court experience to help them get ready for the varsity speed, and the physicality too.”

In addition to the rigorous Suburban One National Conference schedule, the Indians will play host to Perkiomen Valley and Haverford High. They’ll also visit Penn Wood, and participate in the Unionville Christmas tournament.

With a group that has been working on getting ready for the varsity level with last year’s end result in mind, the Indians hope they can make this year’s district tournament, and hopefully make some noise once they are there.

“I think our league is very strong again,” Krasna said. “If we play the right way, if we bring a lot of toughness, I think as long as we continue to improve, we’ll be happy with where we are at the end of the season.”