The D-III schedule gets underway on Wednesday evening, with just about every one of the several dozen area programs playing the first night possible, and everybody else joining in within the next couple of days.

Last year was another terrific one for the region’s small-college teams. Swarthmore, Cabrini, Neumann and Susquehanna all went dancing; Swat won its first tournament game in its first-ever appearance, and Susquehanna advanced to the Sweet 16. Some of those teams return almost entirely intact for this season; others will need to replace key pieces to sustain their levels of success from a year ago. 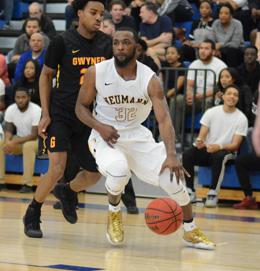 With DeShawn Lowman (above) among a terrific senior class now graduated, Neumann has some retooling to do. (Photo: Josh Verlin/CoBL)

Update: Neumann was dominant last season, setting a program record for wins. The Knights were the top D-III team in the country when it came to scoring margin, earning the top seed in the CSAC Playoffs and later taking the conference title. Things will be different without Lowman, Barnes, and Wallace, that’s for sure, but Hudson and Cassidy are there to carry the torch. A pair of key local products join the Knights as well: former Martin Luther King standout Raquan Brown-Johnson and Lower Merion grad Jaquan Johnson. Those two should have an instant impact for a team that, although it might not replicate the same success as last season, will be a top finisher in the CSAC.

Update: After going 22 years without an NCAA Tournament berth, the River Hawks are coming off back-to-back dances, having made it for the third and fourth time in Marcinek’s record-setting tenure. Making it three in a row will be no easy task, as Susquehanna has to replace the scoring power of Weidlich, who hit 44.6 percent of his shots overall and 38.6 percent from 3-point range, finishing the season as the only 20-plus ppg scorer in the Landmark. They do retain one of the league’s best big men in the 6-7, 230-pound Traub, a senior and the league’s fourth-leading scorer/sixth-leading rebounder a year ago. Hoagland and sophomore Seth Callahan (5.2 ppg) are sure to see a lot more shots come their way, while sophomores Jacob Walsh (6-8) and Zach Knecht (6-7) bring more size up front. With five freshmen and seven sophomores on the roster, this team could take some learning lumps early on.

Update: The Pride certainly closed out 2016-17 strong, winning nine of their final 10 games -- all but one in league play -- before a home loss to Albright in the Commonwealth playoffs’ opening round. Three of their four double-digit scorers have moved on, but their top producer is back, and that’s enough to make them very dangerous. Sambo is perhaps the most versatile player in the area; a 6-4 wing guard, he not only was his team’s leading scorer and rebounder last year but also by far its leading shot-blocker, with 73 rejections (2.8/game). As long as he’s healthy, the Pride will be a problem, and they’ve got pieces to go around him. The roster’s only two sophomores, 6-5 wing Connor Laverty and 6-3 Elijah Boyd, both played about 14 mpg off the bench as freshmen, and 6-5 junior forward Nick Jackson is back after starting 13 games last year. This is a team with a good all-around size -- eight players stand 6-4 or taller, even though nobody’s taller than 6-6.

Update: There’s a few new faces in the Centennial -- Pat Doherty at Haverford, Josh Loeffler at Hopkins, Kevin Hopkins at Muhlenberg -- but Robinson continues to chug on at Franklin & Marshall, where he’s the D-III all-time wins leader with 930 victories under his belt. They’ve made 24 NCAA Tournaments in his tenure, though missed out last season after losing to Dickinson in the league semifinals. Federici, a 6-3 wing, has had an impressive career scoring the basketball, with 1,512 points heading into his senior year (18.9/game), but the main thing missing from his resume is any real postseason success; the Diplomats have made just one NCAA Tournament in his three years there, losing in the first round in 2016. Federici and Tate are two of four seniors on the roster, but there’s more freshmen (nine) then there are sophomores, juniors and seniors combined (seven). Last year, eight players started 10-plus games; five of them have returned.

6. Moravian Greyhounds (19-9, 11-3 Landmark)
Head Coach: Justin Potts, 3rd season
Key Losses: Brandon McGuire (17.9 ppg, 10.1 rpg), Sean Hanna (10.2 ppg)
Key Returners: Jimmy Murray (13.2 ppg), Oniel Holder (10.8 ppg, 5.0 rpg)
Update: Since Potts took the helm, the Greyhounds have really been on the rise. They made it over the .500 mark last season for the first time since 2012, and won their first postseason game in 27 years. But graduation has claimed three starting players -- McGuire, Hanna, and Isaiah Jennings -- so Moravian has a lot of minutes to replace. Juniors Murray and Holder, the two remaining starters, will shoulder a heavy load, as will sophomore guard C.J. Barnes, who looks set for an increased role after scoring 7.1 points per game last season. With most of last year’s bench returning, this will be a deep, seasoned team, and under Potts, the Greyhounds’ eyes will be on a return to the conference title game. 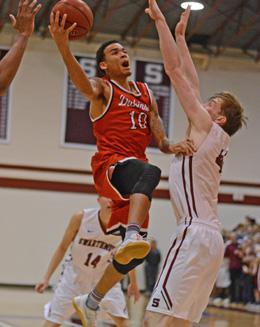 Elijah Wright (above) is one of several talented wings on the Dickinson roster. (Photo: Josh Verlin/CoBL)

Update: Last season was a scramble for the Red Devils, who were 9-9 on Jan. 26 and had to win six of their final seven games just to get into the Centennial playoffs, where they upset Franklin & Marshall before falling to host Swarthmore 68-64 in the championship. And that was without a senior in the top 12 minute-earners. Now, with most of the rotation back -- Brown, a 6-6 junior now at NYU, was the most notable of a few transfers -- the Red Devils are trying to play the whole season as strong as they were the last three weeks of last year. Seretti has truly adapted the idea of positionless basketball -- everybody on his roster is listed as a “G/F”, from the 6-2 Wright to the 6-5 Romocki and 6-7 Melton. Look for 5-9 sophomore Bryce Allen, a G/F who looks an awful lot like a point guard, to take a step up after averaging 8.6 ppg as a freshman.

Update: Lebanon Valley has something else no team in the area can boast: not just one, but two bona-fide All-American candidates. Light, a 6-0 guard, and Orr, a 6-7 forward -- both seniors -- present the toughest 1-2 punch in the area to defend, and there isn’t a close second. Orr, a four-year starter, was the MAC Commonwealth Player of the Year as a sophomore, and was a second team all-region selection by the NABC and D3Hoops.com; Light, a three-year starter and Millersville transfer, was a first team all-MAC Commonwealth selection last year and the league’s leading scorer. The key for the Dutchmen will be developing a reliable third and fourth option, as no other returner averaged more than Boccanfuso’s 5.7 ppg. So far, Light and Orr haven’t been able to turn their talents into significant on-court success, winning 16 games in each of their two seasons together, and this is their final chance.

Update: York finished last season just on the outside of our top 10, but with a lot returning from a 17-win squad, they’re starting this year in the top three. Last year was the best so far of Hunter’s tenure; after missing three consecutive Capital Athletic Conference playoffs following a first-round exit his first season, the Spartans beat Wesley before losing to Salisbury in the semifinals. They’re led this year by Scamuffo, a senior guard out of Central Bucks South and their leading scorer from a year ago. Myers (6-7) and Reich (6-5) give them a pair of seniors in the frontcourt as well. Add in junior Jason Bady (9.2 ppg) and sophomore Jared Wagner (8.1 ppg) and they have all five of their top scorers back from a year ago. The Spartans are certainly in the hunt for their first league championship since 2012. 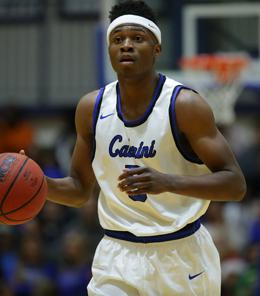 Tyheim Monroe (above) is back for one final go-around at Cabrini. (Photo: Mark Jordan/CoBL)

Update: Cabrini has the area’s singularly most dominant Division III force, a spot the Cavaliers have been in before in the days of Aaron Walton-Moss. But Monroe is his own tour-de-force on the court, as the 6-7 wing forward has grown into a true two-way force, and was a fourth team All-American mention by D3Hoops.com as well as CoBL’s all-area player of the year. He was the nation’s rebounding leader while also leading his league in scoring -- oh, and he shot 51 percent overall and 44 percent (23-of-52) from 3-point range. They did suffer an unexpected blow this offseason as junior wing DeVahnte Mosley (13.8 ppg, 4.4 rpg) will have to undergo ACL surgery and will miss the season; they also will be without guards Brett Foster and Anthony Wright-Downing for the fall semester. So they could be a little uneven out of the gate, but Monroe will make sure they’re competitive no matter who else is on the court.

Update: Swarthmore basketball is not only relevant, it’s thriving. Kosmalski, who played college ball at Davidson and was an assistant there before coming to coach the Garnet, has the program at the highest level it’s ever been, coming off a school-record 23-6 finish and the team’s first-ever league title, as well as its first-ever NCAA tournament victory. The 6-0 Wiley, a difference-maker at the guard spot who became Swarthmore’s first-ever All-American last season, makes everything go for the Garnet, able to create his own shot and find open looks for teammates. Walsh, 6-8, should provide good size inside, and Yonda will be an important piece as the senior leader. Without Wiley, this was a very good team, and with him, it’s the best in the region.