Temple and Jefferson faced off for the first time since 1976 -- when the Rams were still known as Philadelphia Textile -- on Thursday night, marking the final game of the Owls’ preseason.

Though the Rams entered the Liacouras Center already 2-1 on the season, Temple walked away with a comfortable 70-60 win over their Division II opponent in the exhibition contest.

Here are our thoughts on the game: 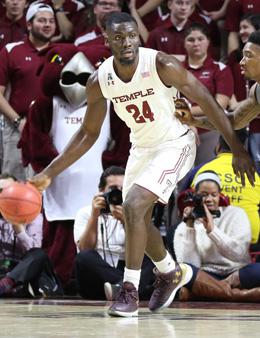 Ernest Aflakpui (above) looks like he'll be starting at center for Temple to open the season. (Photo: Tommy Smith/CoBL)

1. Aflakpui gets the starting nod up front

Last season, Temple didn’t really have a defined starting center. Ernest Aflakpui started 21 games, Damion Moore started seven, and 6-10 combo forward Obi Enechionyia even played the five in a few games. With all three players returning for the upcoming season, we could see a repeat at the five, but head coach Fran Dunphy previously noted that he hopes either Aflakpui or Moore will emerge as a surefire option.

Dunphy gave an indication of who he’s leaning toward at this point, starting the 6-10 Aflakpui against the Rams. The Ghana native and Archbishop Carroll product, who averaged 4.3 ppg and 5.0 rpg last season, was the more effective of the two on Thursday night, showing good hustle in 20 minutes on the court. Aflakpui finished the game with three points, six rebounds (including four offensive boards and other loose balls tipped out to teammates), and two steals, also drawing a pair of his signature charges, for which he’s highly-touted by Dunphy.

“Ern did a really good job offensive rebounding the ball. I’d like him to do a little bit better defensively, I thought there were times where he could have helped,” Dunphy said. “We gave up dribble penetration a number of times today and really the bigs had the responsibility of keeping guards in front of them coming off a ball screen, and we just didn’t do a great job of that.

Moore, meanwhile, spent 14 minutes in the game for the Owls, making just one of six field goal attempts to record a stat line of three points and three rebounds. The 6-11 sophomore put up 3.7 ppg and 2.9 rpg in 20 appearances last season.

“I’m still messing with it,” Dunphy said. “I think they’re both going to get minutes…they’re probably going to do a little bit better in terms of minutes played throughout the rest of the season but I don’t think anybody’s separated themselves from the other at this point.”

It’s clear that Temple needs those two to man the five this season so Enechionyia can play his more natural position as a stretch-four. Enechionyia looked good in that role facing Jefferson, ending Thursday’s contest with 12 points and six rebounds on 5-10 shooting from the field, though he was the Owls’ biggest player on the floor at times.

“Obi played some five spot. I don’t know what a five spot is. We don’t have a center necessarily, I think Ern and Damion are forwards, and Obi is certainly a forward, but he was out there as our biggest guy,” Dunphy said.

When Dunphy had to go to his bench last year, there was a clear drop-off in production, not to mention a clear lack of depth.

The Owls’ bench for the majority of last season consisted of freshmen Damion Moore and Quinton Rose, plus seniors Mark Williams and Mike Robbins. In sum, that was one senior (Williams) with career 4.4 ppg and 2.8 rpg averages, another (Robbins) who was a former walk-on with all of 18 minutes of varsity experience heading into 2016-17, and two freshmen with zero D-I experience.

Not surprisingly, Dunphy ended up leaning on his starters for massive minutes; Shizz Alston Jr. averaged 36.4 mpg, Daniel Dingle played 35.6 mpg and Obi Enechionyia played 32.8 mpg; all three started all 32 games. Dingle is gone, and redshirt senior Josh Brown has returned from an Achilles injury, but none should need to play those kinds of minutes on a regular basis.

Thanks to a strong four-man incoming class and the maturation of last year’s freshmen, Dunphy has a much stronger reserve unit to turn to this season. Alani Moore played 21 minutes off the bench in the win, scoring 13 points with four boards, four assists and three steals. Damion Moore, as mentioned above, grabbed five rebounds and scored three points in 14 minutes. Freshman DeVondre ‘Dre’ Perry had six points and six boards in 17 minutes; his classmates Nate Pierre-Louis and J.P. Moorman combined for 19 minutes, though Pierre-Louis had the pair’s only two points.

As a group, the bench contributed 24 points and 18 rebounds in 71 minutes, shooting a collective 8-for-23 overall.

Whether or not Temple stays that deep throughout the regular season remains to be seen.

“I’d love to play 10 guys, we’ll see how each game figures itself out,” Dunphy said. “I think we can. I don’t know how many minutes everybody will get.” 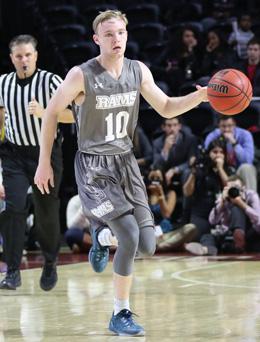 Jefferson freshman Alex Gorton (above) has had a strong start to his college career. (Photo: Tommy Smith/CoBL)

Through the first three games of the Rams’ regular season, their leading scorer has been true freshman Alex Gorton. And even against Temple’s high-level backcourt on Thursday night, it was easy to see why.

A 6-2 guard, Gorton scored 13 points to tie for the Rams' team lead, doing so on a nifty 5-of-8 shooting, including knocking down both of his 3-point attempts while grabbing six rebounds. He did commit four turnovers, but played all 40 minutes against a talented, experienced and deep Temple backcourt.

In Jefferson's first three games of the season, he's averaging 16 points per game while hitting an even 50 percent (9-of-18) of his 3-point attempts.

“I think he’s a great addition to the team, another great shooter, a person who just attacks the basket, very aggressive towards the defense, draws people in,” senior guard Kaison Randolph said. “When he drives and kicks, he helps everybody on the team, makes the team better.”

Gorton came to Philadelphia by way of Valley View HS and The Skill Factory prep school, which he attended for one season as a post-grad year.

With projected lead guard Jordan DeCicco opting to pursue his business career, Gorton had to be thrust into a starting role, and won't often see the bench this season -- and perhaps for the rest of his college career.

“I thought he was a terrific player in prep school, scored over 1,000 points in prep school in one year,” Magee said. “He can really play. But to put him in this and expose him to 40 minutes per game, that’s tough for anybody. But he’s going to have to do it."

5. Odds and Ends
-- Temple’s Quinton Rose spent the second half on the bench. Fran Dunphy said after the game that it was just precautionary, that Rose was only cramped. The sophomore wing led all scorers at halftime with 13 points in 17 minutes on 6-11 shooting. Also had 3 rebounds, an assist, a block, and a steal. In his place, fellow sophomore Alani Moore II started the second half. Moore finished the game with 13 points, four rebounds, and four assists in 21 minutes.

-- The Owls’ overall shooting certainly left something to be desired. Despite playing against a Jefferson squad they owned a multi-inch height advantage against at every position on the court, Temple shot just 27-of-72 (.375) from the floor and 8-of-26 (.308) from 3-point range. Shizz Alston has a particularly tough night, as he went 3-16 from the field. Dunphy noted that the statistics might be misleading because the Owls “didn’t do much the last eight minutes.”

-- Jefferson forwards Yevgen Sakhniuk and Josh Bradanese showed some promise in the post, but they entered foul trouble in the second half. Sakhniuk, a grad transfer from La Salle, scored 12 on 6-for-11 shooting, but turned the ball over six times; Bradanese had a similar night, racking up 13 points and four giveaways. The two combined for eight rebounds, outsized by the Owls’ bigs.

-- Jefferson coach Herb Magee on the team’s 2-1 start out in California: “That helped us...those teams out there are very good teams. We’re going to be outsized the whole year. Kaison’s playing small forward, our other power forward is like 6-5, and Yevgen’s only 6-6, 6-7. That was good for us tonight and good for us out there, too. We were fortunate to win two, we ran out of steam in the third game in California, because as you can tell, we don’t sub a whole lot.”