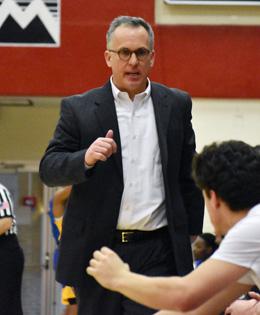 Pat Zipfel (above) left the NBA ranks for the head coaching job at Mansfield in 2015. (Photo courtesy Mansfield Athletics)

When he took over as head coach at Mansfield in October 2015, Pat Zipfel had no idea what to expect. After 15 years as an NBA assistant, he was returning to the college ranks.

Thrown into the fire without much time to prepare, Zipfel’s team went 6-21 (4-18 PSAC) in 2015-16. With another season to adjust and the ability to bring in his first recruiting class, Zipfel helped guide the Mountaineers to an 11-15 season last year, which included an 8-14 conference record.

CoBL recently spoke to Zipfel about his team’s local ties and his progress in turning around the program in Year Three. Here is the (copy-edited) transcript of our conversation:

City of Basketball Love: What has made you so successful recruiting in the Philadelphia area and why has that been an area you’ve tried to tap into to find some talent?

Pat Zipfel: Our campus is about three and a half to four hours outside of the city. There’s tremendous basketball talent in Philadelphia. Historically, currently and I’m sure in the future. I’m aware of it because of my days at Cabrini. Many of my teammates were from that area, quite a few of them coach, quite a few of them have reached out to me at one time or another to talk about their sons or friends, so I have some roots in that area and have had success just because of that and because it’s such a strong basketball city. It really is. Where Mansfield’s located, is like remote. The closest city to us is Williamsport. And there is talent in Williamsport, but there’s so much talent in Philadelphia that I really and truly have tried to make it a focus to get to that side of the state.

CoBL: What were things like for you in Year Two last year. Anything a little bit easier, or were you still trying to learn how to coach at this level?

PF: The first season, I took the job in October and had no recruiting class, so it was the cards that I was dealt. I didn’t know any of our players, took it late, did the best we could. Last year, I was able to have one recruiting class and in that recruiting class I obviously had a number of players from Philadelphia. We’ve had success. We doubled our wins. We beat a Division I. We, and I say this sincerely, we academically were the lowest in the PSAC, and we have since risen up now where we’ve gone up four or five spots academically. We’ve graduated everybody so far…The culture that I’m trying to build has had a total overhaul. I really call last year my first year because it was my first recruiting class. Now, this to me is my second year, so I finally have a roster that is my roster. Anyone who’s with us is because I want them to be here.

It’s been interesting. I spent 14 years in the NBA and I had no idea how good the PSAC conference is. The PSAC conference is legitimately a phenomenal basketball conference and people underestimate it. I underestimated how good this conference is. And that’s every school. From IUP, which is a top-five team in America in Division II, to Shippensburg, which is a top-five, maybe six in the country. There’s so much talent in this conference it’s incredible. Overall, it’s a culture change. I’m trying to change the entire culture and build a family, a basketball family, for lack of a better word, at Mansfield and get the program up to where we are competitive and teams are worried about us. I’m not sure we’re there yet where every night they’re worried about us, but we’re trying.

CoBL: You bring back your top four leading scorers, how important is that to have something to build on in your third year?

PF: We’re lucky. We bring back two of the top ten scorers in the conference in Malik Carter, who grew up in Philadelphia, and Matt Tamanosky, who was a Harrisburg kid but played in the Mid-Penn conference, which isn’t that far away. We bring back four scorers. We’re pretty excited. We have Jeremiah Worthem who had sat out. He was one of the all-time scorers at Math, Civics and Sciences. He was a D-I player who sat out for us last year, again a Philadelphia kid. We’re in a good spot. We’re senior heavy, but you don’t flip a switch and win in the PSAC. It’s a process. This process has taken the two years that I discussed. We’re in a good place. I hope we can stay healthy. We can just compete every night. I never in my wildest dreams knew how good this conference is, and it’s night in and night out. Even people in the Philadelphia area, you’re so swamped with Villanova and La Salle and Drexel and Penn and Saint Joe’s that I think people don’t really realize how good that conference is. And you have West Chester right there and Kutztown not too far, Cheyney right there. That’s a good, good conference.

CoBL: You mentioned Jeremiah Worthem, are there any other under-the-radar guys you see maybe taking a step forward this year?

PF: Well, our point guard is from Philadelphia as well, Cedrick Powell. He went to Strawberry Mansion. He left Strawberry Mansion and went to a junior college in Florida. Cedrick’s a senior. He’s on target to graduate in May. He played the second most minutes in the conference last year. He’s a really important piece. He’s the engine that drives us. He’s not a score-first guard. He’s a pass-first guard…Our point guard’s from Strawberry Mansion, a Philly kid. Our shooting guard, Malik Carter, grew up in Philadelphia but ended up going to high school in Florida. Jeremiah Worthem is from Math, Civics and Sciences. We have a freshman that was just recruited out of Mastery Charter, Eli Alvin. So our focus is our seniors, but we have a heavy Philly roster. And again, to change the culture in a short amount of time and try to be competitive in this conference has been a Herculean effort. It’s taken everything out of myself and our coaching staff to try to find talent. We have our 6-10 kid who just came in this year, he’s from outside Philly. Dan Ransom.

CoBL: Ransom from Pennsbury, how’s he looked so far? You don’t get too many 6-10 kids

PF: You can’t teach height. We needed somebody big and who could rebound and run, and that’s what he’s done. He’s still learning. He’s got a lot to learn about this level and the conference, and figuring it out, but he’s been a pleasant surprise. He’ll give us a lot of minutes throughout the year. He’s a big guy who can rebound and his vertical leap is exceptional. He can run the floor.

CoBL: Your assistant Da’Quan Jones is a Philly guy. He played last year and you kept him on staff...

PF: That’s exactly right. And I circle back to the word family. I’m trying to build a family, a culture. In every huddle, we say the word family. Instead of saying together, or win, or defense, we say the word family. So when we had a job opening, it only made sense as part of our culture to hire one of our own. Da’Quan played for us last year. He’s a quality young man from Philadelphia. Has a bright future as a coach. So when the job opened, even though we had tons of applicants, we really didn’t have to look far because we had someone from our family who was interested and that’s the choice we made. Other coaches in our conference have been around a long time...It doesn’t happen quickly because the conference is so good. We’ve tried to surround ourselves with good people, find great basketball talent who are also good in the classroom. Da’Quan as example graduated and is a member of our basketball family. Overall, we’re in a great, great spot and should have a very, very competitive year. The conference itself is so rugged. I know a lot of schools wouldn’t want to play a PSAC school. That’s for sure.

CoBL: You beat Duquesne at the beginning of last year in an exhibition. How cool was that to compete with a Division I team and come out on top?

PF: It was a big surprise for us all. I mean we caught them early. They were very young and for them it was an exhibition. But it woke us up to the idea that, ‘Hey we might have something here.’ We had an eligibility issue where one of our guys who played in that game had to sit out the rest of the year, he’s back now obviously. I don’t spend a lot of time talking about that game. I’d much rather talk to you about how we’re doing academically and how much we’ve gone up. And also because at the end of the day, we’re just trying to be competitive in the PSAC. It was kind of an adrenaline rush for us because when we walked out of that building we were like, ‘Woah. This is an Atlantic-10 team. We just walked in on their building and kind of shocked them.’ But our focus has never been on winning an exhibition. Our focus has always been on trying to be as competitive as we can in the PSAC and seeing where we might be in late February and early March.