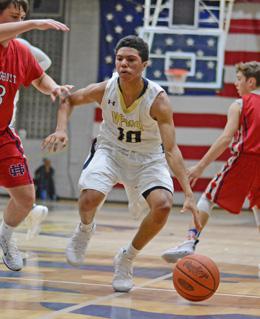 Myles Bunyon (above) is one of five freshmen on the Bloomsburg roster. (Photo: Josh Verlin/CoBL)

Entering his 12th season as the head man at Bloomsburg, John Sanow has the program in a very consistent state.

The Huskies have made the PSAC playoffs in five of the last six seasons and posted winning records in four of those campaigns. Last year, Sanow’s team went 15-12 (11-11 PSAC) before losing to West Chester 84-77 in the first round of the league postseason.

Back from 2016-17 squad is redshirt-senior Christian Mortellite. The 6-6 swingman finished third in the PSAC in scoring last season at 22.7 ppg.

Senior forward Kyle-Michael Rose and redshirt-sophomore guard Sam Saxton are the only other returners from last year’s team. Rose started in 15 games, averaging 7.4 ppg and 3.9 rpg. Saxton averaged 4.6 points in about 16 minutes of action per contest.

The Huskies will rely on a large group of newcomers to replace five of their top seven scorers from last season. Mortellite’s younger brother Peyton, a 6-4 guard, redshirted as a freshman last season but will be available for Bloomsburg this year. Transfers Hashim Moore (Princeton), Austin Harriott (Loyola, Md.) and Khary Mauras (Old Dominion) all come to Bloomsburg from Division I programs. Harriott, a Philadelphia native, and Moore both attended the Hun School.

CoBL recently spoke with Sanow about how he plans on getting the Huskies back to the PSAC playoffs. Here is the (copy-edited) transcript of our conversation:

City of Basketball Love: Taking a peek at your roster, it looks like a lot of freshmen and a lot of transfers this year. Any reason for that?

John Sanow: We have eight newcomers, just a changeover in our roster this year. We’re just excited about our new players who have joined our program. We have a lot of young players with six freshmen and three Division I transfers. Just a lot of teaching, a lot of work of developing chemistry on and off the floor.

CoBL: With the roster turnover, how much will you rely on Christian to carry you guys this year?

JS: Christian’s our leader. He’s our go-to guy. He’s a guy who’s been with us now for five years, a redshirt senior. He’s put a lot of work into his game and into our program. We’re looking for him, obviously with a young group and a lot of new players, to really lead this group on and off the court. He’s done a great job early on with our workouts. He’s come in this year in the best shape that he’s been in a while. I’m really looking forward to him having a big year and leading this young group.

CoBL: The other returners who played a lot of time last year were Kyle-Michael Rose and Sam Saxton. Thoughts on them heading into this season?

JS: Those two guys really had good summers. Kyle Rose has gained some strength in the weight room. He’s really active on the defensive end of the floor, blocking shots, rebounding, just being in great defensive positioning. He’s a guy we look to for his great defensive energy and effort on both ends. As a senior, we’re really looking for him to have a breakout year, where he has the opportunity to make a major impact. Sam Saxton also had a really good summer. He’s come back stronger and more confident in his all-around game. He’s handling the ball better, shooting the ball much better and his aggressiveness offensively, defensively has really been improved.

CoBL: What’s the goal for your program this year? What would be a successful season for you guys?

JS: To be honest with you, we’re just looking to improve each day. When you have so many young faces and new players in the program, there’s a lot to work on. The fundamentals of what we’re doing on both ends of the court, offensively and defensively, we have to establish those and establish those early. So just as a basketball team, we’re trying to improve every day, get better. These guys are really learning how to play together. You can see the chemistry developing daily on and off the floor. For us, we’ve been in the playoffs the last couple years, and I know the seniors are really looking forward to trying to make a run in the playoffs as seniors.

CoBL: What’s the talent level like of these transfers?

JS: I think all three guys bring very high talent level. Athletic, quick, guys that play hard on both ends of the floor. Austin Harriott, he’s a guy who can really make his teammates better. He’s a really good passer, good rebounder, very good defender. He’s working hard on learning our system. Hashim Moore, from Princeton, he’s a grad transfer, brings a lot of experience, very athletic, very strong. Does a good job of picking up things on the defensive end, and then offensively he’s learning as well how to play in our system. He’s a guy who brings a lot of leadership because of what he’s gone through in his career already. Khary Mauras is a high energy, high motor point guard who really likes to push the ball in transition. He’s a very good on-ball defender and he’s a guy who we’re really looking for from the point guard position to lead us in our offense. And he’s a guy who competes every day. He’s been really doing a good job of bringing high intensity to our practices.

CoBL: How many of the freshmen do you see finding their way into the rotation this year?

JS: The freshmen right now are working to just learn our system. They’re learning what it takes to be a student-athlete, the daily grind of going to class, study halls, weight room, all things that go into being a basketball player on this level. Every day, they’re working extremely hard to improve and get better but they have a lot to learn. Who’s going to make an impact at what time over the course of the season, we’re not sure about that at this point. But all of them are working extremely hard every day, and they’re very coachable young men. They come in with a great attitude and I’m just very excited to have them in our program.

CoBL: Christian’s younger brother Peyton took a redshirt year last season. How is he is looking the early going?

JS: He’s looking really good. He can shoot the ball extremely well just like his brother. He’s working defensively to improve in that area and is working to improve his overall game. The redshirt year I think really helped him to develop and get stronger as a player. I think we’re going to see him make a great impact on our team this year.

CoBL: Any changes for you guys systematically or stylistically this year, or will you play the same way as always?

JS: No, I think we like to play an uptempo game on the offensive end. We averaged 80 points per game last year. I think we want to maintain that style of play and even with our athleticism, with our quickness, with our speed, even push the ball even more. I think defensively is where we’ve got to get better, defending, rebounding. Rebounding is something that we really focused on in the offseason. We focused on it every single day in practice. If we can be a better rebounding team, I think we’ll be better on the defensive end, and that will give us opportunities to get out and run and push the ball and play more of an uptempo style than we even did last year.