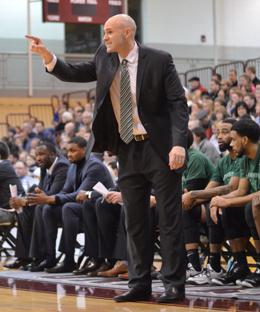 Now in his fourth year at Wilmington University, Dan Burke is establishing a pretty good culture of success.

His first year saw the Wildcats win 11 games -- which still represented the most in the program since it moved up to the NCAA from NAIA competition in 2004 -- and make a surprise run to the Central Atlantic Collegiate Conference (CACC) championship before losing to Philly U in the championship. The following season they won just nine games, but then jumped up to a 19-10 record last season, finishing tied for second in the South Division.

Burke will now have to replace two program stalwarts in Tyaire Ponzo-Meek (20.1 ppg, 5.4 rpg, 3.1 apg) and Drew Johnson (9.1 ppg, 4.1 rpg) among a class of four graduated seniors, and with Omari Dill-Pettiford (12.2 ppg) out for the season (knee surgery), Burke will be without five of his top six scorers from a year ago.

Nick Richards is back for his senior year after averaging 18.2 ppg as a junior, but after him they’ll need a number of former reserves to step up. Redshirt juniors Masner Beauplan (4.7 ppg) and Paul Medlin (2.8 ppg) will see large increases in minutes, as will sophomore Vince Kent. Two experienced transfers, Shawn Church (Lock Haven) and Zahir Robinson (Johnson College), should also contribute right away.

CoBL recently spoke with Burke about his first three seasons at Wilmington as well as looking forward to the future. Here is the (copy-edited) transcript of our conversation:

~~~
CoBL: You won 11 games your first season, but didn’t seem to make much progress the year after. What changed this past season?

Burke: I think the guys from the second year, the juniors became seniors and they really learned a lot from that second year that we were here. I think after the first year, maybe it might have been  me, might have been some of the guys, maybe we felt we had it figured out and then we had some things happen. I thought we played okay, we just didn’t have the roster to compete. But then I think we all took it on ourselves to have a chip on our shoulders for that year last year and we had a really good senior class with Tyaire Ponzo-Meek, Drew Johnson, Taj Almon, Brian Adkins, and they kind of set the foundation for us and showed us that winning is possible.

CoBL: Two years ago, you won four of your first five games, so even last year when you started off pretty well, you’re probably still thinking we’ve been here before. Then you lose three, you’re 3-3. After the Shippensburg loss, it seems like you guys figured yourselves out. What did you say to yourselves at that point?

Burke: I think we were still figuring some things out and going to Shippensburg, that was one of those games where we knew it was an out-of-conference game, we had a bunch of conference games coming up, so we just wanted to go in there, this might sound bad, we didn’t really expect to win, we just wanted to go out and compete against a great team like Shippensburg as well as we could. And we did that, so that gave us confidence, and the next game was Millersville, and then we had Philly U after that -- I think competing against a great team like Shippensburg, because we knew what they were going in, that gave us confidence to go in and know who we were and play well from there on out.

CoBL: Last year, you guys lost in the quarterfinals. How do you compare the feeling coming off a year like that as compared to your first year, when you weren’t as successful in the regular season but found yourself competing for a league championship?

Burke: I think that the first year, it was exciting, the way that we finished, and everyone congratulated me on the great year, but in reality, we didn’t have that great a year, we had a really good stretch towards the end of the year and then we won a couple games in the postseason. But then last year, and I think that it was a team with a whole lot of potential and we just played a bad game in the playoffs, and whenever you’re in a one-and-done situation like that, you kind of risk that. I think that, I felt bad moreso for the guys that weren’t coming back because I thought we had more potential than we realized at the end of the of the year. It’s unfortunate, but that’s part of college basketball.

CoBL: You’ve been able to have a decent amount of success in a short period of time at a place that doesn’t have the advantages of some of the other schools in the league. What do you attribute that to, and how do you try to keep that rolling?

Burke: I think number one it’s that I have a great staff, we’re all on the same page, I don’t have to worry about them saying one thing when I’m not around and we’re all totally on the same page, we get along, and I think the players see that. I think that we’re able to build a really good rapport with our guys and they buy into what we’re asking them to do. I think that we’ve found our niche recruiting, we know what kind of guys work here at Wilmington and I think the guys know that we have their best interests at heart so they want to play really hard for us. I think I would attribute our success to those factors.

CoBL: Does it help that you have some junior college background?

Burke: I’m not sure. It might, a little bit, and I think that no matter where you are, there’s certainly recruiting tactics that work at your school. If you’re at one school, it might be high-academic, i you’re at another school, might be a juco. You just have to find your niche and find what works at your particular school and go ahead and recruit to it.

CoBL: You talk about that big senior class from last year, led by Ponzo-Meek and Johnson. What were the first few practices like this year without them?

Burke: Definitely was different, because it was the first time in my career that those guys haven’t been there, especially Drew, and Ponzo, and Taj, Brian Adkins being a JUCO guy that came in. Actually, we have Nick Richards coming back, who did a lot on the court for us last year, but a lot of the guys we have that are going to be on the court for us this year either were on the team and didn’t play much last year, or were redshirting in practice with us. There is some continuity there, which helped. And we had a really good summer, we were able to compete in the Williamson Trade summer league and build some camaraderie there. For a relatively new team, it was pretty easy to pick up in the preseason.

CoBL: Is this going to be Nick’s team this year, in terms of leadership?

Burke: We have Nick, who’s a senior, and our other senior is Shawn Church, who graduated from Ridley in ‘13 and then played at Lock Haven, played at Lincoln and sat out with us last year. Those two guys, being seniors and veterans and real good competitors, they’re setting the tone for us this year. I would look at those two guys for a big portion of our leadership.

CoBL: You have Omari Dill-Pettiford coming back as a junior --

Burke: He’s going to redshirt this year because he had meniscus surgery relatively late in the summer. So we’re going to sit him out this year and save him for the year after.

CoBL: So then besides your two seniors, who of your returners are you looking to step up as contributors this year?

Burke: We’re looking for Masner Beauplan, who was Tyaire Ponzo-Meek’s backup last year, he’s going to step up and play a much bigger role. Miles Gillett, who had some really good games for us, is going to step up and play a larger role. Paul Medlin, who was injured last year, got a medical redshirt, he’s back, he looks pretty good. And another big guy, Vincent Kent, is ready to take a leap forward, I think. Of the returners, I’m looking at those guys to be ready to go.

Burke: Jermaine Head, who has three years left, he redshirted last year, he’s been awesome so far in our scrimmages and in practice and I think last year, the success of the team obviously because the seniors worked so hard, that’s the main reason, but we were able to have competitive practices because we had guys like Jermaine and Shawn in practice, pushing those guys that were going to be on the court. So he’s ready to go and he’s probably going to have the ball for us to start the season. Zahir Robinson is a junior college guy that we got and then Danny Walsh looks pretty good so far, he’s a redshirt freshman out of William Penn, another guy that practiced with us last year. Those are the guys that people might not know about that are ready to go.

CoBL: So what are your expectations for this group? What do you guys do well, and what do you need to focus on?

Burke: I think that this group so far has shown a competitiveness that is really exciting, a really high basketball IQ, we can introduce concepts and they pick it up really quickly, so as a coach that’s something I’m really excited about. In terms of expectations, our conference has gotten a lot better over the years, there’s really no off nights. I know that a lot of teams return a lot of players and guys have brought in transfers and really good freshmen, so not to sound cliche but we really just want to be the best team we can be and give ourselves a chance to win every game.

CoBL: You have a home tournament to start off the year. Is that something you’ve had before? Is there an advantage to getting one at your campus?