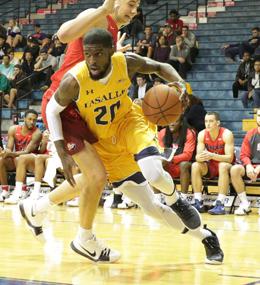 B.J. Johnson (above) had a strong effort as La Salle held off Shippensburg in an exhibition on Saturday. (Photo: Tommy Smith/CoBL)

After an exhibition against Seton Hall on Thursday night in New Jersey, La Salle returned home this weekend to make its second public appearance of the season.

The Explorers defeated Shippensburg 74-60 in a game much closer than the final score indicates.

Here are some thoughts from the scrimmage:

1. B.J. Johnson must be two-way player for La Salle to succeed
La Salle senior forward B.J. Johnson can certainly score the ball. He led the Explorers in scoring at 17.6 ppg game last season and will once again be counted on to give La Salle a reliable scoring option.

Johnson scored 14 points on 7-of-13 attempts on Thursday against Seton Hall. He followed that with 19 points on Saturday, including the first five points of the game to get the Explorers going. After a quiet start to the second half he was aggressive down the stretch. Johnson was 8-for-8 from the free throw line in the last 12 minutes of play.

However, the senior forward will need to be a stopper on the defensive side of the ball and a better rebounder if La Salle is to change its fortunes this season.

Johnson was active defensively from the opening tip on Saturday. He got into the passing lane for a steal on one of Shippensburg’s first offensive possessions and took it the other way for a fastbreak layup. Johnson tallied four steals in the game to go along with two blocks. He also had 13 rebounds, including nine of the defensive end.

At times, Johnson, who is listed at 6-foot-7 and 200 pounds, guarded Shippensburg big man Dustin Sleva, who is at least an inch taller and 30 pounds heavier than the La Salle forward. Sleva, who averaged 21.7 ppg last season, went 4-for-12 from the floor Saturday.

“B.J.’s much better defensively, and that’s probably the biggest key to our team and his future,” Giannini said. “Everybody knows B.J. Johnson can score. Everyone wants to see him be good at everything on a basketball floor, and there’s no reason he shouldn’t be. That’s his challenge and he’s done a great job rising up to the challenge.”

The senior guard, who averaged 8.1 ppg last season, scored 19 points against the Pirates. He was aggressive once again against Shippensburg on Saturday afternoon. Stukes shot 6-of-11 from the field and made 5-of-6 free throw attempts for 18 points.

Johnson and Stukes were the only two Explorers to reach double figures in both exhibitions.

The biggest takeaway from Stukes’ play in the early going is his ability to get to the free throw line. He attempted a total 14 free throw attempts in both contests.

Although he shot close to 83 percent from the charity stripe in 2016-17, Stukes got to the line fewer than three times per game. While they ranked first in free throw percentage in the Atlantic-10, the Explorers attempted just the ninth most free throw attempts. If Stukes can continue to get to the line, it will help La Salle get some easy points.

3. Shippensburg looks like PSAC contender once again
Shippensburg had La Salle's lead down to two at one point the second half. Had the Raiders hit a few more threes, the outcome of this one might have been a little different. Shippensburg shot 39 percent from deep last season, but they made just 28 percent of their attempts on Saturday, which included going 4-for-16 from three in the second half.

The Explorers held Shippensburg All-American forward Dustin Sleva in check on Saturday. He didn’t make a field goal attempt in the first half, but he still contributed 15 points and eight rebounds. With the La Salle defense honing in on him, Sleva made some excellent passes out of the post. There’s no question he will once again frustrate PSAC opponents.

Along with Sleva, the Raiders return three other starters from last season's PSAC championship team in Justin McCarthur, Antonio Kellem and John Castello, who combined for 28 points on Saturday.

The biggest hole on Shippensburg’s roster heading into this season was the point guard spot after the departure of Abe Massaley, a four-year starter who averaged 13.8 ppg and 5.2 apg. Taking his place will be senior Clay Conner.

Conner got off to a hot start, hitting two three point attempts and making four free throws for 10 first-half points, but he didn’t score in the second half. Conner tallied two assists and turned the ball over just one time. While he might not be the same type of scorer as Massaley, Conner will give Shippensburg coach Chris Fite an experienced leader on the court.

“He’s our floor general,” Fite said. “We’re going to rely on him a lot. I thought he did a great job tonight. I think he’s a real steadying influence out there. He made good decisions, and he understands what we’re trying to do. As a head coach, you want that from your point guard.”