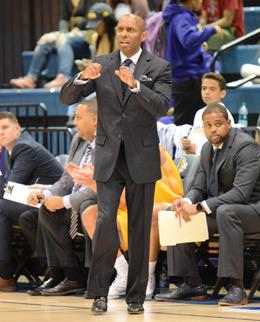 Damien Blair (above) and West Chester are looking to bounce back from his first losing season in nine years. (Photo: Josh Verlin/CoBL)

After a championship appearance in 2016, the Golden Rams went 14-15 (11-11 PSAC) last season. Blair’s team struggled to stay healthy throughout the year as no player saw action in all 29 games.

West Chester had five players average double figures last season, but Malik Jackson (Penn Wood), the league’s fifth leading scorer (19.2 ppg), and Zach Bare, who averaged 11.7 ppg coming mostly off the bench, are both no longer on the roster, though they remain at the school.

Tyrell Long (Bishop McDevitt) averaged 17.8 ppg and 9.7 rpg last season, but missed 11 games due to injury. The 6-5 senior guard is one of two senior on this year’s team. Graduate transfer Steve Smith, who attended Fairfield after a high school career at La Salle, is the other.

The experienced core will have to prepare several youngsters for the tough PSAC play for West Chester to return to its winnings ways. Here are the (copy-edited) highlights of our conversation:

City of Basketball Love: You have two big scorers to replace in Malik Jackson and Zach Bare. Who do you think fill their roles this year?

Damien Blair: To be honest with you, it’s going to have to be a team effort. Malik averaged over 15 points per game, and I think losing him is definitely going to hurt our offensive production, and Zach Bare is probably one of the better scores that I’ve ever coached. The two of those guys are big losses, but we’ve been preaching any five can win in this program since the beginning of time. It’s going to have to be a group effort in order to get the job done.

CoBL: Two years ago, you went to the (PSAC) championship game. What was last year like? Was that a little bit of a let down?

DB: It’s probably the first .500 season that I’ve had in 20 years as a coach. I don’t want to make excuses, but we had more injuries than I’ve ever had as a head coach, and we never had any consistency throughout that entire season. When you have that many injuries, it’s pretty tough to mix and match guys and to win in one of the toughest leagues in the country. We had some bright spots where we beat a really good Shippensburg team, we beat them by 30 at home and we were still missing Malik and a couple of other pieces. I think it gave those guys some confidence that they can play with anybody. It’s just a matter of doing the little things each and every night.

CoBL: Like you mentioned, your program has had so much success, so what was that like having a bit of and up-and-down season? Coaching wise was there anything different you had to do?

DB: It happens. If you look at the games that we played, I want to say six or seven of those games we lost by three or fewer points. The previous year, we won those games. We had Matt Wisely, who knew how to win down the stretch. Last year, we had a lot of young guys who were just trying to find out where they fit in the program, and I think this year, we have a few of those guys who have more experience and understand what it takes to win at this level and in those close games. They’re going to have to get it done this year so we don’t have another .500 year.

CoBL: Are there any of those younger guys you foresee having a breakout year, taking a step forward this year?

DB: Well, they’re not young any more. Matt Penecale is a junior. Jackson Hyland’s a junior. Tyrell Long is a senior. This goes without saying, but he’s a big part of what we do, and if you remember, he was gone for the first half of the season last year. We lost him for 12 games, and I think that had a huge impact on our success. He’s a guy who’s been in the program for a number of years and understands what I want from our players. There are some guys who have some experience, and there are also some new guys like Eric-Evan Longino and Jawan Collins and Terrence Moore, they’re all freshman, so they’re still trying to figure out what it’s like to play in this league and what they need to do in order to win in this league.

What are your expectations for Frank Rokins and Steve Smith?

Last year, our biggest issue was that I thought we lacked toughness. Our number one goal was to go out and find some guys that were tougher basketball kids and would withstand the grind of the PSAC. That was one of the reasons why we went out and got Frank Rokins. I think he brings that element to our team. But we switch defense, we play a matchup, we run a lot of different offenses, he just trying to get acclimated right now. The more that we can have him on the floor, I think the more of a defensive presence that we’ll have, so hopefully he can pick up the system fairly quickly and he can bring that element to the team. I think Steve Smith, he’s a transfer from Fairfield, he’s an experienced player that understands how to play the game, and he shoot the ball really well, so he’ll be able to stretch the floor for us, so I think we bring some toughness and experience with the transfers that we bring in and I just, like I said, I hope the freshmen they can figure out what it takes to be successful in this league very quickly because a lot of our success is going to rest on their shoulders.

CoBL: Do you see any similarities in Rokins to Matt Wisely in terms of skill set and versatility?

DB: You know what, I never really made that comparison. We had a guy by the name of Khalif Foster, who transferred here from Robert Morris. Frank reminds me of Khalif. Really tough, undersized, can finish around the basket, can go out and guard multiple spots. I look at Matt Wisely as a freak of nature, at 6-7 can guard the point guard spot, can guard the five. He was second in the country in rebounding. I don’t know if Frank’s at that level yet, but Frank right now is still trying to figure out our offense and defense. Matt knew where everyone was supposed to go on the defensive and offensive end, and a lot of times if they didn’t get there, he pulled that pulley for them. Frank’s not at that level yet.

CoBL: What do you see as the strength of your team this year?

DB: I think our depth. I’ll tell you if we can continue to be unselfish and play for each other, I think that will be one of the keys to our success. There’s not one individual who can point to and say he’s going to carry us. Every night it could be the 12th or 13th guy off the bench who comes in and gives us a lift to try to get us over the hump. But there’s a lot of unanswered questions with this team and we’re just trying to take it one day at a time and try to get better on both ends of the floor.

CoBL: Is there anything that really needs to click for you guys in order to bounce back and have another successful year?

DB: That’s a really good question. It’s funny because I think I put more pressure on last year’s team, and this year, we’ve been focusing on just playing the right way and playing together. I think if the chemistry of this team holds up and continues to grow and get stronger, I think that will be the key.

CoBL: How important will those older guys (Tyrell Long and Steve Smith) be in bringing this team together?

DB: It’s huge because, like I mentioned, there are five freshmen that could potentially contribute to this team, and they have no clue what it’s like to play at Gannon, Kutztown, East Stroudsburg. I know for a fact because I’ve been in these league for a number of years, the PSAC is one of the best Division II leagues in the country. So our older guys have to prepare them for that, let them know that there’s no night off in this league, and even the teams that don’t have a good record can beat you by 20.