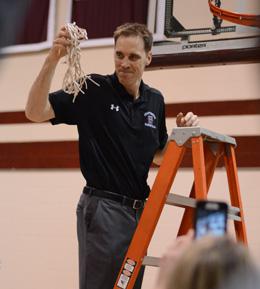 (Ed. Note: This article is part of our 2017-18 season coverage, which will run for the six weeks preceding the first official games of the year on Nov. 10. To access all of our high school and college preview content for this season, click here.)

Over the past two seasons, Swarthmore has developed into one of the more imposing Division III basketball programs in the area.

Specifically a year ago, in head coach Landry Kosmalski’s fifth year, his team rolled to a 23-6 record, a national ranking, a Centennial Conference title and a victory in the first round of the NCAA Tournament.

Seven players from that team are no longer on the Swarthmore roster.

But with the return of the top two scorers from last year’s squad, as well as several quickly improving newcomers, the optimism surrounding the Garnet remains intact entering a brand new campaign.

“We kind of have a new team this year,” senior  I think a lot of guys that we had on our championship team last year left for various reasons, and we have a lot of new guys coming in. It’s a completely new team this year, and that makes things exciting, especially this time of year in practice after playing different roles. It’s good to have some new energy and new faces.”

The most notable departures — forward Chris Bourne and guard Matt Brennan — for Swarthmore combined for 16.6 points per game in 2016-17. The Garnet will also lose the services of Henry Cousineau (7.5 ppg) at guard and Andrew Kauffman (6.0 ppg) at forward.

With that being said, the only double-digit scorers from last year’s team are still around, as junior guard Cam Wiley and senior guard Zack Yonda — who combined to average over 30 points last year — comprise half of a talented core of upperclassmen.

Wiley, a 6-0 junior from Atlanta, was named a Third Team D-III All-American by the NABC and made the all-district first team after averaging 18.5 ppg and 4.6 rpg.

“Both all-conference players last year, so obviously we’re excited to have them back with one more year of experience under their belts,” Kosmalski said of Wiley and Yonda. “But our offense is general pretty equal opportunity, so we need to make sure we have all five guys out there able to space correctly and make shots and play unselfishly.”

In terms of making up for what was recently lost on the Swarthmore roster, those two bulk scorers won’t be able to replicate last year’s success on their own.

The Garnet also bring back two other seniors, 6-foot-8 forward Robbie Walsh and 6-foot-3 guard Jim Lammers, who will be looked to as leaders alongside the likes of Wiley and Yonda.

“We’ve only got three seniors and one junior this year, so I think all of our older guys are going to have to lead and set a good example,” Kosmalski said. “I think it’s less about two particular guys, it’s more about our older veteran players.”

Having such a solid, experience core, according to Kosmalski, will be “huge” when trying to acclimate five brand new Garnet players.

The newest class to enter Swarthmore has especially impressed Kosmalski in its rapid development, a particularly important trait in a year where freshmen make up nearly half of the team’s roster. 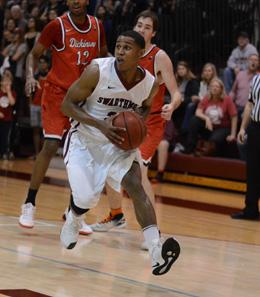 A class that comes from states all over the country — Virginia, California and Massachusetts, just to name a few — will clearly have a lot on its shoulders, but has already shown promising signs in terms of its ability to handle pressure.

“I would say a little more than in the past, I think it’s just personality-based, I think they are more composed about all the information coming at them,” Kosmalski said. “We give our guys a lot, and I think in the past we’ve had guys where kind of their heads are exploding. While our freshmen may be feeling like that, I haven’t noticed any signs of it, I think they’re taking in things pretty well.”

From the perspective of the seniors on the team, leading such a group of freshmen has been a considerably enjoyable process.

“The freshmen have been great, listening, learning every day and trying to get better as much as they can, it’s been pretty fun,” Lammers said. “Zack, Rob and I, the seniors, and Cam, the upperclassmen, it’s us four kind of running the show so to speak as far as leading the team on the court.”

And, according to Yonda, having experience with success over the past two seasons — a pair of campaigns that yielded a combined record of 45-14 — directly helps the Swarthmore veterans set an example for their younger teammates.

“We know what it takes to do well and succeed,” he said. “I think we can bring that every day in practice and help teach the young guys how hard you have to practice and how much intensity you have to bring to things like film and scouting. I just think that experience helps with a lot of different things, and I think it’s going to help the younger guys to have kids to look up to to set an example of what it takes to be successful.“

With several moving pieces and variables from top to bottom on the roster, Kosmalski emphasized the importance that the right mindset will have on a young group.

“I think generally, it’s namely just our team coming together,” he said. “With our young guys and our veterans, and really just trying to focus on what we’re trying to do and not worry about anything on the outside.”

And, according to Lammers — one of three seniors who have grown quite accustomed to success — the hope is for their final year in the program to be one for the books.

“Considering where we started as freshmen and the kind of progression we made, we just kind of want to keep that going,” he said. “Last year was so much fun, I mean, we were talking all offseason how we want to do it again. So that kind of drove us through the offseason and into the preseason and now that we’re starting to get going, that’s given us inspiration and is driving us forward.”