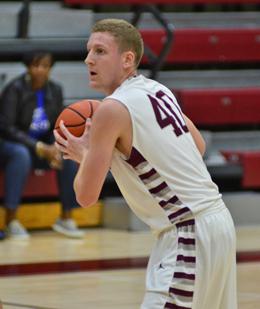 (Ed. Note: This article is part of our 2017-18 season coverage, which will run for the six weeks preceding the first official games of the year on Nov. 10. To access all of our high school and college preview content for this season, click here.)

Dave Pauley has been around USciences for a little while.

Now in his 18th season as head coach after spending 18 as an assistant under longtime head coach Bobby Morgan, Pauley is undeniably the face of Devils basketball, having overseen the transition that took the program from NAIA to Division II in the early part of the 21st century, and then led the program to its first NCAA Tournament win in 2015 behind the stellar play of Garret Kerr, currently playing professionally in Europe.

Last year, USciences went 13-15 overall, with an 11-8 record in Central Athletic Collegiate Conference (CACC) play. The Devils won 11 of their final 15 games after an early-season nine-game losing streak, however, before a loss to Bloomfield in the league quarterfinals.

CoBL spoke with Pauley earlier this week to discuss his longevity at the school as well as preparations for the 2017-18 season.

Here’s a (copy-edited) transcript of our conversation:
~~~

CoBL: You’ve now been a head coach as long as you were an assistant coach, 18 seasons. How do you compare the two eras?

Pauley: That’s a good question. I’m at an institution that values academic excellence, academic achievement, values teaching. We’re fortunate to get kids to come and enter into the professional world. Time flies, it goes pretty quickly, you try not to look back. But I’m fortunate that I know just about where all my former players are and what they’re doing, having a sense of what they’re like family-wise, as a father, as a professional. Type of lifestyle they lead, type of money they make. That’s pretty significant. So those are the things I remember the most. It’s the old saying is, what’s your team going to be like, and I always say I’ll let you know in 20 years.

CoBL: So from that regard, you have a reminder this year of the time’s passing in that one of your freshmen, Brendan Starr, you coached his father as well. Is this the first time that’s happened?

Pauley: No, Jack Kelly played when I started as an assistant, and his son Danny [Kelly] is now on the team. So it’s really the second go-around. And on that same vein, I’ve coached 18 sets of brothers over 36 years.

CoBL: But that’s different than a father and son...

Pauley: Different, but just as significant, I think. That the parents feel comfortable with the program and they send the younger son there. So we’ve been really blessed that way. It makes it easy recruiting, too. [Laughs]

CoBL: So what is it like to have a father and then the son?

Pauley: It reminds me how old I am. [Laughs]. It’s tradition, it’s consistency, of having the same guy in the position, it’s the power of the school, having the same people in place. A lot of universities miss that, that’s very powerful, having continuity of coaches. Coach Morgan started in 1970, here we are in 2018 and it’s been two coaches. Look at Villanova and Temple, they haven’t had that many coaches over a long period of time. That’s sustained excellence.

CoBL: In terms of the rest of the freshman group, how have they been so far and who’s stood out to you?

Pauley: I don’t really worry about the basketball too much, I worry about the adjustment to college, being on their own. Being challenged academically, how they get along in our campus community. How well do they do? Our opponents are biology, chemistry, writing and rhetoric. I mean, they’re significant opponents, we’ve got to win that battle, too.

But we have seven freshmen, which energizes me, and they’ve all adjusted very very well and they come from different backgrounds, so that’s nice. Again, that’s the power of our school.

CoBL: What about in terms of from a basketball standpoint? Any you feel will contribute right away?

Pauley: I’m hesitant to throw freshmen into the fire, I like to ease them in, I know I didn’t start Garret [Kerr] for a game or two and then I realized my mistake pretty quickly. Paddy Casey from Scranton Prep has been impressive, about a week in. We know the freshmen can make contributions, but the way I look at it is, moreso than the games, do they help us in practice? Everybody talks about playing time and it’s not playing time to me, everybody helps us win and that starts on the practice floor. You have about 90 practices a year, that’s where they help us, that’s where they help the program, what they do daily. We’ve been fortunate that we have program players that in four years similar to high school, freshman, sophomore, junior and senior, by the time junior and senior we hope we have more of a finished product and a kid who’s ready to go and ready to compete at the Division II level.

CoBL: Aside from Gill and Okolo, you return seven of your top nine...

Pauley: Yeah, we return a lot of players. We lost 243 practices last year, individuals missed 243 practices last year, so we really had the injury bug last year. We have guys coming off injury, and I expect them to make a contribution, so that’ll be a challenge for them after not playing a lot. Flo Da-Silva from Eustace is a senior and Will Gregorits from Virginia, we expect those two to be the leaders and be significant players for us. Now, the question is, who’s with them? I don’t know that yet.

CoBL: Two weeks of practices left, what are you looking for now to figure that out?

Pauley: Great question. I think I try to eliminate things that cause you not to play well. Competitiveness, toughness. We’re limited in practice time, we only go about 90 minutes every day, so we have to compress the teaching into a small period of time. So our time together is limited. And can we function as a team? Can we move as one? That’s another challenge every year. Even though you return players, and I think every coach would tell you this, it’s not the same. Every year is different. So you figure out how we play, how we live together, how we practice together and how we perform together.

CoBL: After being around USciences 36 years, I’m sure you start start to figure out, get a feel for how things are going to go. How is this group starting to shape up?

Pauley: I would say, everybody would say this, regardless of level -- we have a long way to go. It’s a long season, you don’t know the twists and turns the season will take. One of the challenges we have is we have kids coming to practice after a test or the test the next day, that impacts us daily, the academic rigors. I really don’t know, and we’ll find out, quickly. Our non-conference schedule is very tough, we’ll play four teams I think that will be ranked in the top 25 preseason. We’ll be tested, I’ll throw them to the wolves and see what happens. Because really, college basketball to me is playing to get to a one-and-done game in March. That’s really the season. You’re playing for a one-and-done game. That’s what you aspire to. That’s the end result, that’s the reality of it. One-and-done, and then you move on. Can you get to March? Good teams play in March. And we hope to be a good team in March.

CoBL: From a team perspective, what specific things do you see in practice that you feel you need to improve on to get to that point?

Pauley: I think the first part of the season, conditioning. We’ll try to be the best-conditioned team on our schedule. I think the system, the system that we decide to play and how we tweak that. And then the last part of the season is refinement, take some things that work, refine them, make them better, take some things that don’t work, get rid of them. There’s a certain piece of experiment, too, with all of this. To me, the season is three parts: conditioning, system and refinement. That’s how I look at it. We’re still in the conditioning thing. Getting their legs ready and getting their minds ready.