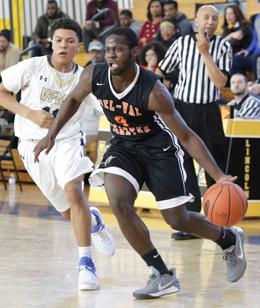 Antwuan Butler (above) committed to Austin Peay after they offered in July. (Photo: Mark Jordan/CoBL)

“I was always like being the underdog,” he said. “I always play with a chip on my shoulder.”

Prior to a mid-July trip to the Under Armour Association Finals in Atlanta with his WeR1, Butler felt people had yet to see the best out of him. At that point, he had received two Division I offers, but had no idea the perfect school was waiting for him in north Georgia.

That weekend, Austin Peay entered the life of the 5-foot-10 guard, first with a scholarship offer, and then with several months of constant interest.

“I had a couple offers, but Austin Peay was the school that really came at me the hardest,” he said. “They made me feel like they wanted me the most.”

Four months later, the Governors’ latest commit is prepared to silence the next set of naysayers as a senior at Cardinal O’Hara, fresh off of one of the biggest decisions of his life to attend the Clarksville, Tennessee institution.

It was the relationship that first-year APSU head coach Matt Figger and his staff built with their first signee, over the time since they first emerged as a potential landing spot for Butler, that ultimately stood out to him the most.

“I felt more comfortable with the coaching staff,” he said. “They kept really cool, really real, solid. My family, my parents and everybody that helped me with my recruitment felt the same way about Austin Peay.”

Butler also happens to have a solid relationship with his current head coach, Jason Harrigan, at O’Hara.

The two initially met as coach and player at Delaware Valley Charter, Butler’s home for the first three years of his high school career. Harrigan was hired at O’Hara ahead of the 2016-17 season, Butler followed suit into the Lions program after Del-Val closed its doors this past summer.

Such a connection allowed Harrigan to play a helpful role in Butler’s recruiting process, especially leading up to his senior year.

When push came to shove and Butler made a decision that Harrigan said he thought came “a little early,” he was still all for the choice to play at Austin Peay.

“I think the coaching is excited to have him,” Harrigan added. “I’m really excited for him. I think he gets to go, he’ll play, I know the coaches are excited to work with him, they have a good coaching staff. I expect to him to be a really good college basketball player as well.”

In particular, the relationship he feels he’ll be able to build over the next for years in the Austin Peay program, played quite the factor.

“They were very welcoming, they were telling what they would use me for at Austin Peay,” he said. “Of the players that they used to coach before, they all have a relationship with them, and that was important to me.”

As a crafty pass-first point guard with an improving jump shot, Butler said the coaches at Austin Peay have been expressing interest in his ability to “come off screens, run the team, and have the ball in my hands.”

But according to Harrigan, Butler’s most impressive growth has been off the court.

“I think that he has grown personally and academically,” Harrigan said. “He has matured so much. For him being able to commit, that was the last piece of his development, just him being able to make that decision, he has a strong support system, great family, great people in his corner.”

Now with the weight of a college decision off of his shoulders, Butler’s entire focus turns to one last season at Cardinal O’Hara, a program that has remained in the bottom two of the Catholic League pack each of the last three seasons.

Given the depth of the conference and the Lions’ recent history, the expectations for O’Hara in Butler’s final year? Not too lofty.

But that’s just how he likes it.