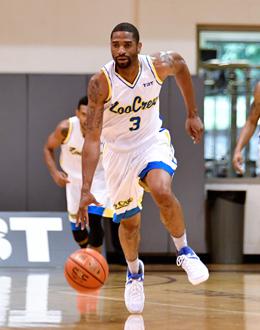 No matter the stage of his basketball career, Philadelphia has always been where Jesse Morgan has felt most comfortable on the basketball court.

Playing at both Prep Charter and Olney in high school, finishing his college career at Temple, and returning to the city to compete in The Basketball Tournament, Morgan has enjoyed every second of playing in the city he calls home.

“I’m from 19th and Montgomery Street, it’s the city I grew up in, and I live here during the offseason, it’s home for me,” Morgan said.

Even as he moves up the ladder in European basketball, looking for another chance to prove himself to an NBA team, Morgan spends the offseason at his home in East Falls, right around the corner from Thomas Jefferson University, where his Zoo Crew team was upset in the opening round by Sideline Cancer.

He spent three full seasons in college at the University of Massachusetts,  averaging 13.9 points per game in his junior year. After being dismissed by the team in 2013, Morgan came home to play in his favorite city again. He ended up Temple, and was granted eligibility to play during the second semester of the 2014-15 season.

In those 27 games, Morgan was one of the Owls’ standouts, scoring 11.9 points per game. Thanks to his 35.4 percent shooting from beyond the arc, Morgan was regarded as one of Temple’s best shooters.

For Morgan, coming home meant the world to him and his family, who were able to attend each and every home game the Owls played that season.

“Senior year at Temple was like home for me, my family was at every home game and that was amazing,” he said.

It was his standout senior year that earned Morgan a call from three NBA teams, where he was awarded the opportunity to play in the NBA summer league for the Jazz, Thunder, and Bucks. Even though he was released by all three teams, the former Owl found his time in the summer league to be very beneficial for his game.

“I see the summer league as a showcase, you get a certain amount of time out there on the floor and you need to make the best of your time,” Morgan said. “The competition is tough, and it gave me a chance to see where I need to improve and I got  to play with players that were drafted.”

Morgan’s ability to score the ball at will was on full display during his rookie year in Europe, where he played in Luxemburg. He averaged 27.2 points per game, second highest in the league. He scored over 30 points 10 times in a 26-game season.

Thanks to the talent he displayed playing in lower European leagues as a rookie, Morgan has already been signed to play this upcoming season in Germany, where he will now play for the Rheinstars in Cologne.

“Playing overseas is tremendous experience and adjusting to their game has been good for my game to help me prepare for the next level,” Morgan said. “In Europe, you get a chance to grow with your teammates, work on your game, and grow over the season.”

Morgan is steadily rising in the ranks into the premier leagues in Europe, and one day hopes to get a second chance to play in the NBA.

“I think continuing to show that I’m working to improve and I can handle the professional life, be a good teammate, and the little things will help me be successful,” he continued. “Hopefully I get a chance to chase my dream and get another chance to play for an NBA team,”

When he got the call from the Zoo Crew to join their TBT team, the decision was a no-brainer.

This may have been Morgan’s first year in the tournament, but it will certainly not be his last.

Morgan’s 17 points on 6-of-11 shooting weren’t enough to help carry the Zoo Crew to victory, but he definitely expects to be back next year.

“It’s tremendous for basketball, you’re bringing a lot of people together, and you’re reviving a lot of guys’ careers,” he said. “Just today I had a chance to play Levance Fields, and I used to watch him growing up back when he was at Pitt with Brad Wanamaker.

“[And] If there’s always a prize on the board, you know I’m playing,” Morgan said.

Anytime that Jesse Morgan gets a chance to play in his hometown, he doesn’t think twice.