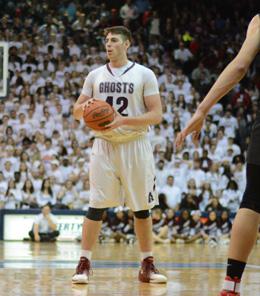 Midway through the 2016-17 season, Joseph O’Brien was suddenly out of options.

The Abington senior, a 6-foot-8 forward on the Galloping Ghosts’ squad, had picked up a pair of Division II scholarship offers prior to the season, but by the time the calendar hit January, they were gone: one due to an injured player staying another year at his college, the other because the coaching staff felt he just wasn’t quite good enough.

It was certainly a difficult time for the 18-year-old.

“I was realizing that I needed to play better and do more, so that’s when I had to step it up,” he said. “It was a low point in seeing the scholarships being taken away.”

It wasn’t until while playing at a camp in May that O’Brien finally got the break he needed.

Kutztown head coach Bernie Driscoll had been involved with O’Brien before the season but hadn’t offered, and then fell out of contact during the course of the year.

“I was down [at the camp] and called my assistant and said ‘you know, Joe’s playing in the game,’” Driscoll recalled, “and my assistant called and said ‘I thought he’d committed.’

“[We] kind of lost touch there, he didn’t want to sign early and [we] just got involved late.”

Within a few weeks, the deal was done: O’Brien went on a visit, received a scholarship offer and signed his binding National Letter of Intent, joining Shipley guard Kiyon Hardy as pledges for the Golden Bears’ incoming freshman class.

They’re joining a program that went 26-4 this past season, including 20-2 in the Pennsylvania State Athletic Conference (PSAC), qualifying for the NCAA Tournament before losing to IUP in the first round.

“It was amazing,” O’Brien said. “I waited a long time, it was very stressful for my family and for myself as well; now that I’ve chosen something and made my pick, it’s just so much easier.”

A solid-bodied big man at 6-8 and 245 pounds, O’Brien brings some significant size down low to a versatile Kutztown frontcourt. He and rising sophomore Max Wagner are the two 6-8 players on the team, but Wagner is much more comfortable at the stretch ‘4’ position.

“We really don’t have a ‘5,’” Driscoll said. “We have Dan Cuevas at the ‘5’...he’s really a ‘4’, Max Wagner from Pennridge will also compete at the ‘4’ spot and then Joe gives us that big body that we can compete with the IUPs and West Chester’s, the Fairmount States, that we don’t have, we just don’t have that real physical presence.”

At Abington, O’Brien wasn’t needed to be a primary offensive contributor, with high-major target and 6-7 forward Eric Dixon taking the starring role for the Galloping Ghosts over the last two seasons. But he showed his value when it mattered most, going for 13 points and seven rebounds in the district semifinals and six points/seven rebounds in the title game.

O’Brien has surprising athleticism for his size, with the ability to challenge shots at the rim, and he’s lately showed the ability to step outside and knock down a 3-point shot if needed.

“Hopefully I can come in and do enough work and get my starting spot as a freshman, which would be fantastic,” he said. “They said I can be a dominant post presence on both ends of the floor, and (lately) I’ve been changing my play style to the outside a little more as well, so hopefully I can bring whatever they need to the table.”