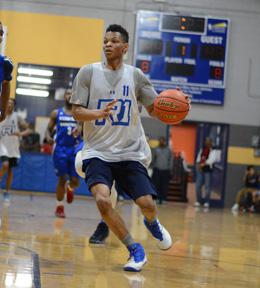 High-scoring sophomore Isaiah Wong (above) will be on the 17U Under Armour Association circuit with WeR1. (Photo: Josh Verlin/CoBL)

This week, we’ll be taking a look at the local AAU programs whose players will be drawing the attention of quite a few college coaches over the next two weekends, which constitute the April Live Periods.

The defending Under Armour Association champions, WeR1 has a big legacy to live up to after Trevon Duval and company bested the rest of the field last year, but they’ve got another strong 17U group that could very well make a run at going back-to-back.

Breakdown: Leading the way for this group will be two guards who were both integral parts of last year’s 17U squad. Ayala, a 6-5 guard originally from Delaware, has completely transformed his game since reclassifying two years ago, and his offer list reflects that: Oregon, Creighton, Indiana and Syracuse all came aboard in the last six months, joining a group that includes Arizona, UConn, Maryland, Miami (Fl.) and many more. Another 6-5 wing, Martin will be doing a prep year at a to-be-determined New England school as his recruitment was going from mid-major to high-major by the end of his senior year at William Allen. They’ll be joined in the backcourt by another high-major target, Wong, a 6-3 guard with offers from Temple, Rutgers, Monmouth and St. Joe’s but interest from schools including Arizona, Syracuse, Ohio State and more.

That trio are far from the only notable guards on the squad: Butler (6-0) is a strong-bodied lead guard with terrific court vision; Simon (6-3) is one of the best shooters in the area; Esquilin (5-11) is a dynamic scorer with solid bounce from the Lehigh Valley; Curry (6-2) is an athletic slasher who can score from all three levels. The frontcourt is a strength, as well. Deng (6-10, 210), McNair (6-9, 250) Frink (6-8, 240) and Johnson (6-8, 225) are all Division I prospects, and between the four of them will make it tough for any team to score inside. Deng is the longest of the bunch, and the raw-but-intriguing prospect already has offers from Temple and St. Joe’s; Johnson, more polished but not quite the same size, has offers from Lafayette, NJIT, Drexel and Rider, among others. With strong guards, wings and bigs, this WeR1 squad has something for everyone, so expect to see many different programs from all levels of D-I watching their games. 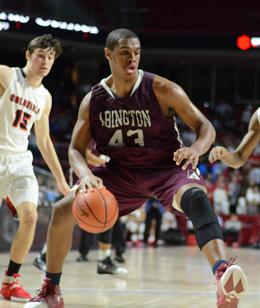 Breakdown: With the WeR1 program’s best 2019 prospect playing up on the 17U squad, that leaves room for several other budding stars to shine on the younger team. The main focal point of the offense will likely be Dixon, a 6-8, 250-pound power forward and two-year starter for Abington; the big-bodied lefty with the soft touch and nimble feet has range out to the 3-point arc but is extremely effective within 12 feet of the hoop. He and Sabol (6-8, 250) give WeR1 a sizeable frontcourt, along with the 6-6 Knox and 6-6 Lyons. The guards will be led by “Bones” Hyland, a stick-skinny 6-3 guard with a slick handle and great court vision; he’s also a plus outside shooter to boot. Paz (6-0) is one of the top guards in the Lehigh Valley, and he’ll play more of a distributor role for wings like James (6-5) and Vaughn (6-4). If this team can get the ball flowing through the post and find some shooters on the wings, they’ll win a lot of games.