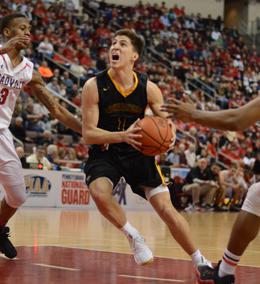 --
For anything to happen other than Archbishop Wood hoisting the PIAA Class 5A trophy at the conclusion of Friday night would mean Meadville would have managed to find a way to get one of the most confident and most consistent teams in the state off its game.

Not even for a minute.

A Vikings squad that set sky-high expectations with impressive early-season play lived up to them through the final game of the year, putting on a dominant performance against the Bulldogs, capturing the program’s first state championship with a 73-40 win.

“It’s crazy, it’s always a dream of every kid playing high school basketball, especially in Pennsylvania, to get here and win on the biggest stage there is, and we did it,” senior Matt Cerruti said afterwards. “Pretty good feeling to go out, last game for our four seniors of our career, to win the state championship, you can’t really describe that.”

“We worked hard for this all summer, all year, and it just feels good to go out on top,” senior Collin Gillespie, the Vikings’ stalwart Villanova commit, said with his typical stone-faced expression.

Even after a state championship, he wasn’t that excited?

Just several weeks after winning Wood’s first-ever Catholic League championship, Wood looked unshakable in the GIANT Center, despite a few thousand Meadville fans swathed in red making the neutral-site arena into more of a home atmosphere for the Bulldogs.

Playing in front of an unfriendly crowd has become familiar territory for a program that’s played every single one of its games since early January on a road or neutral court after a wall inside Wood’s gym partially collapsed.

“It was fitting that...it was a road game on the road with everything to happen with our gym, not having a gym all year, playing everything on a neutral site,” head coach John Mosco said. “So we came here, just played it as another away game and got after it.”

The Vikings (28-3) jumped out to a 15-point advantage in the first quarter alone and never looked back, doubling up Meadville (26-2) after both the second (40-21) and third (58-29) quarters. With eight different players scoring, they knocked down 11 3-pointers and forced 14 turnovers, winning the rebound battle 50-41 and holding Meadville to 22 percent from the floor.

Aside from committing two fewer turnovers and six fewer fouls, there wasn’t a statistical category in which Meadville had an advantage.

Wood made it look easy, but Mosco -- the fourth-year boss who spent the previous 16 learning under Carl Arrigale at 3A powerhouse Neumann-Goretti-- knows that only comes from a lot of learning behind closed doors over the last few seasons.

“We work hard in practice, the kids get after it, we’re demanding in the practice court,” he said. “I learned from Carl that you’ve got to give them a little freedom playing...if they make a mistake, they’ve got to be able to play through it.”

As it had been all season, Wood’s offensive output was a combination of the sum of its parts. 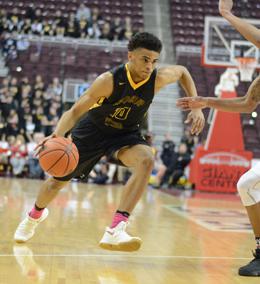 Tyree Pickron (above) led Wood with 18 points in the win. (Photo: Josh Verlin/CoBL)

There was junior wing Tyree Pickron, whose two first-quarter 3-pointers helped Wood get off to a hot start and got him on the way to a team-high 18 points, including five triples. Pickron led an impressive all-around effort from the junior class: 6-11 center Seth Pinkney chipped in a double-double with 11 points and rebounds, plus four blocks; 6-4 Andrew Funk had 10 points and four rebounds; 6-7 Karrington Wallace had four points, three rebounds and three blocks.

And then there was Gillespie, the engine that drives the train. The 6-foot-2 Villanova commit flirted with a triple-double in his final high school game, finishing with 15 points, 10 rebounds and eight assists before departing with three minutes to play.

He finishes his Wood career as the best player in program history, falling short of the Vikings’ scoring title by 100 points or so, but certainly accomplishing feats no player had before: Catholic League MVP, Catholic League champion, state champion.

“It means a lot, it means a lot for the people that came before us,” Gillespie said. “The group like Tommy [Funk], Luke Connaghan, Pat Smith, all of them, because that’s when I started. And they really got the program going and moving forward.”

Wood has been playing this way ever since early January, after Father Judge came into the school’s Warminster gym -- the last game held there before the wall collapse -- and pulled off a 68-60 upset to start off Catholic League play.

The Vikings didn’t lose again, winning their final 22 games of the season. Aside from the semifinals and finals of the Catholic League playoffs, no team has come within 10 points since late January.

“I think that was the biggest moment of our season for us, more than the gym, more than anything,” Otto said. “That loss woke us up...it really just proved that we all stuck together and I think it was just a turning point for us.”

“It really gave us a different perspective of how the season could go,” Gillespie agreed. “I think it made us play with a chip on our shoulder every night, because the Catholic League was so tough.”

Now that the season is over, the seniors will depart to their respective schools -- Gillespie to Villanova, Otto to Moravian, Cerruti to one of the several Division II schools that are recruiting him. A fourth senior, Shawn Thompson, will be playing football at the next level.

With the program’s first Catholic League and state championships coming in the same season, there will finally be a boys’ basketball banner hanging in the Wood gym -- whenever it gets finished. Whenever those seniors come back to the school, they’ll have a reminder that they were the ones who set the bar at its highest.

And that group will have plenty to remember for the rest of their lives.

“Just how much of a family we are, we’re always together, we all love playing together, I think we have great friendships and relationships,” Gillespie said. “I’m just going to miss being with all of them every day, it was fun.”