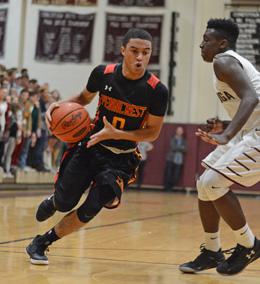 Tyler Norwood (above) surpassed the 1,000-point mark for Penncrest during the district quarterfinals. (Photo: Josh Verlin/CoBL)

In a quarterfinal round that saw all but one game decided by four or less points, and all but one game won by the higher seed, four more than deserving teams advanced to the District 1 5A Quarterfinals, which will take place on Wednesday night at Temple University’s Liacouras Center.

Here’s a look at the night’s matchups:

Game 1: No. 2 Great Valley vs. No. 3 Penncrest (6:00 PM)
Penncrest is no stranger to fighting its way to wins in close contests.

Of its 24 games played this season, 16 of them were decided by single digits, and Penncrest came out on top in ten of those close-knit affairs.

With their last three games all being in that category of single-digit differences, the Lions (18-6) are getting ready to make a long playoff run using that close-game experience to battle through the dog days of late February and March.

After falling to Lower Merion on a buzzer-beater in the Central League semifinals and then topping Harriton by a score of 51-44 in the first-round of District play, Penncrest had quite possibly its toughest challenge yet in its quarterfinal contest with Wissahickon.

Thirty-two minutes of basketball weren’t enough in that one, as it took Penncrest until overtime to top the Trojans by a score of 60-56 and advance to the district semifinals.

“It’s kind of like we’ve been in that mode for a little while now,” Penncrest head coach Mike Doyle said. “We’re not built for blowouts and we’ve had a tremendous amount of close games. It’s just the way this team is built, we’re not going to blow anybody out. We’re in it for the long haul, that’s kind of what we try to do.”

Up next, Penncrest will try to use this experience to keep its postseason winning streak of two alive and advance to the district championship with a win over Great Valley (16-6) in the semifinal round.

Topping the Patriots will be no easy task though, as Great Valley has experienced quite a tremendous amount of success this season as well.

“Great Valley runs a tremendous offense,” Doyle said. “It’s out of the Princeton playbook, looking to get back doors. We’re going to have to rise to the challenge.”

Great Valley offensive attack is led by sophomore Alex Capitano, its only returning starter from last season, who cashed in for 15 points in Great Valley’s 41-38 win over Springfield (Delco.) in the quarterfinal round. He's surrounded by a group of mostly juniors, including sharpshooting wing Liam Ward, point guard Matt Porreca and forward Nate Graeff.

Doing the majority of the offensive damage for Penncrest is junior guard Tyler Norwood, who poured in a game-high of 30 in Penncrest’s overtime triumph of Wissahickon.

Unfortunately for Penncrest, Norwood’s offensive prowess is no secret, as the guard has been a staple in Penncrest’s rotation since his freshman season, surpassing 1,000 points in the Wissahickon win.

“From last summer, we’ve practiced stuff knowing what defenses are going to throw at him and the other guys are pretty comfortable knowing where to flash, where to get shots from and what we’re trying to accomplish when teams try to take Tyler out,” he added.

Those “other guys” Doyle mentioned are Mike Mallon, Justin Ross, Chris Mills and Manny Ruffin, who were all a part of Penncrest’s 2014-15 team that made a run to the state tournament as well.

“Mike Mallon and Justin Ross have quietly put a really nice February together, both of their scoring averages are up,” Doyle said. “Chris Mills and Manny Ruffin are also chipping in with a few more buckets and their ability to make foul shots is huge also.”

This experienced core are no strangers to hard work as they have been working for this opportunity all season.

“This was one of our goals in the beginning of the year. First districts and then try to get into the state tournament and it’s been a great experience for the kids,” Doyle said. I couldn’t be any happier for them because they truly work. It’s a great group to work with and they work extremely, extremely hard." 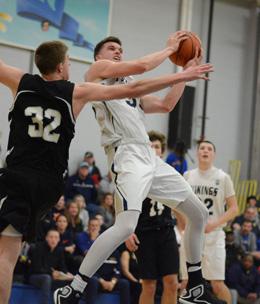 The return of Matt Faw (above) has Upper Merion looking like the favorites in District 1 5A. (Photo: Josh Verlin/CoBL)

Game 2: No. 4 Bishop Shanahan vs. No. 8 Upper Merion (7:30 PM)
Entering this season, there were a lot of expectations for Upper Merion.

With an entire roster of seniors, joining the Pioneer Athletic Conference, this talented senior class was hoping to win both the league and district title.

Despite falling in the Pioneer Athletic Conference Semifinals, and struggling without Holy Cross commit Matt Faw most of the season, the Vikings picked up one of the most impressive wins in the entire district, clinching a spot in the state playoffs for the first time since 1993.

Saturday night, the Vikings went to the Clip Joint, winning a road playoff game at Chester, a place the Clippers do not lose often.

Now they find themselves in a whole new experience, a road trip to the Liacouras Center for a semifinal battle with Bishop Shanahan.

“The outside perspective is that once you beat Chester no one is going to stop you,” head coach Jason Quenzer said.

“But in reality, Bishop Shanahan is a really solid team and we’ve got our work cut out for us.”

After a season of missed opportunities, Upper Merion (14-11) is peaking just at the right time, with everyone seeming to finally gel together now that they have gotten games together as a full unit.

“Before districts we had barely any practices with the whole team together since the beginning of the season,” Quenzer said. “So having Matt back to help get into rhythm was important for us.”

When the Vikings step on the court, all eyes are drawn to Faw, a 6-foot-8 stretch forward that can score both in the post and from the perimeter. He scored a crucial 23 points against Chester, including the four free throws to seal off the victory.

Also on the interior is fellow stretch forward Ethan Miller, a similar player to Faw in that he can score both inside and out, as well as rebound using his 6-foot-6 frame.

The Vikings also spread the floor with excellent shooters, including senior Andrew Persaud. Shifty point guard Aidan Newell runs the show for the Vikings, especially when he was weaving his way through the Chester press time and time again Saturday night.

Despite all of the offensive ability, it’s been the Vikings defense that has propelled them into the semifinals. First, they held Strath Haven to 45 points in the opening round, then held the Clippers to just 50 points in the state-clinching game.

“The past two games we’ve played really solid defense, and any time you keep Chester in the 50s it’s a sign you’re playing with real intensity,” Quenzer said.

Going up against a very balanced Bishop Shanahan team that can score both inside and out, the Vikings will have to limit the turnovers and slow the pace as much as possible.

The Eagles (19-7), who were runners-up in the Ches-Mont after losing to Coatesville, beat both Academy Park and West Chester Rustin in booking their ticket to the state playoffs.

In their last six games, the Eagles have yet to allow more than 43 points, and have allowed an average of just 35.2 points per game against in the month of February.

With a pair of impressive juniors on the front line, both Kevin Dodds (6-6) and Thomas Ford (6-4), the interior battle in this matchup should be fun to watch. Faw and Miller will have their hands full trying to establish interior scoring against the two Eagles big men.

On the exterior, all eyes turn to Eagles junior guard and floor general David Angelo, who along with senior Danny Browne provides most of the Eagles exterior scoring. He’s an excellent 3-point shooter, and provides quality service into the two Eagles big men.

With both teams playing their best basketball headed into this clash at Temple Wednesday, whichever team handles the occasion and controls the paint should come out on top, but don’t be surprised to see this battle between two defensive-minded teams in the 40s.

“Going to Chester and getting a win there is a great experience and that helps us get ready for Wednesday which is something none of us have ever experienced,” Quenzer said.

“Walking into the gym is going to be different, for us and for Shanahan, and whatever teams adjusts first will be better off.”