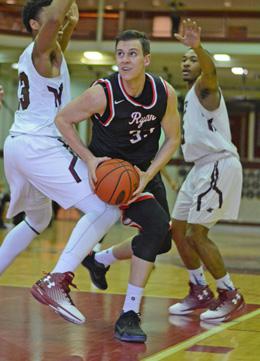 Matiss Kulackovskis (above) committed to Bowling Green on Friday, 12 days after they became the first school to offer. (Photo: Josh Verlin/CoBL)

When he told coaches in his hometown of Saldus, Latvia, that he wanted to become a Division I basketball player in America, Matiss Kulackovskis heard a lot of skepticism.

So much, that even he doubted whether or not a Division I scholarship was ever in his future, especially as his junior season at Archbishop Ryan HS in Northeast Philly turned into his senior year without so much as a Division II look.

“I told him, right when he got here, who he was and how good he could be,” Ryan head coach Joe Zeglinski said. “And you could see him lose confidence, as the year went on, if he had a bad game, if he had a bad start to the game.”
But the longer he stayed away from the negativity in Latvia, the more the 6-foot-7 teenager began to believe in himself. Which turned into confidence on the court as well as off of it, as he became a leader of the Raiders program over the last summer; when the season began, it was clear he’d stepped his game to the next level.

And on Friday afternoon, he committed to play Division I basketball, jumping on a scholarship extended two weeks ago by Bowling Green head coach Michael Huger. This fall, Kulackovskis will be a Falcon.

“To now say that I will play Division I basketball…” he said on a phone call Friday afternoon, trailing off for a moment.

“But that was my goal at the start, me and my dad [former Latvian professional basketball player Viktors Kulackovskis] made that goal that he wants me to play Division I basketball, go to school, go to University. And when I was in Latvia, a lot of coaches said it’s not going to happen, you’re too skinny, not enough athleticism in you, saying [I was] not fast enough, but I think I proved them wrong. So that was my goal, that was goal.”

Kulackovskis came to Northeast Philly from Saldus, a town of about 12,000 situated 20 miles north of the Latvia/Lithuania border. He lived with the family of his teammate Devon Vargas, while former teammate Austin Chabot and his family also, according to Zeglinski, “have been unbelievable helping Matiss get to where he is.”

Bowling Green first started recruiting Kulackovskis during the middle of the Catholic League season, with assistant coach Kevin Noon coming out to several Ryan games. Huger first came to Philly for the Raiders’ matchup with La Salle College HS on Feb. 12, after which the offer was extended.

Twelve days later, with other schools also starting to call around -- Northern Colorado and New Hampshire, among others -- he made his decision.

How much attention did BGSU’s staff show Kulackovskis in such a short amount of time?

Enough that he committed without visiting the school’s Ohio campus, his knowledge of the school and its team limited to online browsing and watching some video.

“The way they talked to me, they went out to my games three times a month and even the game on Wednesday when we played Wood [at the Palestra], they came from Ohio to look at me play, that just shows how much they want me,” Kulackovskis said. “They said they really need me and they would love to see me play at Bowling Green, so that was an easy decision, because none of the other schools paid me more attention than they did.”

Kulackovski’s commitment comes near the end of a senior season where he’s established himself as a co-star alongside NJIT commit Izaiah Brockington, forming a formidable 1-2 punch. He’s averaging 17.6 ppg this year for the Raiders, who take on Frankford next Thursday in a District 12 6A seeding game for the right to play in the PIAA state tournament.

A solid 3-point shooter who’s deadly with his feet set, he’s gotten much more aggressive off the bounce, taking advantage of mismatch opportunities whenever possible.

“When he first came in, I looked at his skillset and the way he can move at 6-7, the way he can shoot it, I thought he was a mid-major player,” said Zeglinski, who scored more than 2000 points during a standout career at Hartford from 2006-11. “It came out this year, he was more confident in himself and his skillset was able to show this year, I think it was more confidence and being the leader of a team this year show what he could do.”