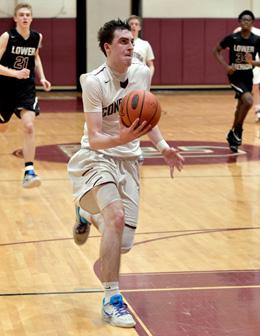 Charlie Martin (above) and Conestoga took the rubber match from Lower Merion to advance to the district quarterfinals. (Photo: Mark Jordan/CoBL)

After a loss to Strath Haven back on February 12 in the Central League semifinals, Conestoga was banged up.

Both mentally and physically, the Pioneers needed to regroup to get ready for the district playoffs, where they were ranked No. 7 in the new 6A classification.

While most teams would rue a 10 day break that would throw them off their two-game-a-week rhythm, the Pioneers got exactly what they needed.

Enough time to get center Angus Mayock healthy, to get over the loss to the Panthers, and to get ready for a rubber match with their rivals, Lower Merion.

Playing on nine days’ rest, Conestoga got back to playing Conestoga basketball, dismantling No. 10 Lower Merion 77-57 and clinching its ticket to the PIAA state playoffs for the fourth consecutive season.

“It was a great to have a week just to practice, we came in, we refocused, we went back to the fundamentals.”

“The past few years we lost in the Central League playoffs and let it fester,” senior wing Charlie Martin said. “This year, we didn’t want to let that happen.”

After the last two meetings between these two teams, both nail-biters down to the wire, many, including within the Pioneer locker room, were expecting another tight rivalry matchup.

Conestoga beat Lower Merion 72-69 in overtime back on December 20, with the Aces winning the rematch at Conestoga 58-56 on January 27. With both teams splitting the meetings in such dramatic fashion, this district playoff game felt more like another Central League battle.

“Both games were really close and I expected a close game, but I thought we played at a different level tonight,” Troy said.

“This rivalry has a lot of ebbs and flows,” Aces’ head coach Gregg Downer said. “Both teams are very dynamic offensively and tonight was their night, they outplayed us.”

When Lower Merion tried to full court press, the Pioneers beat it easily, thanks to stellar guard play across the board. They had just one turnover against the Aces’ press until the game was well decided.

“We knew they were going to come at us and pressure us, and we knew we had to turn the pressure into points,” Troy said.

When the Aces forced the Pioneers into the halfcourt, Conestoga was content to dump it inside to Mayock, who scored 17 points, on 8-of-10 shooting, with 14 of those 17 coming inside the paint.

Mayock, who had been dealing with an ankle injury for the past month, took advantage of the Aces’ lack of a true center, turning in one of his best performances of the season.

“I sprained my ankle about four weeks ago and haven’t been moving right since until about yesterday,” Mayock said. “I felt a lot better, and it showed tonight.”

No matter what the Aces tried, they could not contain the Pioneers balanced scoring attack.

With Martin, Scott Shapiro, and Milton Robinson all scoring both inside and out, and getting to the rim at will, the Pioneers offense was free flowing and at times, unstoppable.

Martin had a game high 25 points, Shapiro and Robinson each added 13 a piece.

Leading just 32-28 with 10 seconds left in the opening half, it was Shapiro who attacked the paint, drawing the foul and sinking the lay up headed into the half. It was only three points, but it sure felt like a whole lot more.

The momentum, which had been with the Aces in the final moments in the half, completely flipped.

Once Martin came out firing to start the second half, scoring eight points in the opening 84 seconds of the first, the lead had ballooned to 13.

The Aces never closed the gap within single digits again.

“We knew no lead was safe so we wanted to keep attacking and we found a play that worked and kept running it for easy baskets,” Martin said.

“We’ve been a really good second half team all year long, it’s kind of our thing,” Mayock added.

Tonight, the Pioneers were dominant in both halves.

They shot a steady 29-of-48 from the field, good for a 60% shooting percentage, including 7-of-13 (54%) from beyond the arc. Most of those 29 baskets were layups, generated by Conestoga’s fluid passing and ball movement.

“When you shoot 60 percent, what that really means is that you did a really good job passing and sharing the ball,” Troy said.

Lower Merion, who came up well short despite a 19-point showing from Terrell Jones, will host No. 18 Central Bucks East in an attempt to qualify for states via playbacks.

The impressive shooting display has booked Conestoga a spot in the 6A quarterfinals, where it will travel to Plymouth Whitemarsh to take on the Colonials, who are the defending district champions.

In other District 1 6A action….

Justin Jaworski led the way with 34 points as the Vikings survived a tough challenge from the Jaguars. Garnet Valley’s Brandon Starr sent it into the extra session with a 3-pointer with five seconds to spare, but Perk Valley’s senior star was too much to be contained, hitting four key foul shots as GV went scoreless in OT. Garnet Valley was paced by Starr with 23 points; junior Austin Laughlin chipped in 17 for the Jaguars.

No. 2 Plymouth-Whitemarsh 62, No. 18 Central Bucks East 43
After leading just 8-7 following the first quarter, P-W used a balanced scoring attack to blow the gates open and make its way back to the district quarterfinals for the third season in a row. Ish Horn and Ahmad Williams led the way with 19 and 12, respectively, while Kareem Breeden (10) and 7-footer Naheem McLeod (8) chipped in with solid showings as well.

Clifton Moore got the Hatters off to a quick start with nine points and five rebounds in the opening quarter, but the Knights slowly took control of the game to book their spot in the state playoffs. Thanks to a 17-9 third quarter, the Knights were able to pull away from the Hatters, keeping the game just out of reach in the fourth. Senior forward and Merrimack commit David Giuliani had 13 points and 13 rebounds, while his classmate Reece Udinksi added 12 points in the Knights win.

The only upset of the night belongs to the Patriots, who made the long trip up from Lansdowne to Fairless Hills to knock off the Falcons. Penn Wood outscored Pennsbury 22-16 in the second quarter before a 13-0 third quarter run helped them secure the upset. Shariff Goff led the Patriots with 18 points while Javon Lindsey-Terrell added 15. St. Francis (Pa.) commit Mark Flagg scored 22 points for the Falcons.