The 16 teams left in the District 1 6A bracket all have something in common: one win on Tuesday means a berth in the PIAA Class 6A state tournament, not to mention a spot in the district quarterfinals.

Eight teams will lock up berths tomorrow night, while the losing eight go into a play-back bracket, whose two final teams also qualify for the state tournament.

Here’s a look at each of the eight games taking place on Tuesday night (all games 7 PM at higher seed unless otherwise noted):

1) Perkiomen Valley vs. 16) Garnet Valley
This could be one of the more fun shootouts of the second round, as the two “Valleys” both love the 3-point shot, and both hit at a reliable pace with the ability to absolutely catch fire for stretches. Both are having season-to-remember type years, as well: Perkiomen Valley (21-3) won the most games in school history and captured the Pioneer Athletic Conference championship; Garnet Valley (15-8) won its first district playoff game since its transition from small-school to the Central League in 2008 (and well before that). Both teams are looking for their first-ever state playoff berth, and it’s likely going to come down to whoever’s feeling it from deep.

Each team is led by a dominant scoring guard with a very capable partner in crime. For the Vikings, it’s senior guard Justin Jaworski, the two-sport star who’s the shoe-in for PAC Player of the Year. The 6-1 dynamo is an outstanding 3-pointer shooter and rebounder from the guard position who can also get into the lane and make things happen; Sean Owens, a tough 5-10 scoring combo, fits in perfectly as well in Mike Poysden’s constant-motion offense. The Jaguars are paced by junior Austin Laughlin and senior Brandon Starr, who average slightly above and slightly below 20 ppg, respectively. In the first-round win over Methacton, GV got a nice boost from junior guard Connor O’Brien, who knocked down four 3s (including a half-court buzzer-beater at halftime) and dished out seven assists in the 49-45 win. 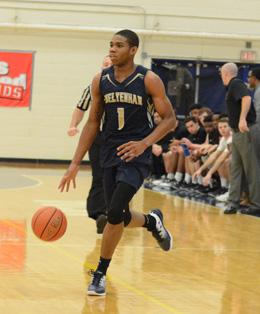 Trevonn Pitts (above) routinely goes for 20-and-10 for Cheltenham, in search of its first state bid in over a decade. (Photo: Josh Verlin/CoBL)

8) Cheltenham vs. 9) Spring-Ford
Last year, Cheltenham, the No. 13 seed in the old AAAA bracket, was upset by No. 20 Perkiomen Valley in the first round, ending the postseason run of what had been the Panthers’ best team in quite some time before it even got started. But now John Timms has his group back and playing well down the stretch, winning 11 of their last 13 games heading into the district tournament, in search of the team's first state bid since 2006. Senior Trevonn Pitts, a physical 6-3 wing, leads the way for for Cheltenham, which also routinely gets double-figure contributions from 5-10 junior point guard Ahmad Bickley and intriguing 6-5 junior Jack Clark, who’s starting to get some D-I interest.

The Rams come into this game off a five-point win over Avon Grove, as they look to clinch their third PIAA state playoff appearance in four years under head coach Chris Talley. Led by a balanced scoring attack, featuring sharpshooting guards Ryan Fitzpatrick (11.1 ppg), Chucky Drummond (9.8 ppg) and Nestor Diaz (8.9), the Rams love to get out and run the open floor. When they do slow it down, they have two solid interior presences, both junior Austin Hokanson (10.9 ppg) and sophomore Noah Baker (8.3). With both teams loving to run the floor, this matchup between two potent offenses should be a high scoring affair.

4) Coatesville vs. 13) Downingtown West
For any Ches-Mont fans, the idea of Coatesville playing Downingtown West with a state tournament bid on the line certainly rings a bell. The two rivals separated by just a few miles of route 30 competed in a similar position back in the 2015 district playback bracket, with the Whippets prevailing in double overtime behind clutch plays by current Penn guard Ryan Betley and West Chester wing Dom Guerrera. Most of the players who saw the court in that game, other than two – West 6-foot-7 forward George Gordon for West and senior forward Tyrel Bladen for Coatesville – are no longer around, but this rivalry certainly should provide some fireworks.

Gordon leads the attack for a Downingtown West team that has won eight of its last nine since starting 7-7 and hasn’t lost since it played Coatesville on Jan. 26. The 6-foot-7 Ursinus commit had a game-high 22 in his team’s 69-64 first-round defeat of No. 20 Pennridge Friday. Fellow senior Matt Carson, an athletic 6-foot-4 wing, also contributed 15 points in the victory. As for the recently-christened Ches-Mont champion Red Raiders, Chuck Moore’s team is powered by a pair of cousins: senior Kamau Brickus, a poised floor general, and freshman Jhamir Brickus, a prolific scorer. Coatesville swept the home-and-home season series, winning both meetings by double digits. 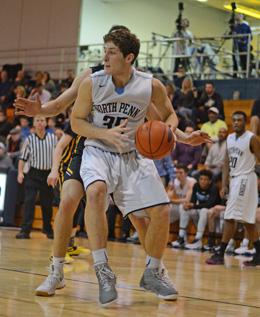 David Giuliani (above) is part of a tough North Penn group with size throughout the roster. (Photo: Josh Verlin/CoBL)

5) North Penn vs. 21) Hatboro-Horsham
For the second time in four days, Indiana commit Clifton Moore and Hatboro-Horsham will have to travel to a Suburban One Continental opponent to stay in the hunt for a district title, after beating No. 12 Central Bucks West in double overtime on Friday. But North Penn, the outright SOL-Continental regular-season champions for the first time since joining the conference in 2008-09, is a deeper, more experienced and more athletic bunch that’s certainly got a chance to make a dark horse run all the way to the district championship.

John Conrad’s Knights are led by senior forward David Giuliani, a hard-working 6-5 forward bound for D-II Merrimack in the fall. He’s not the only player on the roster with good size and athleticism; fellow seniors Reece Udinski (6-5), Derek Heiserman (6-5), Ricky Johns (6-4) and Noah Kwortnik (6-4) are all significant contributors, especially Udinski and Johns, bound for Division I football programs in VMI and West Virginia, respectively. If that group can slow down the Hatters’ potent duo of the 6-9 Moore and 6-3 Jay Davis -- the two can each go for 20+ with ease -- they’ll be moving on to the quarterfinals.

2) Plymouth-Whitemarsh vs. 18) Central Bucks East
This is the time of year that Plymouth-Whitemarsh lives for. Head coach Jim Donofrio sees the regular season as nothing but a tune-up for February and March, where his Colonials have taken home numerous district and state titles -- most recently last year, when current Rider freshman Xzavier Malone led P-W to the District 1 AAAA title and a berth in the state semifinals before its season was finally ended by Roman Catholic. Just like last year, they’re the No. 2 seed in the district, though it’s a largely different cast of characters that’s led the way.

Central Bucks East pulled some big upsets last year, knocking off No. 1 Coatesville in the second round to secure a state berth after beating No. 17 Pennsbury in the first round. This time around Erik Henrysen’s bunch pulled off a road win at Council Rock South in the first round, getting 15 points from Kyle Cassidy in the fourth quarter and a pair of overtimes to pull off the 39-36 win, and now again have a chance to knock off one of the favorites. The Patriots will have to slow things down and hit shots, led by senior Matt Pattyson, a 6-2 scoring combo guard. They’ll have to find a way to navigate around P-W’s ace in the hole, 7-foot sophomore Naheem McLeod, a rapidly-improving double-double threat who erases anything most teams can come up with near the hoop. Though the Colonials are without junior guard Ahmin Williams (foot), their press is still very dangerous with Ahmad Williams, Ish Horn and Cheo Houston bringing a lot of energy to the backcourt and scoring ability on the perimeter.

7) Conestoga vs. 10) Lower Merion (6 PM)
It’s a Central League showdown with a state tournament bid on the line in Berwyn, as the Pioneers host the Aces for the third meeting this year between the two programs. The first two have been as close as could be, with both teams beating the other on the road: Conestoga dealt LM a 72-69 defeat in December, with LM returning the favor 58-56 in late January. It’s also a battle of two of the more experienced and successful coaches in the region: Lower Merion’s Gregg Downer picked up his 500th win last season, and Conestoga’s Mike Troy won his 300th in January. This is a chess match of a game, and both coaches have some intriguing pieces at their disposal.

The league champions, Lower Merion (18-7) is split between veteran experience and exciting youth. The Aces are led by seniors Terrell Jones and Noah Fennell, but it’s the sophomore class that has the immediate future of the program looking so bright: 6-4 wing Jack Forrest, 6-0 guard Stephen Payne and 5-11 wing Darryl Taylor all start for Downer, and the trio combined for 58 points in the Aces’ Central League title game win over Strath Haven; Jones, a 6-4 wing with Division II looks, plays all five positions for the team and is a stat-sheet stuffer. Conestoga is more senior-laden with 6-4 wing Charlie Martin, 6-0 guard Scott Shapiro and 6-4 forward Angus Mayock, but they also rely on a talented sophomore: 6-1 point guard Zach Lezanic, a talented ball-handler and outside shooter who will take the reigns of the program next year. 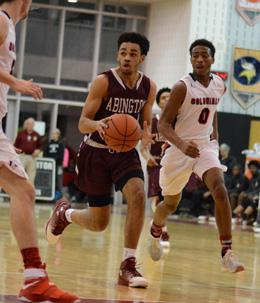 Robbie Heath (above) and Abington are coming off their second Suburban One championship in three years. (Photo: Josh Verlin/CoBL)

3) Abington vs. 19) Norristown
Norristown may be flying high headed into the second round of the playoffs off a 51-43 upset win over Downingtown East, but they have a daunting challenge in front of them Tuesday night to try to clinch a state playoff spot. The Eagles are led by senior Kurahn Clark (12.7 ppg) and sophomore Xavier Edwards (10.6), who have stepped up in a big way for the Eagles in both a PAC playoff win and Friday’s district win. 6-foot-4 big man Marquise Greenwood will have his hands full with Abington Division I prospect, 6-8, 250-pound forward Eric Dixon. The Eagles don’t like to go deep into the bench, so they’ll have to stay out of foul trouble, which cost them in a PAC semifinal defeat to Perk Valley.

The Ghosts may be the No. 3 seed, but they are fresh off a Suburban One League title win over No. 2 Plymouth Whitemarsh. Charles Grasty’s team has won 13 of its last 14 games, the only loss coming to Cheltenham back on January 26. The Ghosts are led by Dixon, and their ‘Wonder from Down Under’, versatile junior guard Robbie Heath. Joining Heath in the backcourt are talented sophomore Lucas Monroe, a 6-5 point guard, and 6-0 senior Rob Young, who brings leadership and steadiness on both ends. The Eagles will provide a tough test for Abington, but the Ghosts certainly have the edge in talent and size across the board.

6) Pennsbury vs. 11) Penn Wood
Penn Wood nearly got upset in its own gym by No. 22 Neshaminy, but a late run from Matt Lindeman’s Patriots earned them a trip up to Fairless Hills to take on a physically imposing Pennsbury squad. Bill Coleman’s Falcons feature one of the district’s handful of Division I commits, 6-8 forward Mark Flagg, a stretch-’4’ who should also be able to take advantage inside of a Penn Wood team that doesn’t start anybody over 6-3. Flagg and fellow seniors Billy Warren (6-7) and Joey Monaghan (6-4) are a scrappy group who can all score inside; on the perimeter, Coleman relies heavily on seniors Tyler Sessa-Reaves and Addison Howard, though junior Raylil Winton-Law has come on the second half of the season as he saw increased minutes due to injuries.

The Falcons aren’t the only team that’s upperclassman-filled. The Patriots start five of the 10 seniors who are on the roster, and they won the Del-Val League for a reason. They’ve got scoring options from all over the court in 6-4 wing Vincent Smalls, 6-4 wing Pernell Ghee, 5-11 point guard Kairi Jones and 5-11 shooting guard Jay Fitzgerald, plus 6-4 Rashaad Anderson and 6-1 Javon Lindsey-Terrell. If Penn Wood can get the game going in the open court and force Pennsbury to play from behind, this could very well go the visitors’ way.