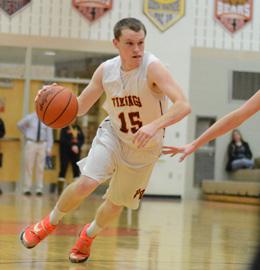 Sean Owens (above, vs. Neshaminy) and Justin Jaworski were nearly perfect from the foul line. (Photo: Josh Verlin/CoBL

If there’s one place on the basketball court where games are won and lost, seasons are ended or extended, and championships are decided, it’s the line just 15 feet from the basket.

And the way Perkiomen Valley seniors Justin Jaworski and Sean Owens shoot free throws, the Vikings are in good shape.

Jaworski missed his first free throw, then made 15 in a row from the charity stripe on Friday night to propel his team to a 60-43 win over Norristown in the Pioneer Athletic Conference semifinals.

“They’re free, so you’ve got to make them,” Jaworski said.

“We practice being strong with the basketball and we walk to the free-throw line with confidence,” Perk Valley head coach Mike Poysden said.

Playing at Norristown in a chaotic atmosphere, Jaworski and the Vikings were able to close out the game and advance to the championship game for the second straight year thanks to impeccable free throw shooting.

“We shoot so many free throws at practice, we know we have to go to the line confident,” Jaworski said. “Sean and I stay after practice to shoot them.”

Like so many other games this season, the Vikings back court carried them to victory. With the officials calling the game tight, Perk Valley took full advantage, getting into the bonus midway through the third quarter.

At that point, leading by just four points, the Vikings were in a dogfight in a hostile environment.

But as the Eagles starters ran into foul trouble, with big man Marquise Greenwood (12 points, nine rebounds), leading scorer Xavier Edwards, and Tuesday’s hero Mickeel Allen all in trouble, the Vikings put together a big fourth quarter to pull away.

Jaworski finished with 31 points, on 7-of-14 shooting, 20 of which came in the 4th quarter alone. Owens also chipped in to the scoring attack, pouring in 14 points, while helping direct the offense from his point guard role.

Norristown battled with the #1 ranked team in District 1 6A for three full quarters, before the foul trouble eventually got the best of them.

“Ever since we started our winning streak early in the season, we’ve been getting everyone’s best shot,” Poysden said.

Perk Valley threw a couple of different looks at the Eagles on the defensive end, switching back and forth from a 2-3 zone and man-to-man, attempting to force the Eagles into taking outside shots.

For most of the first half, Norristown was hitting those outside shots, and found themselves down just 29-25 at the break.

A team that relies heavily on attacking the paint, the Eagles knocked down multiple mid range jumpers and three 3s, forcing the Vikings out of their zone and into a man-to-man for parts of the first half.

“That’s always the danger in playing zone,” Poysden said. “If they start making threes you have to think about whether or not to come out of it. We decided to stick with the program.”

Eventually, the shots stopped falling for the Eagles.

And Perk Valley put together a dominant fourth quarter, outscoring Norristown 21-10 to set up Tuesday’s rematch with Spring-Ford.

This time around, they’ll be hoping for a different result.

“You can’t ask for anything more than to get a rematch with them,” he admitted. “If you’re not excited to play in a championship game then you’re not a competitor.”

Despite the winningest regular season in school history, Perk Valley isn’t satisfied. Ever since February 9th, 2016, the Vikings have wanted revenge on Spring-Ford.

Tuesday, they can get it.

“20 wins doesn’t mean anything Tuesday,” Jaworski said. “Both teams are playing for one game, and the basketball gods gave us Spring-Ford, and I’m excited for it.”

“It will be a great high school basketball game, that’s what you play for,” Poysden said.