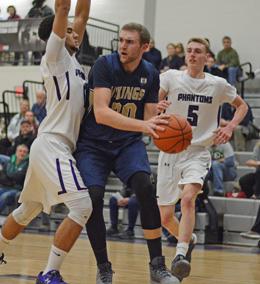 Ethan Miller (above) and Upper Merion are in their first year in the Pioneer Athletic Conference. (Photo: Josh Verlin/CoBL)

If the opening round of the PAC playoffs on Tuesday was a foreshadowing of things to come, then Friday night promises to be even better.

On Tuesday, Norristown (9-5) came from 10 points down in the fourth quarter to defeat Methacton in overtime, earning them the final spot in the semifinals, on home court. Joining the Eagles are Perkiomen Valley (11-2), Spring-Ford (11-2), and Upper Merion (9-4), in what promises to be a packed crowd and electric environment for the league's biggest night.

The opening game of Friday’s doubleheader features two teams that met once in the regular season, with Spring-Ford holding on late for a 46-43 win in a hard fought defensive battle. The story of the night is most certainly Vikings’ forward Matt Faw, a 6-foot-8 Holy Cross commit, who is back after having missed the majority of the season with a foot injury. Faw played on Saturday in the team’s nail biting win over Pottsgrove, scoring 17 points in the Vikings division clinching win. Along with Faw, the Vikings will look to fellow big man Ethan Miller (13.8 ppg) and sharpshooter Andrew Persaud (44 threes) to provide additional scoring.

Spring-Ford enters on a 3-game winning streak themselves, looking to defend the title they won last year in dramatic fashion. They have a very balanced offensive attack, with no one averaging more than 12 points a game, but five players averaging eight points a game or more. Led by do-it-all point guard Ryan Fitzpatrick, and talented scorer Chucky Drummond off the bench, the Rams will try to get out and run the floor as much as possible to combat the size advantage the Vikings have inside.

Both teams have struggled recently with turnovers, so this one will come down to whichever team takes care of the ball best. Also, this is the Vikings first final four situation, being new to the league this season, where as Spring-Ford has been in the PAC playoffs three of the last four seasons.

With Faw back for the Vikings, their size will frustrate Spring-Ford, and Upper Merion wins in a close one. 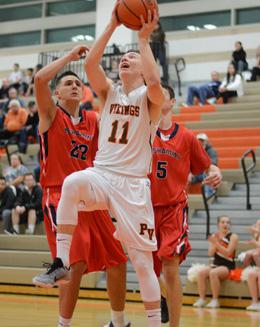 Justin Jaworski (above) leads a selfless Perkiomen Valley squad in as the No. 1 seed. (Photo: Josh Verlin/CoBL)

Despite being the number one overall seed in the league, and number one in the district rankings, the Vikings find themselves in hostile territory at Norristown in the second game of the semifinal doubleheader.

The Eagles enter this one riding a wave of momentum, having crushed Boyertown to clinch a spot in the final five, then upsetting Methacton Tuesday in come from behind fashion. The Eagles are an athletic, tough bunch who will be playing in front of what promises to be an electric home crowd and student section. Norristown’s leading scorer is guard Xavier Edwards (10.8 ppg), who loves to attack the paint and distribute for others. Also, no player comes into this game more confident than Mickeel Allen, a sophomore wing who scored 14 points, grabbed 15 rebounds, and hit the game tying three Tuesday with a minute left. The Eagles will look to force as many turnovers as possible, and get out in transition in hopes to pull off the upset on home soil.

Perkiomen Valley has proven themselves to be a model of consistency this season. The Vikings boast an impressive 19-3 overall record, an 11-2 record in league play, and a 5-0 record vs the other three teams left in the playoff field. The Vikings won both regular season meetings, including a 59-48 win just last week at Norristown. Perk Valley is led by dynamic scorer Justin Jaworski, who is second in the PAC with 21 points per game. Outside of Jaworski, the balanced Vikings team has multiple three point shooters, including Sean Owens, Tyler Strechay, and Andrew Light. Big man Hogan Millheim may be undersized inside, but he rebounds as well as anyone in the league. The Vikings like to slow the pace, use ball control, and weave their way through the defense with smooth passing. It will be up to Norristown to try to turn over a team that takes care of the ball as well as the Vikings do.

Momentum is huge in high school basketball, and no team comes into the playoffs on a higher note than Norristown, and in front of their raucous crowd, the Eagles pull off the upset.