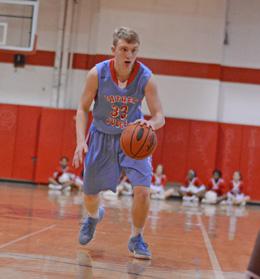 Alec Riley (above) came up clutch for Father Judge with a buzzer-beater in a win over Carroll. (Photo: Josh Verlin/CoBL)

Several weeks back, Father Judge coach Sean Tait brought a few certain players into his office at the school, where he also teaches social studies.

Not included were his seniors and leading scorers Marc Rodriguez, Mike Power and Matt O’Conner. Instead, Tait wanted to talk to his role players: starters junior Drew Riley and sophomore Shane Dooley, as well as a few underclassman reserves.

After Judge had begun Catholic League play with eye-opening wins over Archbishop Wood and St. Joseph’s Prep, the Crusaders hadn’t looked quite as steady in their next few games, and Tait knew his stars needed some support.

“I said ‘look guys, in those wins against (Wood and Prep), you did something special, you made a 3, stepped up, got a rebound,’” Tait said. “‘These last few games you’ve just stood around and watched Marc, Matt and Mike, and we need you to do a little extra.’”

“Since then, I think they got the message.”

It certainly seems that way.

In a crucial road game at Archbishop Carroll on Friday night, Judge’s role players stepped up in a big way -- none more so than Riley, whose put-back just ahead of the final buzzer delivered a thrilling 42-40 win for the Crusaders to keep the dream season rolling.

The teams traded leads all game long, but it was a tie game with 70 seconds remaining after Carroll sophomore Mark Bradshaw drove in for a left-handed layup. Judge ran the clock down to 25 seconds remaining before calling timeout, where Tait drew up an isolation play for Rodriguez, a 6-2 guard and the program’s first-ever 1,000-point scorer.

But Rodriguez got trapped in the corner with five seconds to play and threw up a prayer, which fell a foot or two short of the rim. Dooley grabbed the ball and went up for a layup, but his shot was blocked.

So it was Riley who ended up playing hero, grabbing the ball in front of the rim and putting it back up, the buzzer sounding as the ball bounced off the back of the rim and rolled around the front before finally dropping through the net.

DREW RILEY TIP IN AT THE BUZZER. JUDGE WINS 42-40. pic.twitter.com/7EQTK1MxAG

“Play broke down, Marc threw it up, Dooley got a good rebound and I was able to finish,” Riley said. “I had no clue [how much time was left], I just wanted to get it in.”

That’s nothing new for Riley, who routinely has to battle some of the best big men in the area as part of playing the Catholic League.

“Just have got to be tough and physical, try to maybe get a few offensive fouls my way,” he said, “but keep them off the glass, definitely.” 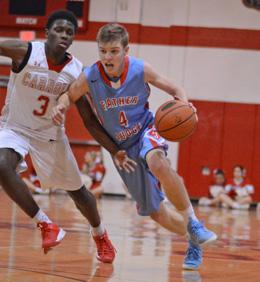 Mike Power (above) capped off a 14-point outing with a clutch 3-pointer in the fourth quarter. (Photo: Josh Verlin/CoBL)

Power led the way for the Crusaders with 14 points, including a crucial 3-pointer from right in front of his bench to put Judge up 40-38 with two minutes to play.

That came on a give-and-go with Riley, who had an open look from 14 feet but opted instead to kick to Power, who had drifted into the corner; the 5-10 senior guard’s second 3-pointer of the day was a clutch one.

“I saw my man running out and I thought the help would come,” Riley said. “I knew Mike hit a 3 earlier in the half so I wanted to give him another one.”

Rodriguez, the target of quite a few area Division II programs -- several of whom were on hand to watch him on this particular evening -- added eight points on an off night from the floor, but grabbed five rebounds and dished out two assists. Dooley scored nine points and grabbed six rebounds and two steals.

Archbishop Carroll was led by senior guard Colin Daly (11 points) and Bradshaw, who had a bucket in each quarter for eight points.

Against a team that features several Division I prospects, including junior guard Justin Anderson and freshman A.J. Hoggard, Judge limited Carroll to its lowest scoring output of the year and forced 14 turnovers.

“Underestimate us, we’ll come to your house and beat you,” Power said. “We’re not any big-time players -- maybe a couple of us -- but we’ve got guys who play hard, that’s how we win.”

Over the last few years, Tait’s teams have been competitive, winning at least five league games in each season since then, but haven’t been able to break through into the top half of the toughest conference in the state.

After Friday night, they sit in fourth place in the Catholic League, tied with St. Joe’s Prep. They’re two games behind the trio of leaders (Roman, Wood and Neumann-Goretti) and one game ahead of Bonner-Prendie and Archbishop Ryan.

“There’s not a lot of games left but a lot of different things could happen,” Tait said. “Any night we could lose to anybody in our league.”

Carroll (12-7, 4-6) sits in ninth spot, a game ahead of La Salle, which is currently in the 10th and final playoff position. The Patriots, who have dropped their last four league games, have road games at Lansdale Catholic and Conwell-Egan sandwiched around a visit from Bonner to close out the regular season.