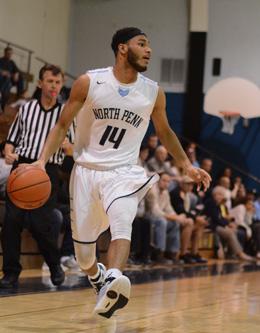 Ricky Johns (above) is one of two football stars who shine on the hardcourt for North Penn. (Photo: Josh Verlin/CoBL)

Over the last two years, Reece Udinski and Ricky Johns have become very close. After all, they don’t have to go far to work on their games.

Whether it’s on the court, on the field, or in the park near their neighboring houses, the North Penn seniors have built a special bond.

That bond was on display Wednesday night, when the Knights put together a huge fourth quarter to pull away from Upper Merion en route to a 53-39 win, on the back of 18 combined points from the pair.

“I would consider us best friends,” Udinski said. “We live right next to each other, so of course that helps -- we practically live the same life.”

Udinski, a quarterback who is headed to the Virginia Military Institute to play football next year, moved to the North Penn School District from Central Bucks West as an incoming junior.

Ever since moving right next door to Johns, a wide receiver and safety headed to West Virginia, the two have hit it off. With both of them loving basketball and football, it’s easy to see why the two consider one another best friends.

“We do everything together,” Udinski said. “We drive to school together every day, we practice basketball together, and we play football together.”

As a senior, Udinski broke the single season District 1 passing record, throwing for 4,119 yards, surpassing the previous record of 3,300 set by Downingtown East’s Pat Devlin back in 2005. The Knights were 14-0, before eventually losing in the 6A state semifinals to St. Joe’s Prep.

Johns had the seventh-most receiving yards in Pennsylvania in 2016, finishing with 1,317 yards.

After receiving Division I football scholarships, and leading the Knights to their first District 1 football title since 2011, Johns and Udinski turned their attention to their number two sport, basketball.

“We’ve both achieved our goals in football and we wanted to carry that success onto basketball,” Udinski said.

No matter what sport they are playing together, the connection is undeniable.

The on-court connection between the two of them, developed through spending hours and hours together every day, has North Penn (14-4, 7-1 SOL) alone atop the Suburban One Continental division.

“The connection we have from the field to the court is special and it’s huge for our team both in football and basketball,” Johns said.

During the fourth quarter, it was Udinksi who found Johns wide open in transition for an easy lay-up, to help the Knights hold off Upper Merion in enemy territory.

Johns finished with 10 points, six of them coming in the second half, as his quarterback went 6-of-6 from the line to help ensure the victory.

After a slow paced first half where both teams struggled to score, and the Vikings slowed the game to a crawl, the North Penn athleticism eventually proved the difference. The Knights forced the Vikings into contested shots and turnovers, allowing them to score in transition time and time again.

“We didn’t have the tempo where we wanted it in the first half, we played on our heels, not our toes,” North Penn head coach John Conrad said.

Despite trailing 18-15 at the half, the Knights never trailed by more than six, and a quick 10-2 run gave North Penn the lead 30-29 after three quarters. That run led to a dominant 23-10 fourth quarter, where North Penn found it much easier to generate offense.

Tied at 35 with 3:40 to play, it was A.J. Mitchell who came off the bench after missing time with a thumb injury, to hit two clutch threes in transition, descending the Vikings’ crowd into silence.

“We don’t shoot a lot of threes, that was a ‘no, no, yes’ shot,” Conrad admitted. “We just turned them loose and let them play and A.J. was feeling it in that moment and hit two huge shots.”

Mitchell led all scorers with 15 points in the win, 11 of them coming in the dominant fourth quarter.

Upper Merion, still without big man and Holy Cross commit Matt Faw, could not find scoring outside of versatile senior Ethan Miller, who had 22 points on 8-of-13 shooting and 9 rebounds in defeat.

The shots just we’re not falling for the Vikings, who shot just 7-of-31 excluding Miller.

North Penn has now won four straight, and eight of their last nine, with just four SOL games remaining until the league and district playoffs.

With Udinski and Johns focused on delivering another district championship for North Penn, the two make sure not to forget about their own rivalry.

“There’s a park near our houses where we play against each other all the time, and I know he would disagree, but I know I would win,” Udinski said.