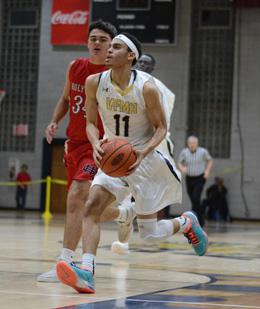 As the final seconds of the third quarter ticked down, the Valley Forge student section let out a three-word chant about the Trojans’ basketball team, though it was undoubtedly a phrase Holy Ghost Prep didn’t need to hear out loud.

“We got better,” rang across the Price Sports Center.

Boy, did they ever.

When Prep beat Valley Forge in December, the Firebirds limited the Trojans to just 29 points for the entire game, one played in Prep’s cozy gym in Northeast Philly.

In the rematch, Valley Forge had that midway through the second quarter.

The Trojans had one of their best offensive outings of the season, hitting 10 3-pointers in the first three quarters alone en route to a 64-41 win.

Senior guard Myles Bunyon and junior guard Arion Lewis had 17 apiece for Valley Forge (13-4, 9-2), which moved a half-game ahead of Holy Ghost Prep (11-4, 8-2) for first place in the Bicentennial Athletic League’s Independence Division.

“I think we learned our lesson against them the first time,” head coach Francis Bowe said. “Did I envision this type of shooting? God no.”

“We played to their style of play [last time], we were slowing the ball down,” said Bunyon, a 5-10 senior guard. “This time we just came out, wanted to push the ball and get easy buckets.”

Valley Forge took a 12-7 lead into the second quarter, where things started to get out of hand.

With Lewis (five steals, four assists) slashing through the Holy Ghost defense, the Trojans’ shots started falling, with Bunyon and sophomore Rye Ahronson knocking down shots to push the advantage into double-digits early in the period. Lewis then started to look for his own shot, knocking down all four of his field goal attempts for nine points in the second quarter alone, and the lead continued to expand and expand.

“We ran a set and Arion just pulled it, and it went right in, and it was one of those ones you’re going ‘let’s run the offen -- you know what, that’s a good shot,’” Bowe said. “It was awesome, when that went in I turned to my staff and said ‘here we go, let’s see where it takes us.”

It was a 35-12 lead by halftime as the Trojans hit five triples in a 23-5 second quarter, and the margin stayed a few points over 20 for the vast majority of the second half.

The regular varsity contributors were on the bench by the midway point of the fourth, though the outcome was in hand well before that.

Holy Ghost was led by senior Joe Calvin, who came off the bench to provide a dozen points, working his way inside against Valley Forge's 6-10 junior Abe Deng (5 points, 13 rebounds).

The Firebirds' bench scored 24 of its 41 points. 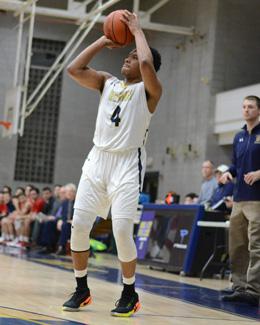 Devin Hill (above) had eight points in his fourth game back from an offseason ACL injury. (Photo: Josh Verlin/CoBL)

Though his presence certainly didn’t account for the 35-point increase on its own, Valley Forge certainly benefited from having senior guard Devin Hill on the court.

A 6-3 guard, Hill spent most of the offseason with his availability in doubt after he tore his ACL during an AAU tournament in July. But he began to get his hopes up after beginning to run in November, and he was cleared for action right after the New Year.

“(The doctor) told me that it was a slight chance [of playing], but he said it’s basically up to me -- if I fight through rehab, and fight through the mindset of not playing, just tell myself that I’ll be back, that you will be back,” he said. “Once I started physical training and my running program, I realized it’s up to me.”

Monday night’s win was just his fourth game of the season and just his fourth in a Valley Forge uniform, as he was previously at Delco Christian. But he looks like he’s fitting in well with his new teammates, deferring to the hot Bunyon and Lewis in the second half after getting his squad going early on.

“To bounce back so quickly, he had to get back in shape and he has to jump in the middle of the season and try to gel with these guys, he’s done a great job,” Bowe said. “The guys have openly welcomed him, he’s been on the sideline, being the biggest cheerleader, and I feel like we’re really finding our niche and the chemistry is getting there.”

Hill scored all eight of his points in the first quarter, including two 3-pointers during the opening few minutes to help his team out to a 10-2 lead.

“Right when we came out and Devin hit the first two 3s, I was like ‘alright, we’ve got some energy in us,’ we can go on a run and blow them out,” Bunyon said.

With Hill, Bunyon and Lewis on the perimeter and Deng in the middle, Valley Forge is very much in the mix for a BAL championship in just its third year in the league.

Over its previous two seasons, the Trojans pulled in a total of seven league wins, a number it’s already beaten by two this year alone. The next task was proving they could beat the teams that have usually won those championships, like Holy Ghost and Church Farm; Monday night was a step in that direction, though a 56-34 loss to Church Farm (10-5, 7-3) last week showed there’s still work to be done.

"We can’t have another let-down like we had a couple of games ago, but if we play to our ability and our confidence, we can play with anybody, absolutely anybody.”