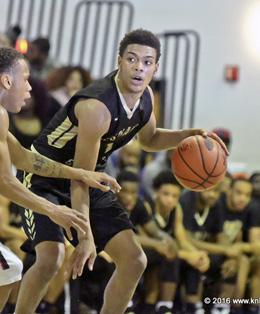 For the first time in a few years, the McDonald's All-American game will have some Philadelphia flavor.

Neumann-Goretti senior point guard Quade Green, a Kentucky commit and one of the top floor generals in the country, was one of four players with regional ties selected to the annual All-Star event.

Mohamed Bamba (Westtown School), Lonnie Walker (Reading) and Delaware native Trevon Duval (IMG Academy, Fl.) were also picked to the 40th edition of the national game, which will be played on March 29, 2017 at the United Center in Chicago.

Green, a 6-foot-tall point guard, is currently ranked No. 21 in the latest ESPN rankings for the Class of 2017. He chose Kentucky in November over dozens of other Division I offers, including finalists Syracuse, Villanova, Duke and Temple.

He's the first McDonald's All-American to come out of the famed Neumann-Goretti program in head coach Carl Arrigale's 19 seasons at the South Philadelphia institution.

"It's nice, I'm happy for him, he put a lot of work into it," Arrigale said. "He had a great summer and really took his game to another level, which as far as I'm concerned is McDonald's All-American worthy and it was proven to be tonight."

Bamba, a 6-11 center originally from New York City, has become one of the nation's best rim protectors. The versatile big man, currently No. 4 in the ESPN 2017 rankings, is down to Kentucky, Duke, Texas and Michigan.

He's also currently slotted as the No. 3 pick in the 2018 NBA Draft by DraftExpress.com.

"I'm so proud of how far Mo has come as a leader, teammate and player, but not surprised," Westtown coach Seth Berger said. "His commitment, intelligence, and ability are amazing. Being selected to the McDonald's All-American game is a great honor for him and the Westtown School."

Duval, a supremely talented 6-3 guard and the No. 5 prospect in the class, according to ESPN, is also undecided, with Duke, Kansas, Arizona, Baylor and Seton Hall all still in the running.

Walker, the pride of Reading, is the second player from the state's largest high school to be selected, following up on longtime NBA pro Donyell Marshall's selection in 1991. The 6-5 wing will play for head coach Jim Larranaga at Miami (Fl.) in the fall.

"It's well-deserved, he's always done the right things, he's made the right choices, and he deserves it," Reading coach Rick Perez said. "The McDonald's All-American game is one of the highest honors, and he's blessed to be part of the game with so many greats. Just sitting here in shock right now, very proud of him."