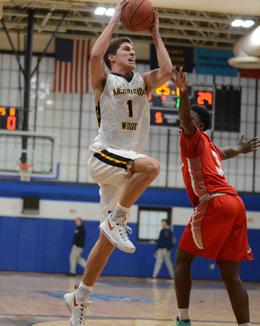 Just a few short months ago, Collin Gillespie was the most sought-after Division II recruit in the region.

Instead, he’ll play his college basketball at one of the top Division I programs in the country.

The Archbishop Wood senior guard saw his recruiting stock skyrocket over the course of the fall and winter, and ended the steep ascent on Saturday night when he called up Villanova head coach Jay Wright and accepted a scholarship offer from the defending national champions.

“It was always my goal, as a kid, but I never really thought it was going to happen like this,” he said. “I just was playing just to play, and then see what would happen as I was playing and we went along. But I was excited when all of these schools started reaching out, and when I talked to Coach Wright and their staff and their players, it just felt right.”

A 6-foot-2, 180-pound guard, Gillespie has been one of the city’s best players over the high school season’s opening months, averaging 22.6 ppg, six rebounds and 5.5 assists for an Archbishop Wood squad that’s expected to compete for the Philadelphia Catholic League championship.

In just his second year as a big-time varsity contributor, he’s shown the ability to play both guard positions, with a terrific outside shot as well as ability to score off the bounce, create for his teammates and play tough defense against some of the best guards around.

Now he’ll get the chance to show he can do it at the highest level of college hoops.

It’s been a meteoric rise that few people, if anybody, saw coming.

A two-sport athlete for the first two years of his high school career, Gillespie gave up football after his sophomore year to focus on basketball as his primary sport.

“It definitely gave me more time in the summer to work out and during the season because it ran into the basketball season,” he said. “It was the better decision and I had to do it.”

He was solid as a junior, averaging about 11 ppg, but it wasn’t until after the 2015-16 season that the light really started to come on about how good he could be.

Gillespie missed out on a key recruiting period during the offseason, however, spending most of July sidelined with knee/ankle injuries. Several D-I programs, including Albany, Fairleigh Dickinson and Maine, had offered by the end of the summer anyways, but those spots were taken by other commitments.

Heading into his senior season, Gillespie was being heavily recruited by the likes of Holy Family and Philadelphia University, among others in the NCAA’s second division.

But once he took the court with his Wood teammates for the regular season, it became clear that he was playing at a different level entirely, and Division I programs took note. Drexel, Hofstra and Delaware all offered in the previous month, and other high-level schools were getting involved: Virginia, Notre Dame and Stanford had all contacted Gillespie or Mosco in the recent days and weeks.

“It’s been crazy, actually, just going from Division II last summer to CAA schools and then Villanova and all the other big-time schools,” he said. “It’s just been crazy the past couple of months.”

“I definitely play with a different confidence,” Gillespie said. “I was really looking to get my teammates involved and score the ball, and I think it showed when we started winning games and beating really good teams out of conference. Just playing those teams helped a lot, getting that exposure, but shooting the ball, getting bigger and stronger, making the right play, just everything helped.”

Howard and fellow assistant Baker Dunleavey kept in contact, Gillespie said, and he went to watch Villanova’s win over Marquette last Saturday. It was on a visit to the school just two days ago, on Thursday, that Wright offered the scholarship.

“It was exciting, obviously, because it’s Villanova,” Gillespie said. “But I was just excited and relieved.”

Mosco, who spent more than a decade as an assistant coach at Neumann-Goretti before taking over the Wood program in 2013, had seen plenty of future high-major players come up through the Saints program. But it wasn’t until just before the season that he realized that Gillespie could join that group.

“In open gyms I saw him do some things that I used to see being done at Neumann, with those type of players,” Mosco said. “I thought he could play on the right team, the right coach, the right coaching staff and a team that’s going to work with them and get their guards better, which Villanova is. He was very fortunate and lucky they came calling.”