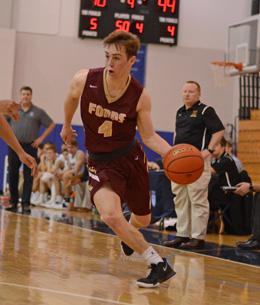 Gavin Burke (above) had nine points and five assists to help Haverford past Episcopal on Tuesday afternoon. (Photo: Josh Verlin/CoBL)

After watching him spend most of his freshman year shooting predominantly threes, most people see Haverford guard Gavin Burke as purely a spot-up shooter.

They would be wrong.

It has not come easy for the 5-foot-10 point guard, but Burke has developed into an excellent two-way player. And against Episcopal Academy on Tuesday afternoon, his development over the last year was on full display.

Burke scored nine points, and added an even more crucial five assists -- and some tough defense as well -- in the Fords’ 54-51 win over the Churchmen.

“He’s got about 35 games under his belt he’s a smart basketball player, so he picks up on what you show him very quickly,” Haverford head coach Bernie Rogers said.

During his freshman year, the sharpshooter made 61 shots, with 35 of them coming from beyond the arc. The difference this year has been his ability to get to the rim, where he scored six of his nine points on the afternoon.

“I spent a lot of time in the gym trying to get stronger and better,” Burke said. “A lot of teams see me as just a shooter and chase me from the line but I can drive the rim.”

The speedy guard was effective at both ends of the court, never more than in the third quarter, when he went on an individual six point run to keep Episcopal out of reach.

Defensively, the sophomore brought a ton of energy, and applied excellent on-ball pressure along with defensive tenacity in going to the ground to rescue possessions.

Burke even spent some time guarding Episcopal star guard Connor Delaney, who scored 21 points to lead all scorers in the loss.

Then, in the fourth quarter, just as Episcopal had cut it to four, Burke beat his man off the dribble and made a beautiful cross court pass, finding teammate Kharon Randolph for an open three.

“We practice our drive and kicks a lot in practice and they always assume when I’m driving to spot up and look for the ball,” Burke said.

Every time the Churchmen went on a run to cut into the Fords’ lead, Haverford found themselves on the foul line, or getting an important basket from Randolph or sophomore wing Christian Ray to preserve the win in a game they never trailed.

With Randolph and Ray scoring in double figures consistently for the Fords, including 20 and 17 respectively Tuesday, it’s up to Burke and fellow sophomore Jameer Nelson Jr. to step up and provide the scoring.

When Burke saw who he was matched up with early on in the game, he saw his opportunity to be the third scorer that his team desperately needs.

“I saw that some of the kids covering me couldn’t match my speed and that I could get to the basket,” Burke said.

“He’s a threat to score, he doesn’t take bad shots, he gets loose balls,” Rogers said. “He does so many things to help your team win.”

Now at 2-0 in the Inter-Ac, Haverford is off to a great start in league play. With Randolph and Ray in the lineup, the Fords will be a tough out.

A team without any seniors, the Fords showed on Tuesday they have the experience to close out a tight game down the stretch.

Randolph was a crucial 6-for-6 in the fourth quarter from the free throw line. In the second half, the team shot a remarkable 9-of-12 (75 percent) from the field, showing poise in the biggest moments.

When Episcopal’s Jack O’Connell hit a three to cut the Haverford lead to just 50-49 with one minute left, the Fords could have folded.

Instead, Randolph hit two free throws, the Fords forced a contested three, and another pair of free throws by their leading scorer iced the game.

They might be a young team, but Ray knows what this current youth could mean for this year and next year.

But for the Fords to achieve this year’s goal, a league title, they’ll need a 3rd player to step up and consistently compliment their two leading scorers.

New and improved Gavin Burke proved on Tuesday that he can be that third scorer.