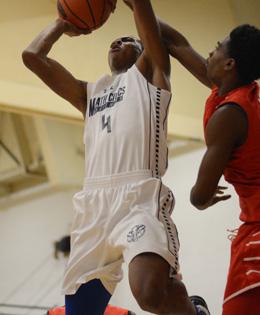 After Maqi Watson had a disappointing outing for his Math, Civics & Sciences squad in its first loss of the season to just before the New Year, the 6-foot-7 forward was determined to bounce back in a big way against Public League and state playoff rival Constitution.

Mighty Elephants head coach Dan Jackson told Watson he needed the senior to be more a display ornament in the lane: he needed to be a presence.

“Since my game last week against Reading when I had a real bad game, my focus coming into this game was like this is your game, you have to dominate,” Watson said.

Midway through the first quarter at Martin Luther King Rec Center, Watson set the tone with a two-handed pin block, an imposing play that helped turn the momentum in his team’s favor.

It was exactly the kind of play he was looking for.

“It doesn’t matter to me if I can block it off the backboard or deflect it out of bounds, I just like to get it,” Watson said.

Watson’s stuff got MCS going, and another big play finished it off as the Mighty Elephants outlasted Constitution for a 74-70 win in a packed gym on Thursday afternoon.

The ability for Watson, a 6-7 forward who previously had been at Parkway Center City, to fit in immediately on a team with extremely high aspirations has been crucial to MCS’ start. The win lifted the Elephants to 9-1 overall and 3-0 in Public League play, and they’re also the No. 1 team in Michael Bullock’s Class 2A state rankings.

Constitution has been No. 2.

Coming off a state championship appearance, the Mighty Elephants needed to replace Ed Croswell, the 6-7 junior who stuffed the middle last year and is now at St. Joe’s Prep. Watson isn’t quite as polished offensively, but he’s a more mobile shot-blocker and strong rebounder as well.

“We’ve been on (Watson) a lot because he’s been just in the lane but not really altering shots,” Jackson said. “Today he came out revved up and he got us going offensively because when he’s altering shots, blocking shots, it gets us going in transition, and we’re a guard-oriented team, which is good for us in transition.”

Though Watson’s block helped MCS to a 17-7 lead after one quarter and a 42-30 lead at the half, Constitution hung tough throughout the third quarter and tied things up at 60 with under four minutes to play.

Holding a two-point lead with two seconds left, MCS junior guard Kwazhere Ransom found senior Tymair Johnson behind the Constitution defense, hitting his teammate with a three-quarter-court pass that led to a game-sealing layup just before the buzzer.

“We wanted the home run pass,” Jackson said. “We said either get it to Malik [Archer] cutting to the basket, or throw it over and if he’s there, take it, and that’s what we wanted.” 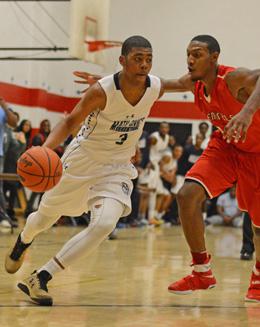 Malik Archer (above) had 29 points and eight rebounds to lead all scorers. (Photo: Josh Verlin/CoBL)

Though Watson chipped in more than admirably with 12 points and 13 rebounds, MCS (9-1, 3-0) was powered by 29 points from Archer, a 6-3 senior guard who also had eight boards of his own. Afterwards, both picked up offers from D-II Holy Family, whose head coach R.C. Kehoe and assistant Ryan Haigh were both in attendance.

Archer was spectacular offensively, shooting 7-for-10 from the floor (2-4 3PT) and 13-for-16 from the foul line. One of a few breakout stars on the Mighty Elephants squad that went all the way to the PIAA Class A state championship game a year ago -- taking out these Generals in the state semifinals along the way -- he’s now turned into a terrific all-around scorer, capable of taking his man off the bounce and getting to the line at a much higher clip than a year ago.

It wasn’t so easy, though, with his AAU coach (Basic Ball Philly’s Ron McGee) serving as an assistant coach on the Constitution bench this year.

“I just tried to do everything possible for him not to know what I’m going to do,” Archer said. “He knows everything I do, but I had to do something different today.”

Ransom, who developed a reputation for hitting key 3-pointers during MCS’ playoff run a year ago, connected on his one attempt from deep but did most of his damage attacking the rim, knocking down seven shots and picking up 19 points as the third member of his team in double figures.

Constitution had four players score between 10 and 14 points, led by 6-7 senior forward Maurice Waters, who also had nine boards and two blocks. Fellow senior Tamir Green added 13, including eight in the fourth quarter, but took quite a few shots to get there.

“Our gameplan was to deny the ball from Tamir Green, keep Maurice Waters off the boards,” Watson said. “I feel like starting off, we kept them down, slowed them down and everything. We took our foot of the pedal a little bit but at the end of the day we finished the job.”

Green had several big buckets in the fourth quarter, including a 3-point play with 3:38 left to tie it up. Archer responded with a bucket and two FTs to give MCS the lead back for good, and a Watson slam with just over a minute left made it 69-62 and sealed the game.

With the teams are bound to play each other once more in the regular season and almost yearly seem to meet in both the Public League and state playoffs, the first match-up of the year between Constitution and MCS is only the beginning.

“I just take it as a tune-up for what’s to come,” Jackson said. “There will probably be three more times this year that we’ll play Constitution, so it’ll be interesting.”