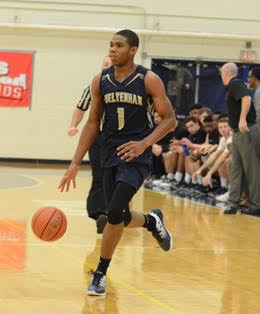 Cheltenham's Trevon Pitts was one of many standout players during Thursday's action at Widener. (Photo: Josh Verlin/CoBL)

Here are some standouts from Thursday’s action:

Izaiah Brockington (2017/Archbishop Ryan)
The NJIT commit played a two-way game, as he finished with 22 points and made several key defensive plays. On the offensive end, Brockington was able to consistently score from within the arc by either pulling up in the mid-range, or by driving to the basket. He also effectively utilized his size to finish through contact around the rim or to get some separation on his jump shots. He used his size well defensively too, fighting through defenders and getting his hands on passes. The senior was particularly great late in the game with his team trailing, as he led Ryan to a comeback victory. He had eight points in the final quarter, and also had a tremendous sequence with under three minutes to go when he scored on a long two, stole the subsequent inbounds pass and layed the ball up to bring Ryan to within three.

Luis Colon (2017/Atlantic City)
A muscular 6-1 guard, Colon led Atlantic City with 20 points in the Vikings’ 55-51 win over Episcopal Academy. Aggressive off the bounce, he was effective from all three levels, knocking down 7 of 13 shots, including a pair of 3-pointers. And when he got to the line, he knocked down four of his five attempts. He’s got a smooth release on his jump shot, even off the bounce, and played in control of himself the entire game. Used his physicality well on the defensive end as well, forcing several turnovers and getting in the mix for rebounds even though he only came up with two on this particular occasion.

Zach Crisler (2019/La Salle College HS)
Perhaps the prospect with the highest ceiling all day long is Crisler, a mobile 6-8 big man with a smooth athleticism to him. Though he’s still certainly a prospect, Crisler showed that he’s making strides, going for 14 points and 10 rebounds as La Salle overcame Carlisle, 73-66 in overtime. He was sometimes out-muscled by a more veteran Thundering Herd squad, but continued to fight for rebounds, coming up with a huge offensive board to help his team hit a game-tying 3-pointer late in regulation. Right now, Crisler still likes to step outside and shoot a little more often than his shooting percentage would indicate is best, but this is still only his first real year of varsity competition.

Ed Croswell (2018/St. Joseph’s Prep)
In The Prep’s 56-45 victory over Bishop Shanahan, Croswell was stellar in all facets of the game. With a team-high 18 points, as well as 10 rebounds and five blocks – several of which were of a very emphatic nature – Croswell earned his team’s MVP honors following the victory. Offensively, the 6-foot-6 junior scored in a variety of ways, most of which came around the rim or at the free throw line, but the highlight of his performance was a strong two-handed jam at the end of the third quarter to add to his team’s growing lead. Croswell, a recent transfer to St. Joe’s Prep from Math, Civics and Sciences, currently holds an offer from Nicholls State, but said Rider has also been expressing interest.

Conner Delaney (2017/Episcopal Academy)
In a losing effort against Atlantic City, Delaney proved he can score the basketball in pretty much every way possible, knocking down everything from floaters to driving finishes and even a  triple for good measure. Although both of his late game-tying attempts failed to find the bottom of the net, the senior bound for Johns Hopkins finished with a team-leading 23 points and made key plays down the stretch to keep the Atlantic City lead within a couple possessions. All in all, Delaney showed off his toughness and high motor in the way he paced his team, en route to MVP honors for Episcopal.

Robbie Heath (2018/Abington)
The leading scorer for the Galloping Ghosts with 17 points, Heath proved he can score in a variety of ways for his team. The 6-2 junior guard, originally from Australia, made multiple clutch shots from the perimeter and had several driving scores, while also adding six rebounds to his final state line in the close win. After Chester made a fierce comeback, it was Heath’s free throws that sealed the deal from the line to help Abington win it 53-50.

Konrad Kiszka (2019/La Salle College HS)
The second of the two terrific sophomores in the La Salle starting lineup, Kiszka burst out for a team-high-tying 19 points, including a big-time baseline slam in overtime to help the Explorers overcome Carlisle. The 6-5 wing, who picked up an offer from Niagara over the summer while playing with the terrific Team Rio National squad on the Under Armour 16U circuit, was an efficient 6-for-9 from the floor, knocking down two of his three 3-point attempts as well as all five of his foul shots. Though he’s still working on his assertiveness, he also did a good job of fighting for eight rebounds, including three on the offensive end, and didn’t try to force things right back up. Very good fundamental player who will only continue to improve as his confidence grows.

DeShawn Millington (2017/Carlisle)
“Dey Dey,” as he’s known to his Thundering Herd teammates, has been the driving force behind 6A No. 7 Carlisle this season, and showed why with a terrific all-around performance in the overtime loss to La Salle. The springy, flashy 6-3 guard finished with 24 points, seven assists, four rebounds and three steals, getting into the lane at will and flashing some impressive creativity with the ball around the rim; he also got to the line 14 times. The only thing missing from Millington’s game today was a 3-pointer, but he still managed to leave all in attendance impressed in the losing effort.

Trevonn Pitts (2017/Cheltenham)
It’s tough to believe Pitts is only in his second year of playing organized basketball, because there’s not much the 6-2 senior doesn’t do. An athletic, slashing wing, Pitts had one of the highest-running motors at Widener all day, almost single-handedly bringing the Panthers back from 12 down in the fourth quarter to put a serious threat into Pennsbury before falling just short in a loss. But Pitts did all he could, pouring in 19 points to go along with a 16-rebound effort that no one in the gym matched all day. Seven of those caroms came on the offensive end, as he wasn’t afraid to match up with a much taller Falcons front line to come away with as many misses as he could.

Elias Revelle (2017/St. Thomas More, Del.)
Revelle was undoubtedly the top player from outside of Pennsylvania on Thursday, and he made it clear from the get-go of his team’s close loss against Philadelphia power Archbishop Ryan with 13 first-quarter points. He went on to lead the Ravens with 28, earning well-deserved MVP award for his efforts. Revelle scored most of his points on an array of impressive inside finishes, but the 6-foot-4 forward proved he could handle the ball well on a few athletic driving scores. The senior also had a thunderous one-handed slam in the third quarter as his major highlight moment.

Jamar Sudan (2017/Chester)
Sudan was all over the place for the Clippers – particularly during their comeback against Abington – as he led the way with 15 points and earned the award of MVP for his team in the losing effort. The 6-foot-5 senior forward added four rebounds, doing everything around the rim; he scored most of his points on impressive finishes down low, whether off the dribble or with lethal post moves. His driving score late in the game cut his team’s deficit to one possession, but his efforts were not enough to help Chester pull off the feat.

Kyle Thompson (2018/St. Joseph’s Prep)
Although he wasn’t dubbed the MVP for the Hawks’ in their defeat of Bishop Shanahan, Thompson made several clutch plays, all from beyond the arc, on his way to a double-double with 15 points and 10 rebounds. Thompson made shots from what seemed like every angle of the three-point line, whether he had a hand in his face or was wide open, as he made five of his eight long-distance attempts. The 5-11 guard, who already has an offer from Binghamton under his belt, should see several more Division I schools come on board for his shooting ability alone before you add in his ball-handling and defensive abilities.