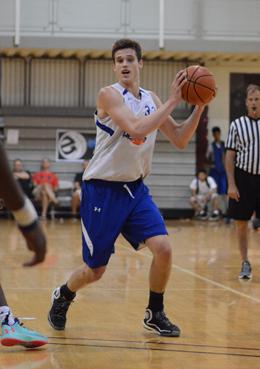 Matt Faw (above, in July) is one of the few Division I commits in District 1 this year; he's headed to Holy Cross. (Photo: Josh Verlin/CoBL)

Two seasons ago, Upper Merion wasn’t winning many games. The Vikings, led by then second year coach Jason Quenzer, finished 3-19, near the basement of the Suburban One American division.

Even as sophomores, this group showed why Upper Merion would be a force to be reckoned with in the coming seasons.

Like a fine wine, the class has gotten better with age.

After a junior year that featured a 16-8 record, 3rd place in the Suburban One American, and a tough district home loss to Academy Park, the Vikings’ seniors are back for one final season, with all of the talent and experience now under their belts.

For the first time, this group of seniors now have expectations to achieve.

“This class has been special for us because they have so many great kids, Quenzer said. “I think they have the opportunity to achieve something special this season.”

“It was a great moment to be with my family and it was a long time coming because I’ve been working at this my whole life,” the 2015 all-Suburban One League first team forward said.

Now entering the Pioneer Athletic Conference (PAC), where they will have a significant size advantage every night, the Vikings will rely on a strong defense and experience to carry them. Coming in as the favorites to win the conference in their inaugural season, the Vikings will have targets on their backs from the opening night, when they face Methacton on December 13th.

“We’ve got a lot of experience, with all of our seniors,” Quenzer said. “Our defense will dictate the flow of the game and we know it’s gonna be tough every night so we have to bring our defense.”

With Faw and Miller in the frontcourt, it’s easy to see why Upper Merion is viewed as one of the top teams in both the PAC and District 1’s 5A classification. Faw has worked hard on his post game on the inside to both score and rebound. He’s a high energy big man who plays great interior defense. Offensively, Faw is most lethal when he steps out to knock down mid range and three point jumpers.

Miller is a lights out shooter from the wing, and at 6-foot-6, can corrall plenty of rebounds in his own right.

“Those two guys have really stepped up through the years,” Quenzer said. “They have really progressed and matured throughout their high school years into great players and great young men.

“Matt is at a level where he’s the hungriest player I’ve ever seen, and Ethan is quieter but he leads by example,” he continued.

Along with Faw and Miller, the Vikings are loaded with senior talent across the board. Newell, a proven ball handler, scorer, and distributor, looks to cause nightmares for opposing guards at both ends of the floor.

“Aidan is one of the best ball handlers I’ve ever seen in high school basketball,” Quenzer said.

Senior Chris Carita is another big man to help grab rebounds, and Andrew Persaud is a lights out shooter from beyond the arc.

With all of these seniors both in the lineup and coming off the bench, Quenzer is setting expectations high for his team right off the jump. Entering a league with a lot of guard heavy teams that like to shoot it, Upper Merion will have to adjust due to their size, and defend the perimeter better than they ever have.

“Our number one goal is to win the PAC,” Quenzer said. “We want to come in and win it in year 1 to set the tone.”

“We have the size advantage on the inside but we have to work on stopping the threes because we know that teams like PV, Methacton, and Spring-Ford can all shoot the three,” Faw said.

“I want to go undefeated in the PAC, redeem ourselves from last year in districts, and make it to states,” he continued.

With a rotation of almost entirely seniors, this is Upper Merion’s year to make history. With the talent and experience, it just might happen.