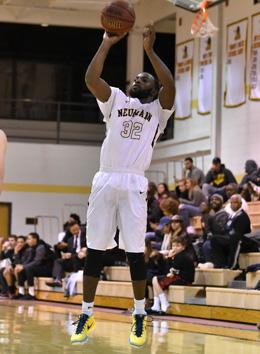 DeShawn Lowman (above) went from playing at a YMCA to eventually leading the top D-III team in the region. (Photo: Mark Jordan/CoBL)

Three and a half years ago, DeShawn Lowman was playing some pickup basketball at his YMCA in Wilmington, Del.

After his plans to be a preferred walk-on at Saint Joseph’s fell through in 2012-2013, the 6-foot-1 guard was willing to do anything to get another chance to play college basketball.

The Concord (Del.) grad worked hard to get faster, stronger, and better, before he was eventually spotted at a YMCA open gym by a first-year head coach looking for more recruits to add to his team.

“I really owe him everything,” Lowman said of his coach and mentor. “I look up to him on and off the court.”

And from that very day, Lowman has made the most of it.

“He was my first recruit and from the time he’s been here he has been everything we look for and then some,” Rullo said. “He’s a kid who puts his nose down, plays hard, and makes plays at the right time.”

Since arriving on campus, the criminal justice major has worked hard both on the court and in the classroom, maintaining a 4.0 GPA while averaging double digits in points for each of his first three years.

Lowman made an immediate impact as soon as he arrived at Neumann, averaging 12.3 points and 5.7 rebounds per game, en route to the CSAC Rookie of the Year award.

As a sophomore, the all-around guard started in all 28 games, averaging 14 points a game while leading the team in both assists and rebounds. He earned CSAC all-academic and first team honors as his team took home the league title.

Even if the team failed to repeat as CSAC champions in Lowman’s junior year, the Delaware native had easily his best season as a Knight. He was the only player to start every game, led the team in scoring with 17.8 points a game, eclipsed 1,000 points on his career, and received a ton of postseason awards.

From performance, to academics, to sportsmanship, Lowman exemplifies everything a coach and a program can look for in a collegiate athlete. He received national recognition for his performance both on the court and in the classroom, earning the CoSIDA Academic All-America award at the end of last season.

Lowman is now back for his final year, and for his teammates, there is no doubt who is the heart and soul of this team.

He did not have had his best game on Saturday against Gwynedd-Mercy, scoring only ten points on 2-of-8 shooting from the field. But that didn’t stop the Knights’ captain from playing 38 minutes, pulling in seven rebounds, dishing out six assists, and sinking four late free throws to clinch a 90-78 win.

Whatever the Knights need their senior guard to do, he is happy to help.

“Tonight I had a rough night but as a senior it’s my job to make sure everyone else gets involved, guys like Kenny Jackson and James Butler, who both had big nights tonight,” Lowman said. “Even if I’m having a bad night, my job is to make sure we get the win, and that I keep these guys grounded and focused.”

Neumann is now undefeated (6-0), on top of the CSAC (3-0), and will be favorites to win the league title this year.

But the Knights and Rullo have even higher aspirations.

“I appreciate that Rullo gave me this opportunity,” Lowman said. “He told me when I first got here that the goal was always to eventually win a national championship, and we feel like we have a chance to do that this year.”

Just three and a half years ago, he was playing at the YMCA. Now, he’s the leader of one of the top Division III teams in the country.

“When you’re lost, you have to find that light, and Rullo showed me the light to find the love for the game again,” Lowman said of his fourth-year head coach.

Rullo may have showed him the light at the end of the tunnel.

But Lowman still had to have the courage to run through it.

“He’s a 1,000 point scorer, played in 3 conference championships, won a lot of awards, and has earned the respect of everyone in the locker room,” Rullo said. “He’s accomplished a lot in his great career.”