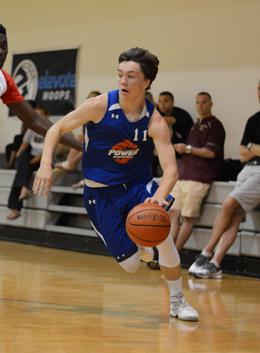 The Vikings came up short, with a loss to Ridley that night and eventually Pennridge in playbacks, but with their two top leading scorers returning as seniors, Perkiomen Valley looks to be a title favorite in the newly-upgraded Pioneer Athletic Conference.

Perkiomen Valley would often hold the ball well over a minute, and Poysden’s plan worked wonders in upset wins over Phoenixville and Cheltenham, even nearly delivering the Vikings a league title in a controversial finish against Spring-Ford.

“Last year we had to slow games down because our bench was short, but this year we’ll just have to wait and see because we have more options on the bench and a lot of guys that have improved this offseason,” Poysden said.

With seniors Justin Jaworski and Sean Owens in the backcourt for Poysden, this team has the potential to create nightmares for opposing guards.

Joined by potential breakout player Tyler Stretchay and forward Hogan Millheim in supporting roles, the Vikings will rely heavily on big minutes and big points from the starting five for the second consecutive season.

Stretchay, a sophomore, broke into the varsity rotation as a freshman, playing more and more minutes down the home stretch last season. He enters the starting lineup now, with the ability to knock down shots from anywhere and beat defenders off the dribble.

Jaworski enters this season with all eyes on him, as the highest returning  scorer in the PAC. Equipped with five Division II offers, the 6-foot sharpshooter will be looking to impress and finally pick up his first Division I offer.

“Justin is a special kid because he will do everything necessary to be successful,” Poysden said. “He has to be patient because he will draw every best defender and he has to know and trust in himself and his teammates.”

A two-sport athlete who holds the PAC record for receiving yards as a wide receiver, Jaworski’s season appeared to potentially be in jeopardy after he was tackled awkwardly on September 16th, partially tearing his MCL.

“When it happened, it could have been way worse than it was for both football and basketball, but I was lucky to be able to get back and play in the big rivalry,” Jaworski said.

Joining the Vikings superstar guard in the backcourt is Owens, another two-sport athlete, who has proven himself to be a great ball handler who can knock down open shots from beyond the arc.

Between Jaworski’s 19.7 points per game and Owens' 10.1 per game, the Vikings return plenty of scoring to the lineup.

The question is, how do the Vikings replace Sean Moriarity and Cullen O’Connor, two graduated seniors who pulled in a huge chunk of rebounds last season? If Perk Valley was undersized last year, they face even bigger challenges this year.

Standing at 6-foot, Millheim provides the inside presence that Perk Valley will need in the paint when they go up against bigger teams, specifically PAC newcomer Upper Merion, who features three forwards over 6-foot-5 in its starting lineup.

“I’ve been playing as a big man my whole life, I’ve pretty much been this size since the sixth grade,” Millheim said. “I’ve got to get even better at rebounding and boxing out.”

Not only do the Vikings have to replace the points and rebounds from O’Connor and Moriarity, but their leadership on and off the court will be missed.

“I don’t think you can really replace them because they brought it every night and they were great leaders off the court,” Jaworski said of his former teammates.

After coming within seconds of a league title, and within minutes from a state playoff berth, there are two major roadblocks that this team would love to clear this season.

Night in and night out, it might not be pretty with Perk Valley.

“With Justin and Sean out there on the court, no matter what the score is or the time remaining, you never feel like you are out of any game,” Poysden said.