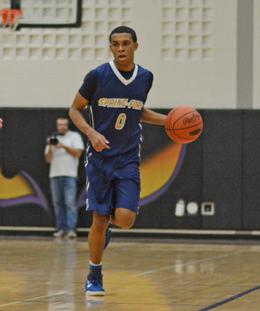 Chucky Drummond (above) and his fellow Spring-Ford seniors have big shoes to fill after a 23-win season. (Photo: Josh Verlin/CoBL)

After a disappointing 2014-2015 campaign, which saw Spring-Ford finish under .500 in league play and get bounced early in districts, Rams head coach Chris Talley challenged his seniors to bring the Pioneer Athletic Conference title back to Royersford.

Little did Talley and the Rams know that the 2015-2016 season would end up as the best season in Spring-Ford history. Riding the coattails of the senior trio of Nigel Cooke, Cam Reid, and Matt Gnias, the Rams finished with a 23-8 record, a league title, and the school’s first state playoff win.

But as Talley admits, this team has to replace a senior group that accomplished more than any other group in school history.

“Two years ago we lost three great players and we finished under .500 in the league,” Talley said. “These guys all know that and they want to make sure that it does not happen again.”

As Spring-Ford looks to replace those three seniors, who combined to average 37.6 points last season, they will rely on a plethora of guards to get the job done.

Drummond will slide over into the point guard role, as he tries to fill the shoes of Gnias and his 15.7 points per game. The 6-foot point guard knows that he has to be more consistent than he has been in the past.

“I’ve been waiting for this moment for a long time,” Drummond said. “I just have to work on being consistent, getting more shots up at the gym, and making sure I can score double digits every night to help us win games.”

Drummond, who scored 9.7 points per game as a starter last season, will be forced into the spotlight to score even more, and much more consistently than he did last season. An excellent talent, Drummond will have to prove that he can put up double figures each and every night, even as defenses key in to stop him much more than they did last year.

Talley will also rely on his two other experienced seniors, Geremski and Fitzpatrick, who both played in limited roles off the bench last season. From Geremski’s defensive tenacity to Fitzpatrick’s sharpshooting from the outside, the Rams need every ounce out of production out of both of them to make up for the lack of scoring depth in the Rams starting lineup.

“We need to make sure that no one tries to do it alone,” Fitzpatrick said. “It’s going to be a whole team effort to replace Nigel, Cam, and Matt, and the seniors have to get the young guys to really buy in.”

“Adam is providing the leadership that Matt and Nigel provided last year,” Talley added. “He does it all, he can cover a 6-foot-5 guy, he can cover a point guard, he facilitates, he rebounds, and he does anything and everything to help this team win.”

For the Rams, it will be the development of the excellent young talent that determines just how far this team can go.

Joining the senior trio for the Rams in the starting lineup are juniors Nestor Diaz and Austin Hokanson, both having made big improvements in their games since the spring.

Hokanson comes into the winter of 2016 as the Rams most improved player, who spent the whole offseason in the gym, and has caught Talley’s eye as someone who has bought into the system.

“Austin had a really nice offseason, he’s focused on getting stronger, getting better, and I think it is really going to pay off for him this season,” Talley said.

Diaz, who started last season as a sophomore, offered limited offensive production, scoring only 3.8 points per game. But what Diaz brings to this Spring-Ford team is defensive tenacity, an improved offensive game, and varsity experience.

The Rams also feature a strong sophomore class, who will look to make their first appearances on the varsity floor this year. From the big Robert Bobeck, to the athletic Noah Baker, one thing the Rams have is plenty of players capable of competing for minutes this season.

“We would always like to play 10, if we don’t have a significant drop off and it keep guys fresh, then it’s a good problem to have when we have so many viable options off the bench,” Talley said.

With Upper Merion joining the PAC with a talented senior group to battle it out for the title, the Rams will have to compete in a difficult Liberty division, alongside Perkiomen Valley and Methacton, to make the PAC’s first ‘Final Five.’

As defending league champions, Spring-Ford knows they will have the targets on their backs each and every night in PAC play.

But Drummond and his teammates are ready to defend the league title.

“If we do what we have to do, we can beat any team in this league, and I’m excited to play everyone,” Drummond said.