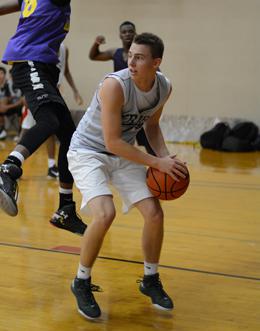 Pat O'Neill (above), headed to Villanova next fall to play baseball, is Methacton's leader on the hardcourt as well. (Photo: Josh Verlin/CoBL)

Coming off the best season in school history, with a league championship and a state playoff win in 2014-2015, Methacton head coach Jeff Derstine knew it would be tough to replace seven seniors entering last season.

Finishing with just five league wins last year, and a 6-16 record overall, Methacton struggled mightily at both ends of the floor to compete with more talented, balanced teams.

This year, the Warriors are back.

Equipped with a solid senior class and an infusion of young talent into the lineup, Methacton is ready to compete with Perkiomen Valley, Spring-Ford, and Pioneer Athletic Conference (PAC) newcomers Upper Merion for a league title.

Highlighting the senior class is Pat O’Neill, a multi-sport athlete who next fall is headed to Villanova to continue his baseball career, but not before he serves as the most experienced player on the roster.

O’Neill, who was a part of the 2014-2015 rotation as a sophomore, is the unquestioned leader of his team, having been through both the highs and lows of the last two seasons.

“I saw the importance of being a team,” O’Neill said. “I had a great opportunity to play with a lot of those guys who were great friends and saw how well we could do when we played together.”

O’Neill sees an opportunity with this team, to try and make this season more like two years ago, and put the failures of last season behind them by competing yet again for a title. It’s also the shortstop’s last chance to play with many of his friends in high school.

The Villanova commit averaged 6.9 points per game last season, and returns as a solid, scrappy guard who contributes at both ends of the floor. Joining O’Neill is Crandell Jones, a shifty point guard who can also expect a larger role in the offense.

While Methacton may have only won six games last season, they still have to replace a bunch of talent from the senior class. Both Stephen Savage, a big 6-foot-3 center who averaged 9 points per game, and Jake Cardarelli, a guard who got lots of minutes in the Warriors backcourt last year, depart, leaving room for plenty of newcomers to the rotation.

And the Warriors may have the perfect replacements for both of them entering the 2016-2017 campaign: underclassmen.

Both David Duda Jr., a sophomore sharpshooter, and Jeff Woodward, a promising freshman big man, bring talent and versatility to the Warriors lineup.

Woodward enters the PAC as the tallest player immediately, which will make it difficult for smaller teams like Spring-Ford and Perkiomen Valley to match up. Already a physical talent at 6-8 and 225 pounds, he’s got a terrific face-up game and certainly looks like he has Division I scholarships in his future.

“Jeff’s got great hands, sees the court well, he’s got some moves in the post and he’s unselfish,” Derstine said. “He’s excited to be a part of the team.”

“If you make a mistake defensive mistake, he can erase it for us,” the Warriors’ seventh-year coach added. 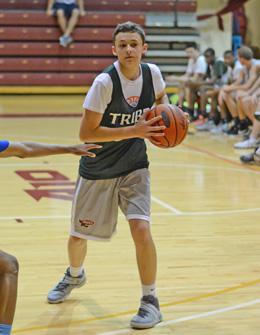 Duda, the son of Saint Joseph’s assistant coach David Duda, impressed many this summer with his ability to shoot lights-out from beyond the arc, which fits right into Derstine’s plans for this Methacton team.

Along with Duda, sophomore guard Marcus Girardo looks to make the jump straight from freshmen basketball to varsity hoops, bringing excellent ball distribution to the backcourt as a speedy 5-foot-11 guard.

With O’Neill, Jones, Duda, and Girardo, the Warriors have a versatile backcourt that can compete with the best of the PAC.

Throw in the size and defensive presence that Woodward brings to the frontcourt, and Methacton has the pieces to win a lot of games.

While Methacton is certainly more talented than they were entering last season, Derstine admits that there is still work that needs to be done if they want to make the PAC playoffs come February,

“I think it’s continuing to work on the individual skill developments, where guys individually try to get better and bring new aspects to the team,” he said.

“Playing really good team defense and continuing to scrap and focusing on the fundamentals still have to be our main focus,” O’Neill added.

The league is looking as competitive as it ever has, and Derstine believes his team can compete with anyone.

“I think the new additions really strengthen the league, and there’s going to be a competitive balance across the league this year, which should make for a lot of great league games,” he said.