The Basketball Tournament has returned for another weekend! The $2 million, winner-take-all tournament full of former college stars and current international pros has already been reduced to its final sixteen teams, who converged on the city of Philadelphia for this weekend's Super 16 and quarterfinals.

Here's the schedule for the first day of Super 16 action (for our super 16 preview, click here):

We'll be live-blogging all day long with results, highlights, photos and quotes; keep checking back throughout the day! 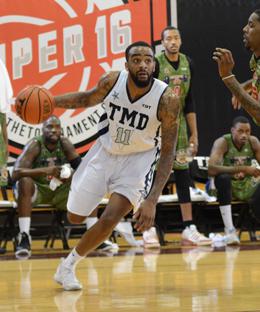 Stanton Kidd (above) drives baseline for TMD in the first of four Super 16 games on Thursday. (Photo: Josh Verlin/CoBL)

2:00 PM
South region No. 8 seed Trained to Go, natives of Georgia who enter the round of 16 on the wings of a thrilling victory over top-seed Bluff City Blues (Memphis alumni), which they won 83-82 thanks to two late threes by Brandon Robinson. As for their opponents, Marshall Henderson (Ole Miss) leads the fifth-seeded TMD into the weekend's first game, alongside the likes of Bob Young (Arkansas) and Mike Brusewitz (Wisconsin).

2:42 PM
After trailing early on, Trained to Go was able to build up the biggest lead of the half, 33-19, with about five minutes to go with an 8-0 run. TMD fought backing the waning minutes, clawing back to within six with under two minutes to play, and a buzzer beater three by Christopher Warren has TMD entering the break down just 42-37.

Young and Warren lead TMD with 12 points each, while the leaders' top scoring effort is from the man that got them here, Robinson, with 13.

3:50 PM
Trained to Go, after going down 57-48 to start the half, clawed back and ended up puling away, to win by a final of 83-73 and move on to Saturday's quarterfinal round. The win puts the eight-seed within three wins of the $2 million prize, but that's not necessarily the way they see it.

“It’s a situation where every game is going to be a tough one, it’s nice to be one game closer. It’s three games, but we need to take it one game at a time," Brian Harper added. We’ve got a resilient group, and we’re all confident in each other.”

Marshall Henderson received a technical foul with just over five minutes to go, down by only two points, and from that point on, Trained to Go stuck together and were able to took control, going on a 12-1 run.

The Georgia natives will take on the winner of today's night-cap, between Ram Nation and Overseas Elite.

4:00 PM
In the second game here at Philly U, the defending northeast regional champions,  #1 City of Gods, takes on Maalik Wayns and #5 Team F.O.E. Both of these teams worked through tough battles in their first and second round games to get to this weekend, and, at least in the case of City of Gods, they'll be adding to their rosters players who weren't around last week, like Xavier Silas and James White.

4:45 PM
In a foul-heavy, hard-fought first half, City of Gods jumped out to an early lead before being answered by Team F.O.E., who had things knotted up at 18 by the nine-minute mark. A strong finish to the frame allows City of Gods—who have used their size to advantage, going to work on the glass—to enter the half up 51-40.

Leading the way in a balanced scoring effort for City of Gods is Iasan Kromah with 11 points. Wayns also leads F.O.E. with 11.

(We apologize for our lack of coverage recently, this is due to a lack of internet connectivity in the arena.)

8:00 PM
The first half between Boeheim's Army and Untouchables was hard-fought and physical, with the Pitt alumni taking a commanding lead late in the frame, before their counterparts ended the half on a 6-0 run to enter the break down 40-34. An 11-5 run to start the second would allow the 'Cuse alums to lead 46-45 early on, and it's been neck-and-neck ever since, with both teams finding their rhythm as we enter the final twelve minutes locked at 50.